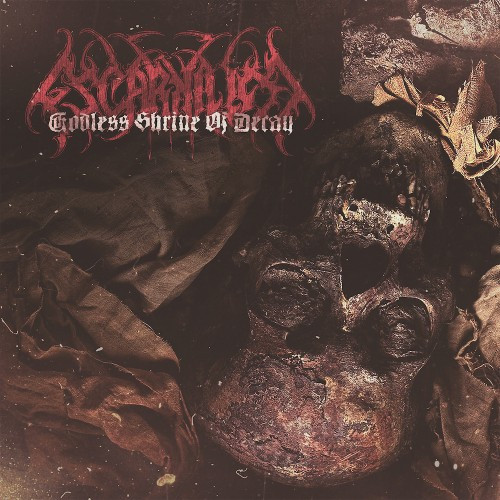 Earlier this year the Brazilian death metal band Escarnium signed a North American deal with Redefining Darkness Records, looking ahead to the release of their next album. To pave the way for that, Redefining Darkness is releasing Godless Shrine of Decay, a compilation that includes selected cuts (all of them remastered) from the band’s previous releases as well as one new song, and we’ve got a full stream of this godless shrine for you today. It seems only fair to issue a warning in advance: Prepare for a ravaging onslaught of hellish old school death metal.

The album hits the ground running (“marauding” would actually be a better word) with “Radioactive Doom” from the band’s 2014 single Genocide Ritual and then moves to “Human Waste”, the previously unreleased track that’s included on the album. From there you get the title track from that 2014 single, seven decimating cuts from the band’s 2012 debut album Excruciating Existence, five tracks from the 2011 EP Rex Verminorum, and the title song from their first demo, 2009’s Covered In Decadence. 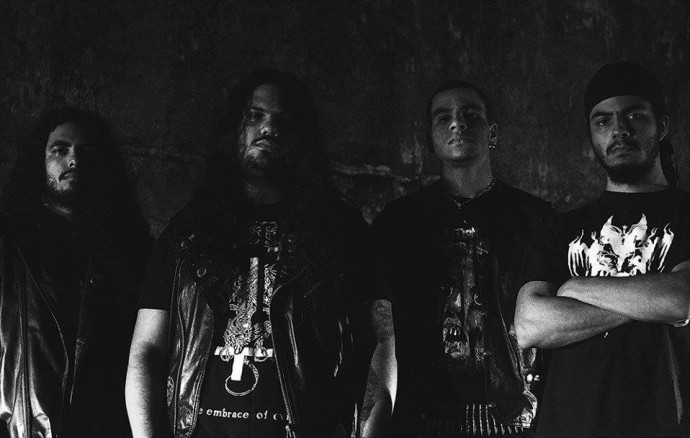 Escarnium pay their respects to vital names like Vital Remains, Incantation, and Immolation, while proving their own knack for writing and executing songs of soul-plundering savagery and relentless ruthlessness. Because the album moves progressively backward in time, you can also get a sense of the band’s evolution as you make your way through the music. Even the older tracks succeed in melding dismal, gruesome atmosphere with unbridled ferocity, but the newer songs also display a more sophisticated integration of melody and dynamic movement (as well as more dynamic vocals), without sacrificing the blackened death worship at the music’s core.

This album may have been designed as a retrospective and an introduction to Escarnium for new listeners, in preparation for their next release, but it’s well worth having in its own right — solid, head-wrecking, bone-grinding death metal that exudes evil from beginning to end.

Godless Shrine of Decay will be released on November 20 and can be ordered at Bandcamp via the first link below.