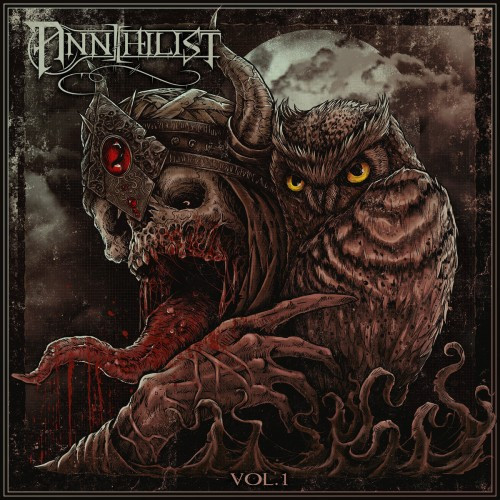 Never underestimate the value of good album art. After all, first impressions DO count.

For every cheesy cgi monstrosity, for every uninspired and multi-hued “cosmic” abortion, for every generic “war is bad” post-apocalypse or totally brutal “I’ve never been consensually touched by a woman” guts-n-gore album cover, there’s something far more interesting and eye-catching out there, something that stands out from the pack and practically yells “check this out!”

Such is the case with Australian metallurgists Annihilist and their debut EP Vol. 1. 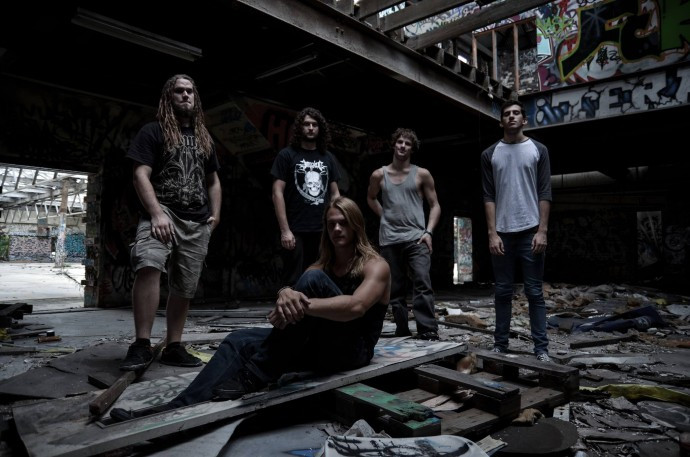 Of course, kick-ass artwork doesn’t always mean that the music is going to be of a similar quality, but in this case I’m glad to say the stars have fully-aligned, as Vol. 1 is an undeniably potent shot of metallic adrenaline which leaves a very strong, and very favourable, impression behind that hints at bigger, and better, things to come from the group.

Calling the band “Technical Death Metal”, as you’ll find them tagged on Metal Archives (though it’s worth noting that the band themselves don’t seem to make any such claims) is a bit of a misnomer, however, as what you’ll find here instead is five tracks (and one piano-led interlude) of razor-sharp Thrash/Melodeath/Metalcore hybrid riffage akin to long-time NCS favourites Himsa and Conducting From The Grave, liberally laced with some more overtly technical flourishes reminiscent of early Arsis.

Granted, there’s little here that’s particularly unique or original, but despite that there’s just something about this EP (particularly in its more Himsa-ish moments) that really scratches an itch for me.

A lot of that is probably down to the fact that the Aussie quintet display a keen grasp of interesting, hook-loaded song-writing across the length and breadth of this EP, employing their undeniable talents in precision bursts of targeted technical prowess.

Add to this a surprisingly nuanced and organic drum performance that largely eschews the quantised extremity favoured by so many of their peers, as well as occasional flashes of pleasingly proggy instrumental introspection, and you have all the ingredients required for this band to make a real killing.

One thing that might prove divisive however (amongst readers of this blog at least) is the pseudo-melodic growl employed by vocalist Harry Pendock, whose delivery and vocal phrasing is situated somewhere between that of John Pettibone (ex-Himsa, Heiress), Piotr Wiwczarek (Vader), and Robb Flynn (Machine Head).

In context, however, I actually find this makes for an interesting choice. Despite the comparisons I’ve made above, it’s not necessarily the vocal style you’d immediately expect to be paired with this sort of music, and I can wholly imagine that when the vocals kick-in at 01:40 of “Solace in Suffering” (following a riveting parade of sharp-toothed riffs and an all-new clean guitar intro) it’s going to make or break the band for a number of people.

I’d definitely encourage new listeners to stick with it though, as the vocals have definitely grown on me with repeated exposure, and you can’t deny that they definitely bring an unexpected dash of flavour to the EP (for better or worse).

Following the re-recorded/reworked versions of “Solace in Suffering” and “Sink” (both of which saw an initial digital release back in January), “Prevail” provides another great showcase of the band’s talents, melding some impressively agile, technical fretwork to a chugging, shuddering rhythmic attack and an undercurrent of rumbling, infectious groove, along with some sizzling lead/rhythm guitar interplay that errs more towards the Tech-Death end of the spectrum.

You’ll also notice that, interlude-track “Echoes” aside, the songs on Vol. 1 tend towards the 6+ minute mark in length. Yet they rarely feel anything like that long, with the sheer variety of riffs on offer and the multitude of gripping hooks and dynamic changes the band employ ensuring that not a single moment of the EP feels superfluous or unnecessary, as the songs rattle by in a flurry of scything guitar parts and perilously punishing percussive salvos.

The hook-heavy “Against the Wall” for example certainly doesn’t feel anything like a six-minute song, although it’s packed to the gills with blisteringly melodic lead parts and chunky, groove-friendly rhythms, leading to a complex and multi-layered finale of prog-tinged instrumentalism and solemn, piano-driven melancholy.

The band really go all-out for the catchy complexity of “Embers”, the EP’s Conducting From The Grave-esque finale though, unleashing a hefty array of heaving, thrash-groove riffs, stomping Death Metal-inflected rhythm patterns, spiralling lead guitar melodies, and nuanced, progressive fretwork — topped off with some undeniably snappy, aggressive-yet-melodic, vocal hooks – which ultimately culminates in a grandiose and grin-inducing instrumental finale that ties the whole thing together with a neat little bow.

So if you’re looking for something on the Thrashier, Deathlier edge of the Metalcore spectrum – something both heavy and hooky, which subtly blurs the boundaries and distinctions between sub-genres whilst also delivering a healthy heaping of righteous aggression and carefully measured technical know-how – then Annihilist might just be the band for you.