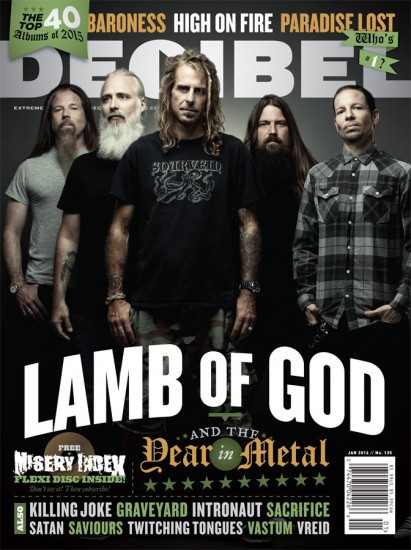 Every year our Listmania series of posts includes not only lists of the year’s best releases as compiled by our staff, invited guests, and our esteemed readers, but also lists assembled by what we call “big platform” web sites and selected print magazines. Today we feature the first of the 2015 lists we’ve seen from that category of web sites and print zines — and fittingly, it comes from the best metal magazine on the planet, DECIBEL.

The list appears in the January edition of DECIBEL, which features Lamb of God on the cover and is beginning to arrive in the mailboxes of subscribers now. My copy is taking its sweet time making it to my mailbox up here in the far northwest corner of the U.S., but a friend on the East Coast sent me pics of the list, which is why I’m able to bring you this post. I know I’m stealing some of DECIBEL’s thunder, because they haven’t posted the list online themselves. But I’ve been doing this thunder-stealing for six years now, and it’s too late to stop.

Year-end lists serve several useful purposes. One, of course, is to introduce fans to albums they may have overlooked. I also know people who don’t buy much music during the year and actually wait to read year-end rankings before preparing their shopping lists. And, perhaps most obviously, they give us something to discuss and argue about. Because, duh, we don’t have enough to argue about already.

I usually try to hold my own comments to a minimum when I post these year-end lists, but here are a few observations about this one, which I must preface by saying that I managed to miss listening to about a third of the albums on the list.

First, I’m delighted to see Panopticon’s new album ranked so highly, especially because Austin Lunn made the decision not to distribute the album widely for reviews or to engage in any of the other usual promotional activities for it.

Second, I’m also delighted to see talented upstarts like Crypt Sermon and Khemmis make the rankings, and it’s great that Skepticism (of whom I became a slavish follower after witnessing their daylight performance at MDF this year) made the Top 10.

Third (and on the negative side of things), while I heartily applaud the Top 20 ranking of Leviathan, Mgła, and False, the list is pretty light on black metal; I can already hear the gnashing of teeth over the inclusion of Myrkur and Deafheaven over a myriad of other qualified BM contenders (though I do like both of those albums).

Fourth, I’m expecting lots of commentary about the choice for Album of the Year. But that’s always true.

So I’ll stop there and let you guys pick up the conversation below.

P.S. If you’d like to read what DECIBEL has to say about each of the albums on the list, you can order the January issue here (it comes with a limited edition flexi disc by Misery Index).

P.P.S. There are lots of other lists in this issue, including the “Top 5 Dumbest Band Names That Aren’t Black Pussy”, topped by Make Me A Donut.