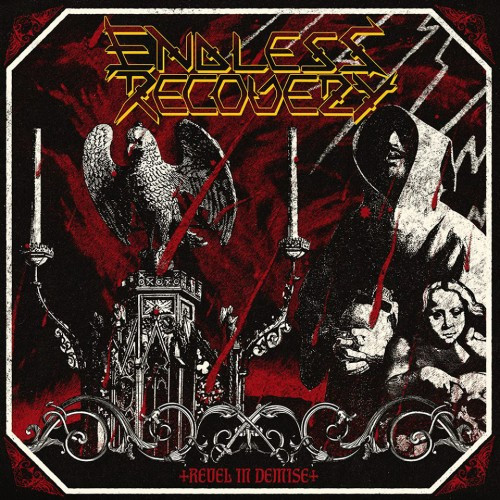 This is kind of an odd Saturday. Here in the U.S., it’s the middle of a long holiday weekend, two days after Thanksgiving, a day after Black Friday, and two days before what snake oil peddlers have annointed “Cyber Monday”, when people get back to their high-speed internet connections at work and are encouraged to buy shit online that they don’t need, with money they don’t have. Hail Satan!

Anyway, I’m not sure if anyone will be visiting us today, but I’ve stitched together some (mostly) new music anyway, because instead of leaving my house to spend money yesterday I hunkered down and doused myself with a few hours of new metal. Much more satisfying and much less costly.

I decided to start this round-up with a healthy heaping serving of high energy, beginning with a blast of speed metal from the Greek band Endless Recovery. The band’s new album (their second full-length) is named Revel In Demise, and it’s set for release by Witches Brew on December 24.

Two songs from the album are up on Bandcamp now (and available for download), the title track and “Reaping Fire”. Both of them will get your adrenaline flowing and your blood pumping with a flurry of catchy-as-fuck riffs and barreling drums.

Apart from the quality of the blistering riffs, two aspects of the music have really grabbed me — the skin-stripping savagery of the snarling vocals and the melodic elements in the songs (including in the excellent solos), which make them even more memorable. Really good stuff!

Below you’ll find the Bandcamp stream and also the band’s official video for “Reaping Fire” — which is hellish fun to watch. 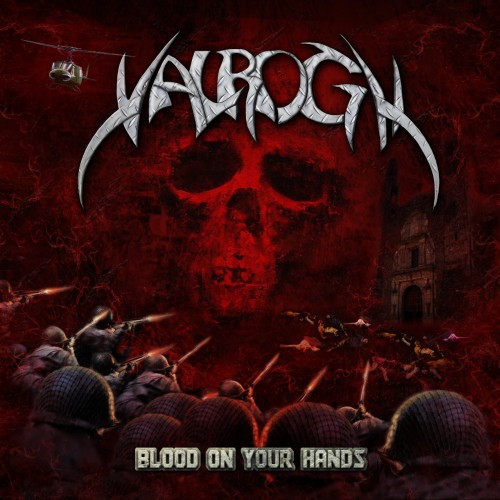 Okay, here’s how I came across this next song:

1.  Our frequently unhinged friend Phro posted a video of a baby skunk bothering a young Fennec fox on my Facebook wall, with the words: “Some days you just don’t want a baby skunk sniffin’ your ass.”

4.  I then decided to see if I could find a metal song called “Speaker for the Dead” to post in reply to that presumptuousness.

And with the help of Metal-Archives, I found a song by that title, which turns out to be a track from a recently released debut album by a Mexico City band named Valrogh (which appears to be the new incarnation of a band previously named Incest that recorded a series of demos back in the mid- to late-’90s and then went dormant. The album’s name is Blood On Your Hands.

“Speaker For the Dead” delivers flame-throwing thrash that’s evil, eviscerating, and highly contagious. Once again, the nasty vocals (joined by gang shouts) are very appealing (as you may have guessed, I’m not a fan of thrash with screeching clean vocals), and so is the turbocharged riffing in this song. Great dual-guitar solo, too.

Five more songs from the debut album are available for listening on Soundcloud (here). I haven’t yet made my way through all of them, but the two others I’ve heard kick as much ass as “Speaker For the Dead”. Unfortunately, I can’t tell you how to get this album. 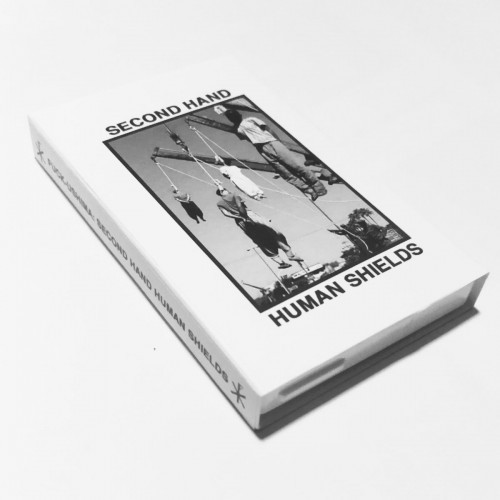 I’m staying in the fast lane for this next item, but switching genres.

The next band is delightfully named Fuck-Ushima, and the name makes sense, because the music is a combination of “fuck you” and a nuclear detonation.

These maniacs are from Tampere, Finland, and their latest release is an EP entitled Second Hand Human Shields. When I saw it, I felt compelled to listen because the first track is named “Buttered Black Demon Shaft”. And don’t tell me you wouldn’t have done the same thing.

That opening track is a decimating rampage of punk-fueled grind and powerviolence, with thoroughly berserk vocals. There’s more of the same later in the EP, but that’s not all you’ll find. The second track, for example — “Injecting Dolphins With LSD” — is a goddamned destructive piledriver of sludgy riffs and shrieking guitar notes, and there are similarly bludgeoning hardcore grooves (and bleak, alien melodies) to be found in “Sheltered” and “€£​$​¥”. And the final track “Haunted By the Negative Past” is an utterly decimating crawl through a tarpit of poisonous sludge, replete with monstrous roars and an extended bout of feedback at the end that will set your teeth on edge.

But what all the songs have in common is a thoroughly black-hearted aura of violence and hatred. Don’t mistake the band’s name for some kind of joke — this is an absolutely pulverizing EP. 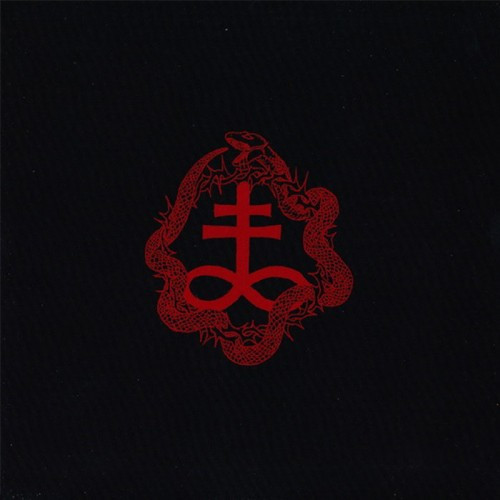 I wrote that this was a collection of (mostly) new music, and I wrote that because the next release originally came out in the spring of 2011. It’s a two-track demo named Tandava by the Norwegian black metal band One Tail, One Head. (The demo was re-relased on MCD and vinyl by Terratur Possessions later in 2011 in combination with the band’s earlier self-titled demo.

I’ve been meaning to write about Tandava for a while, and finally remembered that I hadn’t done so yet. You’ll get one clue to its quality when I tell you that this band includes members of Behexen and Vemod.

There’s a lo-fi production quality to the music that required some adjustment when I first heard it, but now the EP has gotten its hooks deep in my skin. The riffs are lethal, the drumming nearly steals the whole show, and the mix of horrific howls, growls, and crazed yells complete the music’s demonic aura in fine fashion. As diseased and as contagious as a plague outbreak, this really is the devil’s own rock ‘n’ roll.

Both Tandava and One Tail, One Head are available for digital download on Bandcamp (the links are below), though they’re pricey. 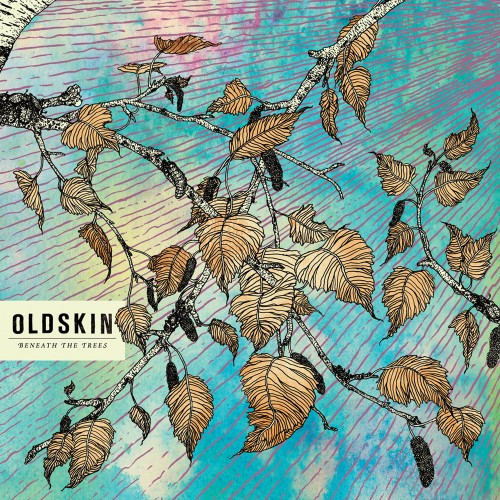 To wrap up this round-up, I’m switching genres again and turning to a song from Beneath the Trees, the final album by Old Skin (from Manchester in the UK), which was released earlier this month. The day after it was released, without fanfare or explanation, Old Skin announced on their Facebook page:

Old Skin is no longer a band.
Thank you to anyone who has ever been involved with us over the last two years.
We cannot thank everyone enough, but we can give you our album that we were planning on releasing early next year.

This is a sad development, because although Old Skin didn’t have a long life, they created some fascinating and tremendously powerful music while they were around.

The song I picked to feature is “Antibes”. If that riff at the beginning doesn’t grab you, I’ll be surprised. And if what follows doesn’t stave in your skull, then you’ve got a harder head than I do. But the song isn’t just a methodical hardcore beating (though it certainly is that), it’s also laced with guitar melodies that prove to be as catchy (and even dreamlike) as they are uncomfortable. And there’s a repeating bass-line that accompanies the mesmerizing finish to the song that will rattle your spine.

Attempting to succinctly sum up the rest of the album is impossible. Beneath the Trees is extremely creative and stylistically diverse — incredibly hard-hitting and enraged, disorienting, doomed and dispiriting, and/or spellbinding, depending on where you find yourself among its ten tracks. You’ll get a sense of what I mean if you let the stream continue after “Antibes” and encounter the title track.

Remarkably, for such a brilliant album, Beneath the Trees is available as a “name your price” download on Bandcamp. I’m including the full-album stream below, right after the song I chose. Trust me, the entire album is a gem, so to repeat — please don’t stop with “Antibes”