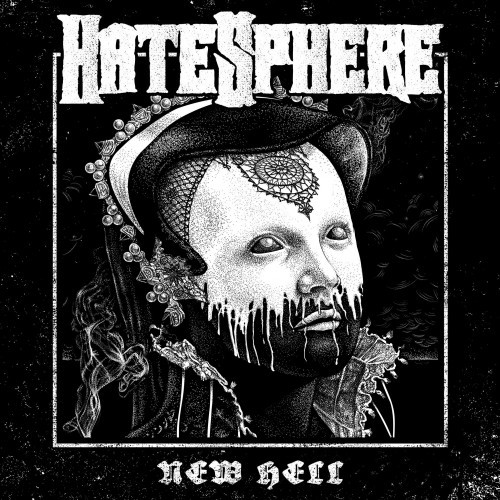 Out of all the bands that came out of the post-Haunted neo-thrash movement, my two favorites — and I’d argue to a point the objective best — have been Carnal Forge and HateSphere. I was a rabid devotee of HateSphere’s first five albums, but then the majority of the band left and founding guitarist and song-writer Pepe Hansen was forced to find new blood. Their output has had varying results for me since then.

I loved the music of To The Nines but couldn’t stand the weak vocals of Jonathan Albrechtsen in place of the band’s original vocalist Jacob Bredahl, who was as feral as it got. I LOVED The Great Bludgeoning; it had riffs, it had aggression, it had frantic energy — and the new vocalist and still current vocalist Esben or “Esse” Hansen had that vomitus tone to his vocals that called back to Bredahl, and the result was that he fit the music quite a bit. I enjoyed SOME of the bands next record Murderlust, but I have to admit that a lot of it was really forgettable. The thing is, I still love this band, even if they aren’t exactly the same band I used to love, but the spirit is definitely still there.

So I guess the question is where does New Hell stand?

If people don’t know exactly what I mean by neo-thrash, there was a period when a lot of bands were taking the Slayer/Testament school of thrash metal and mixing it with melodic death metal, mostly of the darker At The Gates or Arch Enemy sort, in the wake of the popularity The Haunted came into. It kind of is what it is, and you like it when you hear it or you don’t. HateSphere pull no punches in this regard, and I’ve always felt they were one of the defining bands of the style.

New Hell fucking rips, crushes, stabs, and destroys everything in its path and is the best HateSphere record since the mass-exodus of the main players of the first five albums. It has a raw energy that reminds me a lot of their debut self-titled. The opening song “The Executioner” begins with typical HateSphere skin-flaying riffs, especially the song’s main course, which feels like the sonic embodiment of death by a thousand cuts. I’ve always loved that the openings of their albums, whether in the form of intros or straight-into-full songs, have always lacked in the bullshit department, and this is one of the most vicious opening volleys a HateSphere album has ever tossed anyone’s way.

Riffs are HateSphere’s specialty, and I’m not sure where in the world Hansen pulls all this shit out from, but it’s insane the amount of sonic fangs and claws he manages to craft out of thin air. I was promptly made aware, again, of the magic at work when “Lines Crossed Lives Lost” came on with one of the most biting riffs I’ve heard in a while. The playing around with the opening riff and its verse riff variation is a cool touch, and the chorus is a whiplash free-for-all. The way they turn up the intensity of the chorus via vocal layering is pretty badass as well.

Except for the crawling groove of “The Long Haul” and the pitch-black death march of the closer “The Grey Mass”, New Hell as an album is non-stop, fast-as-fuck, relentless modern thrash metal at its finest and most intricate. Everything in classic HateSphere tradition is so tight, concise, and fucking pissed that I just feel any extreme metal fan of any sort has to find SOMETHING to enjoy here.

If you like music that spits in your face and breaks your nose with a sucker punch, relentless speed, relentlessly tight riffing that remains technical but never loses momentum, and some fantastic beat-down grooves, this is for you. One of my favorite albums of the year so far.

New Hell’s cover artwork is by Niclas Mortensen, it was produced by Tue Madsen at the Antfarm Studios in Aarhus, Denmark, and it was released on November 20, 2015, by Massacre Records.