As has been true of many of the bands we’ve featured in these backward-looking Rearview Mirror posts, Weakling had come and gone before I ever heard of them. But I heard a lot about them in the years that followed their demise.

The band apparently took their name from a song by Swans, from the album Filth. Bay Area guitarist John Gossard started the band, along with guitarist/drum programmer Robert Williams of Ubzub. By the time Weakling released their first — and only — album in 2000 (Dead As Dreams), the line-up included (in addition to Gossard — who also provided the vocals) guitarist Joshua Smith (The Fucking Champs), bass-player Sarah Weiner, drummer Sam Foster, and keyboardist Casey Ward.

The band split up in 1999, before the album was even released. According to The Font of All Human Knowledge: 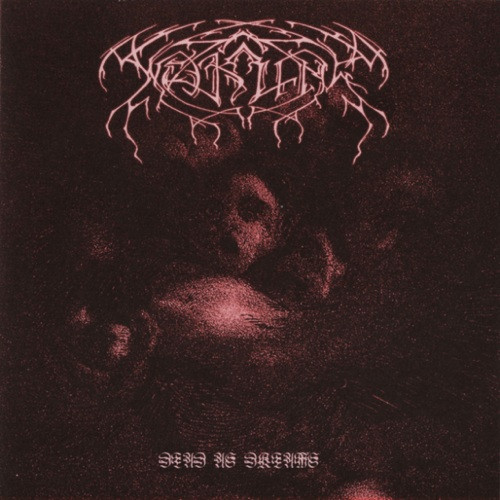 “Gossard and bassist Sarah Weiner later played together in the similarly short-lived doom metal band The Gault (although Weiner was the drummer of that outfit); after that band’s demise, Gossard went on to join established funeral doom outfit Asunder, and formed a second black metal band, Dispirit, in the wake of Asunder’s dissolution. Keyboardist Casey Ward currently plays drums in The Husbands. Drummer Sam Foster currently plays drums for death metal band Saros.”

All five of the songs on Dead As Dreams are long, ranging from 10 1/2 minutes to more than 20. The band’s music has been referred to as “a black metal-as-ambient Wall of Noise approach coupled with an epic songwriting style”, and (here) as “a cross between the atmospheric, monomaniacal, distorted black metal buzz of Burzum and the progressive, advanced death metal orchestrations of Opeth“.

When I’ve seen references to Weakling (by both respected writers and musicians), their name has been uttered in reverential tones. Listening to their music now, 15 years later, it becomes obvious how influential they were in turning black metal in new directions.

You can find the whole album streaming on YouTube. Below I’ve embedded the 20-minute long title track, which really is amazing.

9 Responses to “THE REARVIEW MIRROR (WEAKLING)”