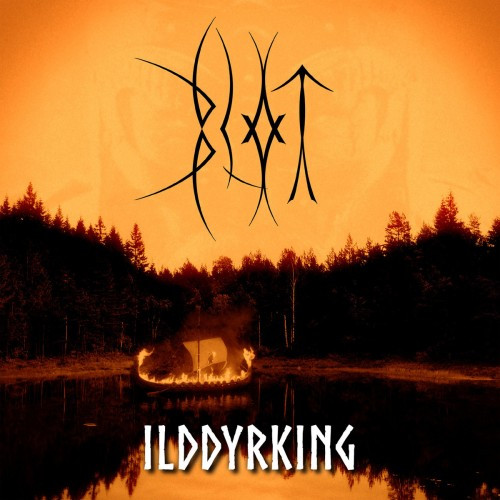 Long-time NCS reader and musician CarlSk sent me a very strong recommendation for this next band — so strong that I bought their new album before listening to it. The band is Blot, they come from southern Norway, and in mid-October they released their debut full-length Ilddyrking, which follows a self-titled EP from 2009.

Carl’s praise was fully warranted — this album kept me enthralled from beginning to end. The songwriting is top-notch and so are the performances, with each anthemic track delivering a mix of impassioned (and highly infectious) folk-tinged melodies, gripping riffs, pulse-pounding rhythms, and warlike vocal savagery. Thrilling acoustic guitar traceries are artfully interwoven in this rich pagan tapestry, along with the flames and blood of battle and the cold chill of northern forests.

Most of the time the music hurtles along at a gallop, and it doesn’t take much to imagine cavalry charges with swords and axes raised and a wolfpack racing alongside, teeth bared and eyes blazing. You don’t get much time to catch your breath until “God of War” slows the pace, a song with a medieval air in which the guitars almost sound like the skirl of pipes (that song also includes a wonderful guitar solo).

The back half of the album is just as strong as the first half, with the ripping headbanger “Death To All” and the dramatic march of “Victory” being personal favorites. Fittingly, the album concludes with an excellent cover of Dissection’s “Where Dead Angels Lie” from Storm of the Light’s Bane (with what sounds like a jaw-harp in the intro).

In a nutshell: Top-notch Viking/black metal with no weak spots — highly recommended. 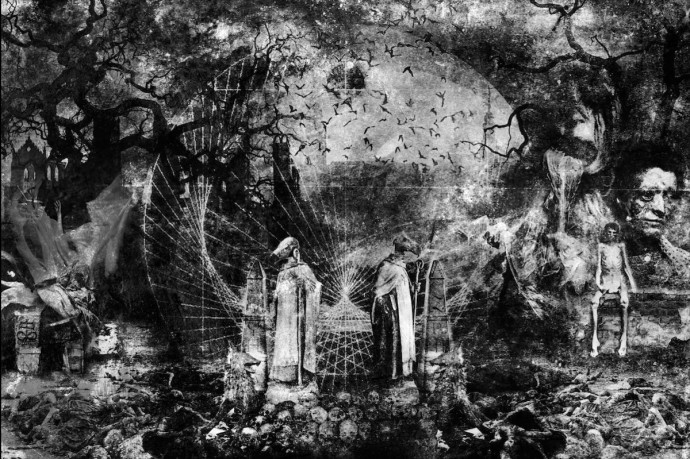 Denigrata proclaim from their Bandcamp page that they are “AN AMBIENT, TECH -FUELLED BLACK METAL COLLECTIVE FROM THE UNITED KINGDOM. BORN FROM NIHILISM, AVANT-GARDE DARKNESS AND FILTH.” That punched several of my buttons (as did the album art by Matt Vickerstaff at Darkwave Art), and so I punched theirs. To be precise, I punched “play” on the stream of their recently released first album Missa Defunctorum: Requiem Mass in A Minor at Bandcamp.

It’s a multi-textured and unsettling album, but one that kept me rooted in place, if for no other reason than to find out what would come next. It includes dark, sweeping, anthemic melodies; pile-driving, quasi-industrial drum rhythms; gravel-chewing bass lines; flickering wisps of electronica; dreamlike keyboard melodies; cataclysmic explosions and doom-like dirges; and a combination of wild shrieking and the voices of angels.

You’ll get a good sense of whether this is your cup of tea by listening to the album’s second track, “Kyrie Eleison”, which is where the Bandcamp stream is set to begin. It’s a storm of black noise punctuated by massive pounding and laced with dismal tremolo-picked guitars and demented electronic sounds — but there’s a slow, sublime melody and operatic soprano vocals awaiting you in the song’s second half.

I don’t mean to suggest that the rest of the songs sound just like this one — one of the album’s appealing features is its variety — but it will give you a sense of the band’s eclectic approach to songwriting and their penchant for shifting moods when you least expect it. It’s jolting and flesh-scarring one minute, hypnotic the next. I was fascinated by this album. 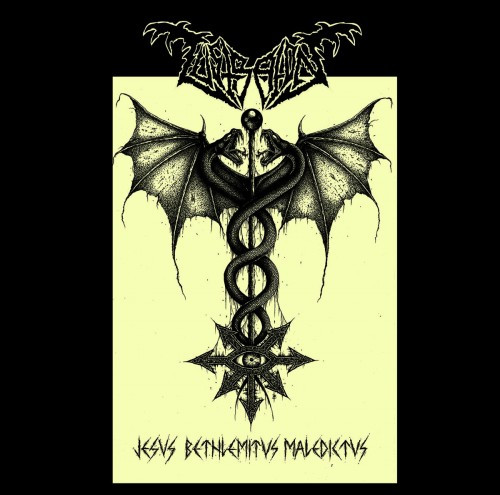 Lustration are based in Brisbane, Australia. Their second full-length, Jesus Bethlemitus Maledictus, is due for release on December 25 by the French label Forgotten Wisdom Productions. Three songs are now available for streaming on Bandcamp, and they’ve seized my neck in an iron grip of black/death/thrash.

This is the kind of music for which words like “murky” and “grimy” were invented. The highly distorted riffs often sound like a cement mixer at work; the bass tone resembles a car-crusher operating at a junkyard; the monstrous vocals echo so much that the words run into each other coming and going.

But all is not murky: The drums crackle like gunshots and the cymbals ring out like glass shattering; the pulsating bass notes that surface in the title track become a memorable force in the song; and the vibrating tremolo lead in “Fading Lights of Atlantis” is intense and memorable.

Lustration also do a nice job switching gears between thrashing terror and putrescent doom crawls. The tolling of bells, methodical skull-cleaving drum beats, and a strange reverberating horn-like sound at the end of “Fading Lights” seem like a great album-closer — though there’s actually one more track that comes after it. I’d like to hear what that sounds like — as well as the rest of this album. 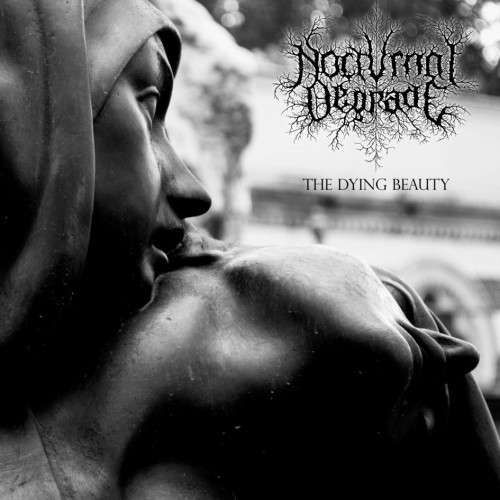 Near the end of November the Mexico City label Self Mutilation Services released the third album, entitled The Dying Beauty, by the Italian band Nocturnal Degrade, which is the solo project of Manuel Mazzenga (aka “Cold“). I hadn’t been exposed to this band’s music before listening to The Dying Beauty, so I don’t know how it compares to the previous releases. Considered on its own, I found it both mesmerizing and pulse-pounding.

The emotional aura of the music is on the depressive end of the spectrum, conveying a wrenching sense of despair when the music is racing and stricken melancholy when the conflagration burns out to embers. But there is considerable beauty lurking within this album, as well as stylistic variety (including elements of post-rock and shoe gaze):

Chiming guitars cast spells after the fire-storms that begin “In December” and “Iceberg of Memories”. Sombre ambient tones and a slow extended guitar motif turn “Of My Soul and the Macrocosm” into a mystical dirge, washed with tears of blood. The ambient-keyboard and piano instrumental “Celeste (Pale Blue Tears)” shimmers like an iceberg beneath a pale northern sun. And there are more twists and turns in the album as well.

Cold’s vocals are ugly and strangled, like the scraping of barbed wire across sheet metal, but his music is moving and hypnotic.