(We present this guest review of a fine album by Allen Griffin, who makes his first appearance at our site.)

Dedicated fans of Extreme Metal often suffer from an embarrassment of riches when it comes to finding bands who can competently produce the sounds they yearn for. What these same fans often lack are acts that can provide a sense of surprise and excitement, a feeling we might not have felt since the early days of diving headlong into the genre.

This is what makes Lychgate’s second full-length, An Antidote for Glass Pills, such a startling discovery. This group consists of Vortigern, also of The One (vocals), G.A. Chandler, also of U.K. group Esoteric (vocals), T.J.F.Vallely of Macabre Omen (drums and percussion), S.D. Lindsley (guitar), A.K. Webb (bass), K.J. Bowyer (organ), and F.A. Young (piano). Obviously, with some members being involved with other well-known projects (at least in underground circles), there is some indication this is a side-project, which would be a shame as this group seems to be at least the equal of just about any band out there. 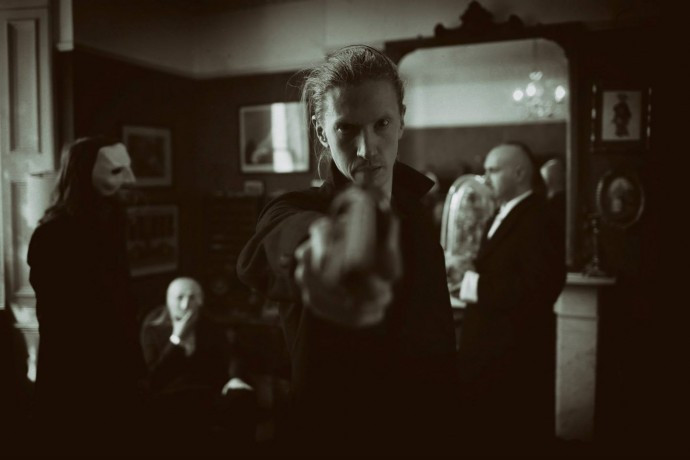 The album begins with a short introduction titled “Unto My Tempest”. The listener is immediately confronted with the prominence of Bowyer’s organ, which remains high in the mix throughout the entire album. But the instrument adds an immense gravity to the group’s overall sound. Never before has the instrument seemed to blend as effectively with the guitar and bass, the sum total of the instruments coming across as incredibly heavy.

“Davamesque B2” is the first proper track and kicks off with an oddly-timed riff before segueing into an epic doom section. Once again, Lychgate illustrate their uniqueness through the use of odd-time signatures. Vallely’s drum patterns are often quite busy, and always surprising. He would constitute a primary focus in a group that didn’t have so many other elements vying for attention. By the end of the track, Lychgate have proven to be such an unusual commodity there is no pressing “Stop” until the album’s journey is complete, if for no other reason than to see what comes next.

What little press seems to exist on the group tries to push them into the Doom category. And while that is certainly an important element of their sound, they often employ copious amounts of blast beats, particularly on “I Am Contempt”, which gives them a Black Metal feel as well. Guitarist S.D. Lindsley plays each style equally well, often shifting from Doom to Black Metal tremolo picking and following it up with serpentine progressive passages, before shifting into Deathspell Omega-esque arpeggios. Once again, another instrument is providing the listener with much content to digest.

The album continues on like this, each track adding another layer of experimentation and intrigue to an already colossal package. “Letter XIX” shows the band nailing a most unusual cadence to dramatic effect, an almost djent rhythm, if that wouldn’t be selling it far too short. “The Illness Named Imagination” sees the organ tap into a vein of Arcturus-inspired sounds, but only for a moment. “My Fate to Burn Forever” ends with softer organ work, while album closer “The Pinnacle Known to Sisyphus” sees Lychgate channeling a mix of Ulver and Candlemass, but set to the pulse of the progressive and challenging drum work of Vallely. Clean vocals take the lead role here, and once again it is the organ that pulls the piece to its resolution.

To say much more would probably belabor the point, particularly on an album already difficult to describe with words. Lychgate not only play a very challenging form of Metal, but succeed in giving the listener the visceral satisfaction of the most straightforward acts while adding obscene amounts of cerebral stimulation, inspired by the most avant-garde sources, Metal or otherwise. Anyone feeling they have heard all that Extreme Metal has to offer would do well to seek this album out, which is available digitally from Blood Music on Bandcamp on a donation basis, and as a 2-LP record.

One Response to “LYCHGATE: “AN ANTIDOTE FOR THE GLASS PILL””