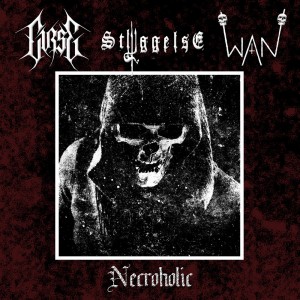 On December 27, the Russian label Satanath Records, along with Black Plague Records (USA) and The True Plague (USA), will release a three-way black metal split entitled Necroholic. — and one song from each band can now be heard on Satanath’s Bandcamp page for the split. All three are really strong. 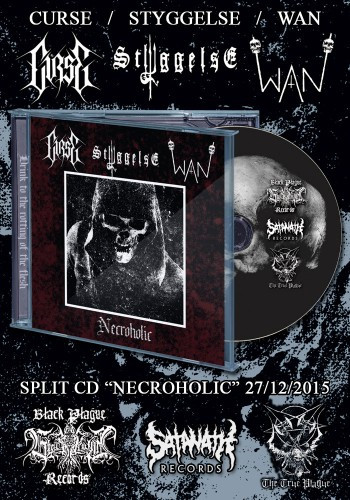 The first band, Curse, has been around since the late ’90s. They were originally from Iceland, but are now based in Oslo, Norway, and they’ve released three albums, the last of those back in 2011.

The Curse song, “War of One“, is a rocking rampage with a bleak but catchy lead melody, head-hammering rhythms, a juicy solo, and a raw-throated vocalist who sounds like a cross between Lemmy and Rob the Baron. Hell of a song!

The second band on the split is a band from Gothenburg, Sweden, named Styggelse, and they’ve released two albums to date. Their track, “No Team In I“, explodes in a blasting, hell-ripping assault and then switches to a murderously infectious rocking riff coupled with a berserker guitar solo before resuming the savage task of trying to tear your head off.

The last band on the split is Sweden’s WAN, who also have two albums to their credit. “På Korset Vi Kräks” is a dynamic song that includes a bit of crust punk, some determined slashing and burning, and a doomy crawl, all in the space of 2 1/2 minutes. With horrifically pestilential vocals, and a ton of grinding low-end power, this is a very cool track.

You can listen to all three songs using the Bandcamp player below, and if you want to hear excerpts from other music on the split, check out the YouTube clip. I’m really looking forward to hearing the entire split. 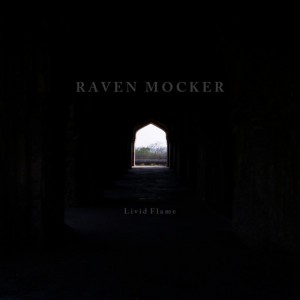 Time to slow down again.

I discovered this next EP through the premiere of a stream at CVLT Nation. It’s a two-song EP named Livid Flame by an enigma named Raven Mocker. I say “enigma”, because I’ve found nothing to indicate who is in this band or even what country they’re from. I’m very curious, because Livid Flame turns out to be a brilliant surprise — one of the best funeral doom releases I’ve heard all year and a close rival in my affections to the magnificent 2015 full-lengths by Skepticism and Bell Witch.

I probably could have listened to a full 10 minutes of the somber church-organ melody that begins “Livid Flame I“, but what comes after is just as moving. The glacially paced riffs, titanic drum beats, and cavernous roars are simply staggering, and the song’s tear-soaked melodies are as beautiful as they are wretched. The physical and emotional power of the song can’t be overstated. At the moment, I would like to be buried with it.

I was so enamored with the first track that I feared a letdown in coming to “Livid Flame II“. I needn’t have worried. No organ this time — instead, an immediate descent into a vast sinkhole of black despair. The riffs and drum blasts are again cataclysmically crushing, the vocals are even more monstrously harrowing, and this time the melodies are so dire, dismal, and grief-stricken that it’s hard to think of them as beautiful. Yet they are stupefyingly powerful.

Livid Flame is being released by Atrum Cultus on tape ($5 plus shipping), and with the tape you also get a digital download of the EP. I know, because I eagerly bought it about 10 seconds after listening to the EP the first time.

UPDATE: Raven Mocker has now put this EP on Bandcamp as a digital download HERE. 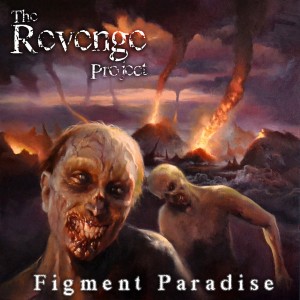 Now it’s time to speed up again before your blood completely congeals, with some music from the final band featured in this two-part post. The Revenge Project come from Burgas, Bulgaria, and they’ve released four albums since coming together in 2000. Their fourth album, Figment Paradise, was released in mid-October via Bandcamp.

I’ve only managed to listen to the first two songs from the album, but am once again writing now for fear that I may never get around to reviewing it, given everything else happening with the blog this time of year.

Both of these songs — “Redeemers and Believers” and “The End of Days” — are electrifying jolts of death metal ferocity made by people who’ve obviously been doing this for a long time, with the first song more atmospheric and the second one more viscerally thrashing.

Apart from riffs that will seize you by the back of the neck, what really made the songs stand out to me were the infectious melodies, both sinuous and pulsing, mesmerizing and head-nodding, that the band succeeded in integrating into these head-smashers. And holy shit, there are some guitar solos in both songs that make them worth hearing all by themselves. Really looking forward to hearing the rest of the songs.