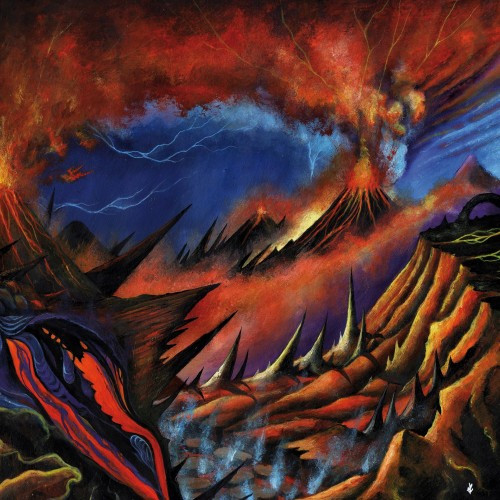 I vividly remember the first time, as a child, that I saw Disney’s Fantasia. The whole movie was wondrous, but the segment that made the biggest impact on my barely formed mind was the visual pageant of the earth’s beginnings and the growth of life, from the planet’s formation to the end of the dinosaurs, set to the music of Stravinsky’s Rite of Spring. Those memories came back to me when I first heard the song we’re about to premiere (“Creation of A Planet“) from the new album Pangaea by Ecferus, and not solely because of the music.

As you can see, the album is adorned with brilliant cover art, created by Romanian artist Luciana Nedelea. With striking colors and bold strokes, she captures the sense of a violent, primeval time, with the earth in upheaval. The artwork is a match for the imaginative concept underlying the album as a whole, as described in this statement from I, Voidhanger Records, who will be releasing it on February 6, 2016:

“Pangaea uses a mythological point-of-view to tell the story of a planet at war with its occupants. The tortured main character, Pangaea, is ripped apart into separate continents by Earth so as to prevent the begetting of creatures with potential too powerful to be trusted. Acting out of spite, Pangaea nurtures humanity’s rise to power until their passive occupation mutates into indefensible planetary malice. Using wide dynamic shifts and changes in meter, with Pangaea Ecferus creates the musical equivalent of an accelerated planetary evolution, depicting the fury of the elements and an Earth painfully coming to life.”

Those familiar with the previous releases of Ecferus (the solo work of a prolific artist from Indiana who calls himself Alp) will remember the band’s interest in musically exploring narratives of human struggle in prehistorical times, through the aesthetics of black metal, and this new album continues to reflect its creator’s interest in evolutionary anthropology, mythology, and science.

“Creation of A Planet” is the first full chapter in the Pangaea story following a prelude. It has the panoramic sweep and dramatic power of Rite of Spring at the crescendo of that piece, but this song is not a slow build. From the beginning, it hurtles forward, with a high trilling guitar melody piercing long waves of ambient melody and the rumble of hammering percussion. The vocals are savagely inflamed, amplifying the sense of violent tumult in the music.

Over the course of the long song, the pace slows as gloom-shrouded, sludgy chords, rumbling bass notes, and writhing dissonant arpeggios paint mental pictures of encroaching doom. The pace quickens again, the intensity surging in a frenzy of guitar notes, deranged shrieking, and heaving symphonic melody as this song reaches its own explosive crescendo.

There’s a narrative quality in this music, one you would notice even if you didn’t know anything about the lyrical concept, and it’s high-octane fuel for the imagination. This is definitely an album worth waiting for… there is much more of the story to come.

2 Responses to “AN NCS PREMIERE: ECFERUS — “CREATION OF A PLANET””