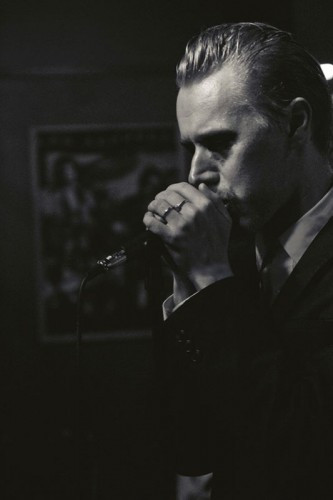 (Comrade Aleks introduces us to the Finnish doom band Church of Void through this interview with the group’s vocalist Magus Corvus.)

Last week our patient readers could find an interview with the British doom metal outfit Iron Void on the virtual pages of NCS, and I suppose that it’s right and logical to continue our exploration of doom depths with the Finnish outfit Church of Void.

This band has only one full-length album, Dead Rising, which was released by Svart Records in 2013. It’s a good start for Church – attractive melodies, good riffs and catchy vocal lines… I like it, and I hope that you’ll like it too… But there have been no bells ringing in Church of Void for some time – a split with Lowburn in 2014, a digital single of a Pentagram cover this year… that’s all. So it’s time to find someone who can tell what’s going on there — and that someone is the band’s vocalist Magus Corvus.

Hail Magus! How are you? Haven’t heard anything about Church of Void for some time, what’s the band’s status?

Greetings Aleks! I´m just fine, waiting for the winter to take over my country. Here in our hometown it´s somewhat dark and very little snow, actually the darkest time of the year. So our mood can be a little bit depressive, at least for some of us in the band, including me.

I guess you could say we´ve been hibernating for the past two months. After the UK shows we decided to take a deep breath. Our drummer Byron is studying to become a professional musician, and I´ve been involved with theater. So those things keep us occupied. Each of us is more or less writing material, and as soon as we get together, we´ll find out what kind of material we´ll make out of it. So Church of Void as an entity is alive and well, it just sleeps.

Wow! What do you do in theatre man?! And you’re not alone – the same shitty winter has come to Saint-Petersburg.

I do acting. I´ve been doing it as long as I have been making music. It´s a different way to express yourself but nonetheless interesting. I hadn´t done that for four years, but I was asked by a friend and it was an offer I could not refuse. 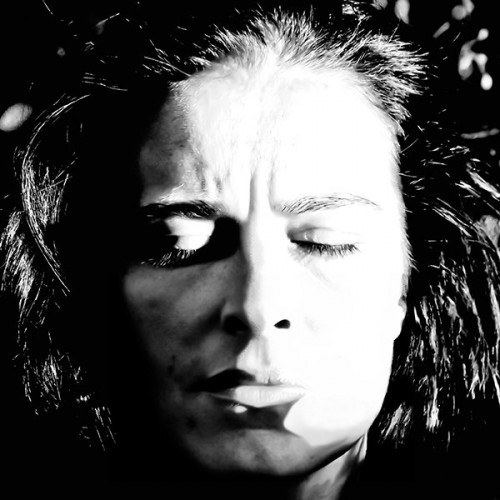 Your first and only full-length Dead Rising was released in 2013, and you’ve already explained some things… but wouldn’t this be a good time to tell about your plans for the next release?

Our next release, as some of you might know by now, is Coalition of the Anathematized, a three-way split album with Sweden´s Acolytes of Moros (check them out if you haven´t!) and our fellow Finns and friends Cardinals Folly.

We recorded the tracks last Easter, and the whole thing has been delayed because of the financial issues. But now things are evolving and the artwork for the album is in progress. Five tracks in total, approx. 40 minutes.

How many of your songs will be included in this split-album?

We have two songs coming into that album; “Moonstone” and “Night´s Watch”. Both of those songs have been played at our most recent gigs and the feedback has been positive. As far as I´m concerned “Moonstone” has one of the best solos A.D. has delivered, an absolute classic! We also get Byron to sing a bit of his shamanic chanting.

Acolytes of Moros contribute with one epic 15-minute track, “The World Belongs to Demons”, and Cardinals Folly have two in-your-face fast juggernauts, “Hyberborean” and “A Slave of Karnstein”. Depending on the label, I hope it will be released soon, early 2016.

Church of Void – Son of a Witch

Dead Rising shows interesting variations on traditional doom metal music with stoner, but it has some specific approaches as in hard rock music. What were your main influences and ideas you wanted to fulfill in Church of Void?

Personally, I draw inspiration from three bands in doom metal: Saint Vitus, Pentagram, and Reverend Bizarre. But even before that, the first band I played in was hardcore punk, because of my inability to play properly. So I replaced technical skills with sheer energy and rage. Because of that, I´m still very simple-minded musically.

On the other hand, we have very skilled musicians in this band who can play parts I´m not able to, which broadens our scale a lot. Five profilic writers, with various musical backgrounds, from black, death, and progressive metal, as well as punk. And we all share the mutual love for ’70s hard rock, more or less. So Dead Rising showed all the various influences we have. Actually, I like when bands broaden their repertoire. Led Zeppelin did everything from blues to folk and is now regarded as the predecessors of heavy metal. As did Black Sabbath. And Uriah Heep. The list goes on and on. 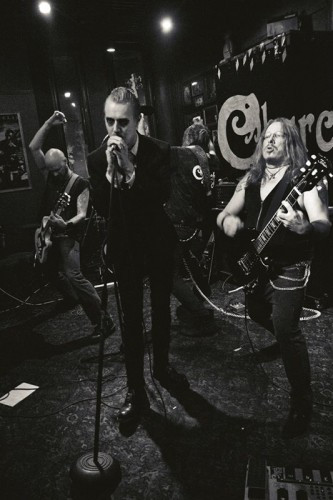 When I checked Metal-Archives I found that only Georgios Funeral and Byron Vortex played before Church of Void in other bands. Did you have any musical experience before you started the band?

People do know this, but I had played with Byron in a band before Church of Void. This nameless backing group included our original bass player Grimmo as well, so in some ways that was the very first step of Church of Void. I did not, however, sing in that band but played guitar. Now that I think of it, it´s funny that Byron and Grimmo never got the chance to play in CoV at the SAME time… I had been playing in a punk band with H. Warlock, and as Grimmo left, I asked him to take over the bass. A.D. had a one-man metal band, before CoV.

By the way, how did it happen that you all gathered together?

When I got to know Georgios better I asked him to form a doom metal band with me. So he turned up for the first rehearsals, which was just him and me, with two or three demos. They were very much “Peaceville-Three”-influenced, you know, My Dying Bride and such, so I turned them down immediately! I said I want to make simple but powerful music with energy, in a way Saint Vitus did in the ´80s. So the first song we rehearsed was “The Hour is Getting Late” and many others followed, which did not see the light of day when we started the five-piece line-up. As our line-up became complete, things began to evolve into new direction and I think it´s still evolving. 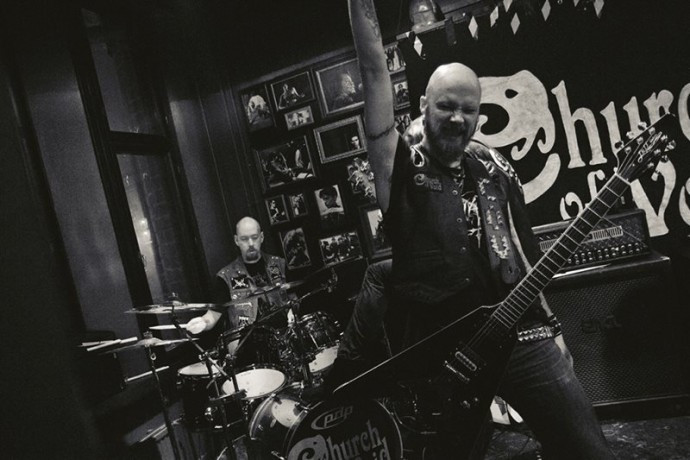 How do you see Church of Void’s perspective, considering this evolution?

Our music is constantly changing. As you know, we don´t just stick with one specific way to express this band. If we want to make a slow 10-minute track, we´ll make it. If we want a fast doom rock song, we´ll make it. I hope some day we´ll find coherency and stop being compared to others, that we’ll sound like nothing but Church of Void. I think it´s inevitable.

Can you tell a story of your favorite song or songs from Dead Rising? How did you write the lyrics? How did you record it?

Since it includes songs by all of us, I think everyone has their own favorites.. But I can tell you that when we first rehearsed “Winter is Coming” years ago in our rehearsal space, I remember the feeling of sheer delight and awe. I guess that turned out to be sort of an anthem for us and introduced our music to people, since it was the first song on our first EP… so we felt that it should deserve a new treatment on the LP. A bit of new arrangements here and there. All of us wrote lyrics, and although songs are credited to the whole band, people don´t always realize that. And it´s nice to see how different the writers we are.

We recorded the album with Thomas Pyre, the guy who did the EP with us as well. And since Svart Records gave us a decent budget, we were able to spend more time in Thomas´ studio than before… I have nothing but good memories from it, although I hate to sing in the studio. I´m not much of a singer, as much as I am a performer. I guess my love for theatrics shows in our live appearances.

It’s said that all the band’s members are from Jyväskylä, a city placed right in the middle of the “thousand lakes”. Do you feel that your surroundings influence you when you write songs for Church of Void?

As far as I´m concerned, Nature is a great inspiration for us. And the Human Nature as well. You can find lots of both here.

You recorded Pentagram’s song “Forever My Queen” as a single in July 2015, and it only had a digital release. What was the reason for doing so?

We recorded it in the same session as the songs for Coalition…, and it was just done with the spare time we had. We decided to release it as a free digital single, just to thank all the people who have been following our career. So it´s a “Thank You” of some kind. We´ve played that track live every now and then, and it was done live in the studio. 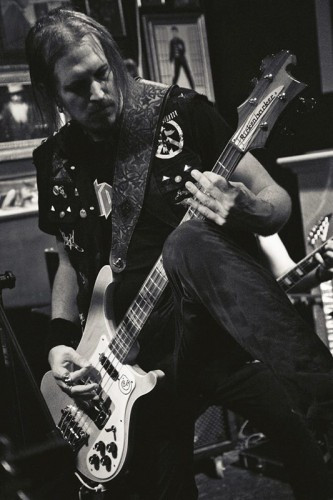 Magus, you had a five-day long tour in the UK, how did you survive it?

Five days in the mighty UK. Well…. you can imagine what it´s like… lots of travelling and bad jokes. I wouldn´t trade that time for anything else, mind you. Strange things happen when you turn yourself into touring-mood. The everyday-life you lead goes behind. You meet fascinating new people you would not meet otherwise, you see new places. It binds us together as a band.

Did you play abroad before that?

No, these were the first shows abroad. If things go down well, we might do some more next spring.

With what kind of bands did you play there? Did you have a constant support?

We had two bands travelling with us, Tor Marrock, a Welsh doom metal band, and Dark Legacy from Sweden. Also, we shared the bill with UK´s Archelon in Manchester. 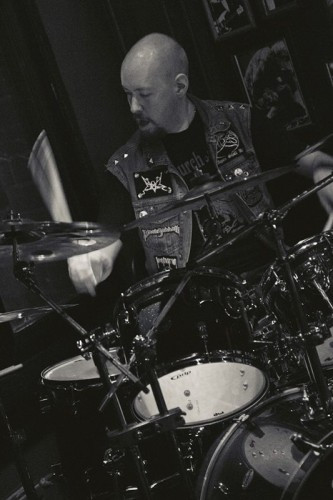 What are your most strong impressions from this tour?

People we met. Music connects people in ways that very few things can. Also, the performances we gave were among the best we have done.

What are your plans concerning tours and gigs in the near future?

I have been talking to other bands on the split album, and all of us agree that it would be a great pleasure for us to support the album by doing live shows together. We´ve played live with both of those bands, and I can sincerely say that those men have become our dear friends. So it also would be a great opportunity to get us all together again. I´m really looking forward to that, a lot.

How do you see the role of doom metal in modern culture?

It´s a great way to reflect the macrocosmos as well as your inner world. But people have not changed through the years, we just happen to have amplifiers.

Thanks for the interview Magus! That’s all… So what about a few more words for our readers?

Thank you to those of you who read this. We´re genuinely delighted when people show their sincere interest towards our music. It gives us strength. Like Kimi Kärki of Reverend Bizarre says, “Music Is The Bridge Between Worlds”.

3 Responses to “AN NCS INTERVIEW: CHURCH OF VOID (MAGUS CORVUS)”