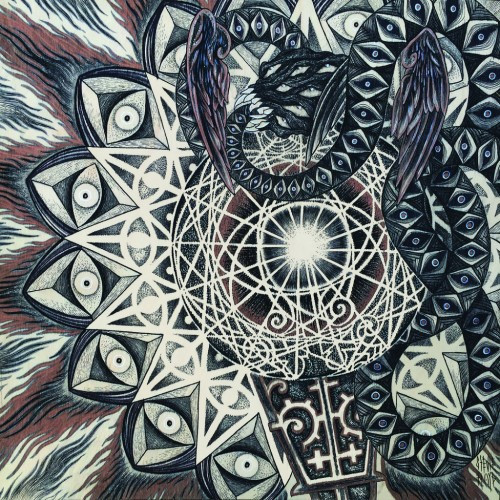 Welcome to the 9th Part of our evolving list of 2015’s Most Infectious Extreme Metal Songs. To listen to the other songs that have preceded the two I’m adding today, go here.

As we forge brazenly ahead into the first month of the new year, we still have two year-end 2015 series in progress. Earlier today I posted one of our year-end lists, actually a combination of lists, prepared by the members of Amiensus.

I’ve been posting those lists in the order received, and it happens that today, in that order, was the day for the ones from Amiensus. And in that list, the band’s vocalist James Benson named “Will Wish and Desire” as his top metal song of the year.

Today is also the day I had calendared for the two songs in this post, one of which is the same damned song. This is an episode of serendipity or synchronicity, and when days like this happen, I’m never sure which word is the best one. I think they’re both relevant.

I first heard this song way before the album in which it appears was released — and way before any official premiere of any finished song on the album. Abigail Williams’ principal creative force Ken Sorceron shared it with me, and I shared it with you here.

But at the same time I also got the opportunity to share a second song from The Accuser  — “Forever Kingdom of Dirt”. And I’ve had a hellish time deciding which of those two songs to put on this list.

There was never any doubt in my mind that one of them belonged here. And when I heard the rest of the album, the choice became even more challenging, because The Accuser is home to many of the candidates I wrestled with. In my opinion, that album is also the best one Abigail Williams has released to date.

The only reason there’s only one song from the album on this list is because of the artificial constraint I imposed on myself when I started this series seven years ago — one song per album. And after much wrestling, this is the one. It hits you where you live.

Everyone has their own musical sensibilities, the kind of turns of mind that make you feel, “this song sounds just right when it comes after this one”. Truth be told, there are a number of other songs that I think would sound like a matched pair after “Will, Wish and Desire”. But in the labyrinthine twisting of my own neurons, I found that Grift’s “Svältorna” made an especially good companion.

When you’re acting as your own DJ, you look for the transitions that work for yourself. And in this case, the transition brings contrast, but also kinship.

The beautiful film for this song was made by Daniel Blomberg and Grift’s Erik Gärdefors near a small mountain named Kinnekulle in the southwestern Swedish province of Västergötland, and it features Gärdefors‘ father, whose face alone tells a thousand stories.

A union of the harsh and the mystical, the earth-bound and the ephemeral, “Svältorna” is a very memorable song. It pulls hard on the heart-strings, just as the last song does. As I wrote soon after I first saw and heard it, I could watch this and listen to it all day… still. The entire album — Syner — is equally powerful.