On this second album, it is now apparent the long shadow that Finnish funeral doom masters Thergothon cast over Lycus. It would be surprising if Lycus were unfamiliar with Thergothon’s sole full-length, Stream from the Heavens; the sorrowful, lumbering rhythms and walls of sustained guitars are here in great abundance. But this isn’t merely idol worship on the part of Lycus. They are certainly adept enough not only to modernize the sound but also to add elements in order to make it their own. 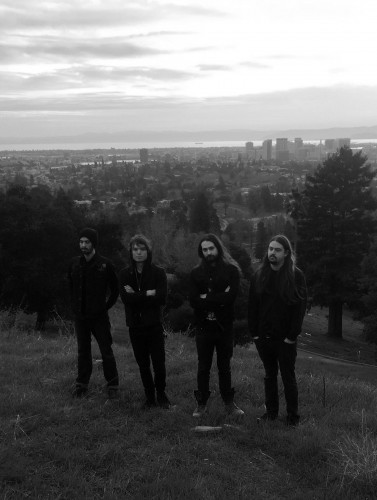 Album opener “Solar Chamber”, as well as the third track “Mirage”, both utilize blast beats at times, which are very Black Metal in their execution. Elsewhere, such as on the title track, they speed things up just a bit, allowing a Post-Punk or Gothic influence to shine through, at times almost sounding a bit like My Bloody Valentine or even early The Cure. Also, the drums often slide into Neurosis-style tom workouts, adding another dynamic entirely to their sound. In fact, the album kicks off with just this type of approach before giving way to the weight of their full-on Doom assault.

Most notably, every song at some point utilizes cello accompaniment as well, effectively boosting the sense of atmosphere. This seems to occur almost anytime the guitars began to utilize cleaner tones. This additional instrument gives these sections an emotional weight that allows them to share equal importance with the heavier sections. The dynamic is fascinating and will hopefully continue on their other releases as well.

With three of the four tracks clocking in at over ten minutes apiece, Chasms certainly makes for an epic listen. Each track works on its own, memorable despite the duration, but taken as a whole, this album is monolithic. And that’s just how it should be. This is the soundtrack perfect for wandering through the lost, cyclopean cities of H.P. Lovecraft’s fiction. With Lycus known for staying fairly busy on the live front as well, one can certainly imagine becoming lost within their vast compositions.

While firmly falling in the Funeral Doom category, Lycus display the kind of maturity and artistry which shows they are not one to be lost among the crowd. At the rate they are progressing, they will quickly find themselves at the forefront of the genre.

Chasms features the cover art of Paolo Girardi and will be released by Relapse on January 15.