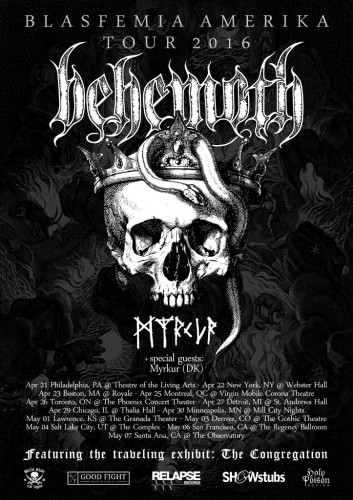 This should be interesting — a North American tour headlined by Behemoth with support from Myrkur, and a traveling exhibition featuring the creations of Sharon Toxic. Behemoth has never failed to disappoint in the 3 (or 4?) times I’ve seen them. It’s always powerful entertainment. And I confess I’m curious to see Myrkur live. It’s a moot point for me, however, since the tour won’t reach the Pacific Northwest, but maybe it will land in your vicinity.

Because I’m in a bit of a hurry, I’m going to excerpt a few passages from the press release we received, followed by a list of all the dates:

“Polish death/black metal outfit, BEHEMOTH, has announced their return to North America this Spring with a special tour, featuring support from Myrkur. With plans to play their latest album, The Satanist, in its entirety, the journey – which runs from April 21st through May 7th – is one not to be missed!

“In addition to the concert, fans will also have the chance to view “The Congregation” exhibition at each venue. Dubbed, “a symbiosis of BEHEMOTH and Toxic Vision,” the display showcases the collaboration between the two parties. Over the years, the artist behind Toxic Vision (Sharon Toxic) has worked closely with the band to create their stage outfits, music videos, stage/photo props and more. “The Congregation” is a new experience and built solely for this tour.”