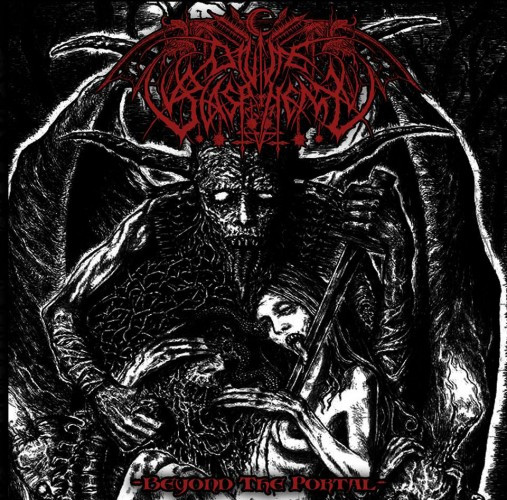 Some weekends are a whirlwind, a flurry of unexpected events hitting from all points of the compass. Others are a soporific quagmire of sloth and malaise. Somehow, for me this weekend was an odd combination of the two. I rejoice that I’m still alive.

I also rejoice in the music I heard. And I heard so much good metal that I’m going to share it in two posts, the first of which is this one, which combines three album reviews. The music collected in this two-parter is mainly, but not entirely, black metal, so I’m taking slight liberties to anoint the two posts with the Shades of Black banner. Part Two will appear today or tomorrow.

Divine Blasphemy carry on the rich tradition of Greek black metal with their debut album Beyond the Portal. I heard the first song, and I felt elevated. “Where did these people come from?”, I wondered. And then I heard the rest of the album and realized that the first song was not a fluke. This is a wonderful ride on a red-eyed black steed — it tries to buck you off, but you hang on because the chaos is so exhilarating.

Beyond the Portal is loaded to the brim with magnetic riffs that alternately lash like an ice storm and rock the hell out. The melodies are highly infectious, the rhythms are thundering, the swooping solos are searing, and the vocals are savage.

On top of all those great qualities, the production is sharp, the mix is well-balanced, and the songs are well-written and dynamic: While the band spend most of their time ripping, tearing, and galloping, they astutely back off their rampaging pace at selected moments, generating an atmosphere of ominous gloom and dread or simply hypnotizing the listener with a rumbling bass or an echoing guitar.

You’ll get your money’s worth on this album, because they’re aren’t any weak links among the songs. More than once I’ve picked out a single track at random and wound up letting the whole thing just continue streaming.

Beyond the Portal was released on November 27, 2015, by Silesian Stronghold Records. It features guest vocals by Gothmog (Soulskinner, Thou Art Lord) on the second and fifth tracks.

On Christmas Day of 2014, our Norwegian friend eiterorm included a demo by an Icelandic black metal band named Naðra in a guest feature on our site collecting 2014 releases we had overlooked. I later learned that Naðra’s line-up includes members of other notable Icelandic bands, including Carpe Noctem, Ophidian I, and Misþyrming (in fact, three of Naðra’s members appear to be in Misþyrming).

Last fall I learned that Fallen Empire Records planned to release the band’s debut album this month. Entitled Allir vegir til glötunar, it includes five tracks, one of which (“Sár”) I wrote about when it became available for streaming on Bandcamp last September. Today, Fallen Empire made this announcement on Facebook:

“An unofficial version of the NAÐRA – ALLIR VEGIR TIL GLÖTUNAR album has been leaked online, so the band has decided to release the official stream / download on their Bandcamp today as a name your price offering. Support the band and their incredible debut album by directing your attention here. CD/CS/LP will be out in the coming months.”

It’s unfortunate that some asshole forced the band’s hand, but the sliver lining to that cloud is in our accelerated access to the music, because the album is completely scintillating.

It erupts from the gate with “Fjallið”, a seething storm of ripping riffs, thundering drums, and throat-tearing yells and screams (throughout the album, the vocalist turns himself inside out, holding nothing back). “Sál” briefly slows the pace with an anguished but emotionally affecting melody before launching into a grim gallop.

The middle track of the five, “Falið”, breaks the 14-minute mark, combining hot-blooded ferocity, sweeping atmospheric parts, and dirge-like passages of bitter, depressive doom. That’s followed by the song that appeared last September — “Sár” — a blood-quickening rampage with an almost heroic atmosphere that gives you no chance to catch your breath until the final minute.

To conclude the album, Naðra bring us “Fallið”. It’s another longer-than-average track, marked by soaring choral voices to go along with the skin-flaying torrent of the main vocals and moving between cyclones of scything, warlike black metal, tranquil acoustic instrumental passages, and a concluding passage of tragic but epic pageantry. It’s my personal favorite among these five very strong pieces.

In a nutshell, this is a riveting, dynamic album that deftly incorporates genre styles beyond black metal. Unremittingly powerful and emotionally wrenching, it has quickly become a highlight of this new year.

The album will be released by Vánagandr, Fallen Empire, and Signal Rex on cassette, vinyl and CD respectively. The cover was engraved in copper and printed by an artist named Skaðvaldur. 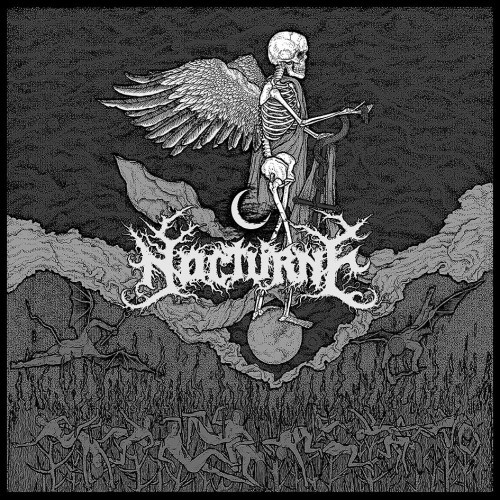 Nocturne come our way from Austria, and only a few days ago they released their debut self-titled album via the French label Unlight Productions.

Like the first two albums reviewed above, Nocturne is very strong from beginning to end. Magnified by a clear, powerful production, the music integrates elements of depressive black metal, death metal, folk metal, and even doom in a way that will catch you up and carry you away.

The songs are dramatic and often stately, with massed clean voices rising up here and there (as well as a variety of effective keyboard additions) to enhance the music’s majestic qualities. But while Nocturne have created an array of grand, melancholy, and sometimes folk-tinged melodies that pull at the heart strings, they’re also very good at getting your blood racing with warlike charges, barbarous frenzies, and whirling dances — and the main vocals (which are quite dynamic) burn with the passion of an enraged beast.

While the band’s lyrics deal with such occult subjects as the Left Hand Path, with “links to Chaosgnosticism, Setianism as well as dark mesopotamian heritage,” the music is reminiscent (at least to me) of certain strains of Northern European pagan metal (or “Viking metal”). Though often grim and grief-stricken, it also often has a heroic, triumphant air. A beautifully crafted album that proves to be quite moving and memorable.

P.S. If you’re in a hurry and want an idea of the disparate musical styles and moods that Nocturne have put into this work, listen to the riveting instrumental title track followed by “Ama Lilith” and “He Before Whom the Sky Shakes”.