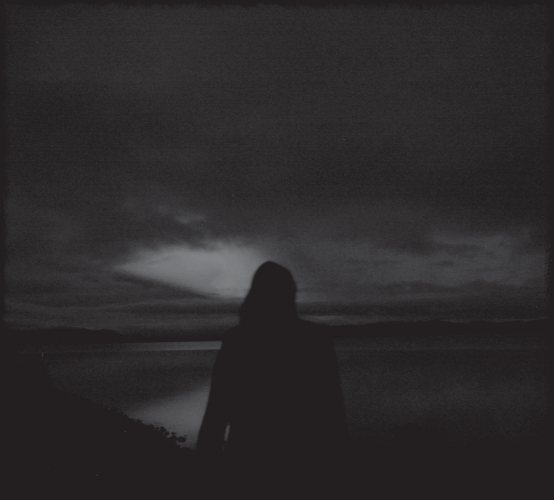 Almyrkvi ­is the name of a new Icelandic black metal project — the solo work of musician Garðar S Jónsson, who is also a member of the great Icelandic band Sinmara. The debut EP of this new project is entitled Pupil Of The Searing Maelstrom and it will be released in February on CD and 12″ vinyl by Ván Records. Today we bring you the premiere of a song from the EP named “Shrouded In Blinding Light“.

Despite its relatively small population, Iceland is already home to many excellent black metal bands, and this song proves that we must now add one more to that already impressive list. In Icelandic, “Almyrkvi” refers to a solar eclipse, but can also be understood as referring to utter darkness.  The title of “Shrouded In Blinding Light” might seem to foreshadow a divergence from the concept embodied in Almyrkvi’s name, and it is indeed a multi-textured song, one that seems to hint at shining alien vistas lying in wait beyond the crushing darkness of a black hole.

The song is massively heavy, anchored by huge drumbeats and staggering riffs, yet the music also has a spectral aura, with the eerie shimmer of ambient tones swirling around both the pavement-cracking weight in the low end and the savagery of Jónsson’s harsh growls. As the song unfolds, the pace accelerates, driven by a compulsive drum rhythm and raking riffs, but the otherworldly atmosphere of the song remains, even as a sweeping melody unfolds like a cosmic panorama. It’s as if black metal has been taken to the stars, and through a wormhole to a place both terrible and beautiful

Pupil of the Searing Maelstrom includes 26 minutes of music. It was recorded, mixed, and mastered by S. Lockhart at Studio Emissary and will feature cover artwork by J. Deegan. For further release information as it becomes available, watch these spaces:

In addition, Almyrkvi is scheduled to perform at the Oration MMXVI festival in Reykjavík on February 19-20 alongside some of our favorite bands, including Svartidauði, Malthusian, Sinmara, and Misþyrming. For more info about the festival, go HERE.

10 Responses to “AN NCS PREMIERE: ALMYRKVI — “SHROUDED IN BLINDING LIGHT””