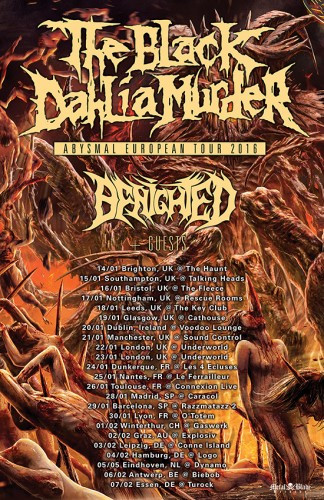 So this review goes out to Gary and Julien for getting me off my ass and out to the show. Much appreciated guys!

Though I arrived at the venue about halfway through the opening band’s set, their plodding chugathon didn’t exactly inspire much enthusiasm, so I opted instead to hang-out by the merch table with Gary and some of the Benighted crew, swapping stories and metal gossip as you do.

Of course, soon enough it was time for the Frenchmen to hit the stage themselves… and boy, did they hit it hard!

With this being their first time in Nottingham (and, if I’m not mistaken, only their second ever visit to the UK as a band) the French fivesome wasted absolutely no time in getting down to the dirty business of delivering their brutal, skin-stripping brand of Death Metal at maximum volume and maximum intensity, kicking off with a flurry of songs from their most recent opus Carnivore Sublime and its predecessor Asylum Cave.

A certain friend of mine once said, “I’m not always that into Deathcore, but these guys ride the line between Deathcore, Death Metal, and Grindcore almost perfectly”, and I’d probably agree with him on that. Despite their almost overwhelming brutality, practically every song has its own particular hook and identity, and the group are never ones to skimp on delivering some massive metallic riffage whenever they can.

Granted, there’s the occasional tacked-on breakdown that sticks out like the proverbial sore thumb (the one in the middle of the otherwise killer “Slut” in particular threatens to derail the song entirely) and there are times when the blinding intensity of their music almost transforms into sheer white noise, but once you’ve experienced the hair-raising vocals of frontman Julien Truchan and the utterly berserk drum work of Kevin Foley (whose imminent departure will leave some very big shoes to fill) in person, you’ll understand how it’s impossible not to be blown away by the raving, primal ferocity and crushing, almost physical, force these guys put out.

You can get a small taste of what to expect below with the live footage I managed to capture of the band’s second song of the night, the ravenous “Experience Your Flesh”.

I’ve seen headliners The Black Dahlia Murder live now almost more times than I can count (and I can count all the way into double figures!) but they’ve never once disappointed, and tonight would be no exception in that regard (even though, on a personal level, I wasn’t as enamoured with the band’s chosen setlist this time around).

Obviously, quite a bit of the set focussed on showcasing material drawn from their newest album, Abysmal, though this was mainly loaded in the first half, with the title track and “Vlad, Son of the Dragon” in particular garnering an appropriately rabid reaction. What was more unexpected, however, was just how much of the set was given over to tracks from Unhallowed and Miasma, with only one cut apiece from Deflorate (ever-present, always-awesome closer “I Will Return”) and Everblack (Evil Dead tribute “Raped In Hatred By Vines of Thorn”) getting an airing this evening.

For some people this was clearly a blessing, though, and the band (only two of whom actually played on these albums) ripped through the early material with exactly the same level of venom and energy as the more recent stuff, receiving a suitably rapturous response from a certain section of their audience as a result. And while I definitely wasn’t alone in feeling a little disappointed by this heavy focus on the Unhallowed/Miasma era, that’s really my problem, and not any sort of negative mark against the band… after all, when you have as extensive a back-catalogue to pull from as these guys do, you’re bound to leave a few people unfulfilled every once in a while!

That being said, there’s not really anything negative to say about the band’s performance. As always, they ably straddled that line between militant tightness and organic rawness, never too polished, and never too rough, hitting that sweet spot of devilishly brilliant Melodic Death Metal goodness over and over again, delivering both the roiling grooves of “On Stirring Seas of Salted Blood” and the jolting technical riff frenzy of “Everything Went Black” with the same unholy power and precision as you’d expect from a band with this many miles and this many albums under their belt!

So yes, whilst this wasn’t my favourite show by the band for personal reasons, you can’t fault the sheer energy and enthusiasm they deliver every time they hit the stage. They never phone it in, they never give you anything but their best… and that’s something you can always rely on.

It will be interesting to see if the band make any announcement regarding the absence of guitarist Ryan Knight in the next couple of weeks, however, as current Arsis guitarist Brandon Ellis is filling his spot on this tour, and historically the Black Dahlia camp have tended to save the announcement of any line-up changes until after their ongoing touring commitments have all been fulfilled.

So, feel free to speculate and pontificate over what this means for the band… and, in the meantime, you can catch Ellis performing “What A Horrible Night To Have A Curse” in the video below!