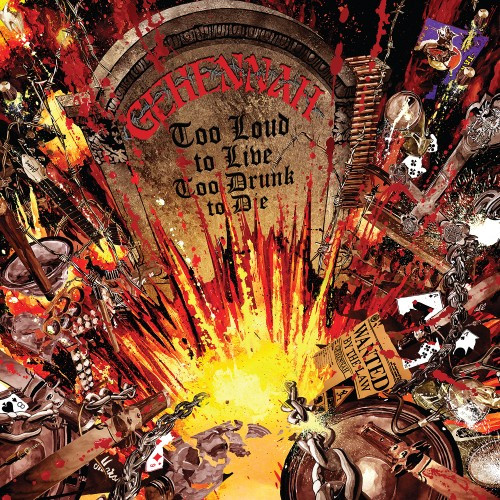 If reports from the early ’90s are accurate, Sweden’s Gehennah stuck out like like a sore thumb in the metal scene (more like a mangled and bleeding thumb) when they first started churning out their raw, raucous, and alcohol-fueled concoction of speed metal and blackened thrash — or at least that’s what we might call it today, because did anyone use the term “blackened” in 1992? The fearless Primitive Art Records discharged their first album Hardrocker in 1995, and that was followed by King of the Sidewalk and Decibel Rebel on the Osmose label.

The party faltered for a stretch of years until the band came out with an anniversary EP in 2003 (appropriately titled 10 Years of Fucked Up Behavior), and then the well seemed to run dry again for another decade — until Gehennah surfaced from a sea of beer cans and whiskey bottles to release the Metal Police EP in 2014. That’s when I discovered them for the first time — for me, it was an immediate grabber, a jet-fueled black/thrash romp with killer riffs, killer soloing, and killer caustic vocals. The alcohol content of my blood went up just from listening to it.

I guess I wasn’t the only one, because that EP led Metal Blade to embrace the band, and on February 12 the label will release the first Gehennah full-length in almost 20 years — Too Loud to Live, Too Drunk to Die. 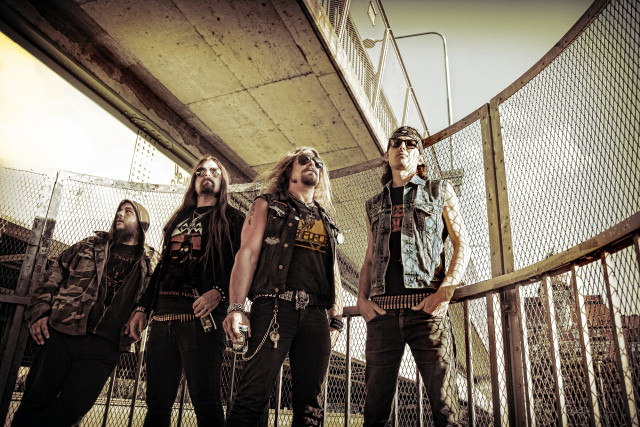 We’ve got a song from the album for you to hear. As you’ll find out if you haven’t yet caught up with other songs from the album that have premiered to date, Gehennah are unrepentant — after 20 years, they’re still doing what they want to do, channeling the deathless spirits of bands like Venom, Motörhead, and early Bathory, cranking out filthy “street metal” like they’ve been doing since long before the resurgence of the style’s popularity in recent years through the power of groups like Midnight.

There’s a very entertaining recent interview with the band’s vocalist Mr. Violence that I recommend you check out here. I thought it would be a good addition to this introduction to quote at least this excerpt from it:

GEHENNAH is something of legendary name in the underground. In part this is because of the Headbangers Against Disco campaign you guys founded. For those who don’t know, can you explain a little of what this was and why you felt it necessary?

Mr Violence: Well, there was a lot of wimping around going on in the scene, so we started a bit of a movement for the more raw, filthy and degraded metalheads, who wanted nothing to do with the white-shirted, well-combed bands that were so popular at the time. We wanted metal to be repulsive to a “normal” people, not try to convince them that metalheads were well-educatad and well-behaved, that seemed to be the goal of the more disco-sympathetic part of the scene. There were the EP’s released on Primitive Art records, highlighting some of the cooler bands around at the time, like INFERNO, BESTIAL WARLUST, USURPER, NIFELHEIM and SABBAT (whose contribution, Baby, Disco is fuck is a total classic!). We also arranged a big two-day party, were SABBAT performed, and everybody got insanely drunk.

Wish I’d been at that party. But hell, “All of the Decadence, None of the Success” will take your head back there in short order. That’s the name of the song we’re premiering. It’s catchy as a virus, raw as a split lip, the devil’s own rock ‘n’ roll.

To order the album, go HERE. And if you dig the song we’re bringing you, just scroll down and check out the video for the new album’s title track.

2 Responses to “AN NCS PREMIERE: GEHENNAH — “ALL OF THE DECADENCE, NONE OF THE SUCCESS””