Altarage come from Bilbao in the Basque Country of Spain, a region of the country with a rich and fascinating history. Metal-Archives lists 138 active metal bands from the Basque Country, including such names as Virulency, Cerebral Effusion, Extirpation, Horn of the Rhino, The Rodeo Idiot Engine, and Knives — to name a few I know of and have written about. But I don’t know of any who sound like Altarage. And even when you leave that land far behind and lift your eyes to farther horizons, Altarage still stand out.

Their debut 7″ EP, MMXV, was released by Iron Bonehead last September, and even at only two songs long, it was an impressively powerful eye-opener. To sum up what I thought about it when I heard it last summer: “This is primitive, poisonous, electrifying music from a band that’s now squarely on my radar screen for the future.” We didn’t have to wait long for more. In just a few weeks, Iron Bonehead will be releasing the band’s debut album, NIHL, and we now have a track from the album named “Batherex” that embraces world-eating destruction with a voracious hunger. 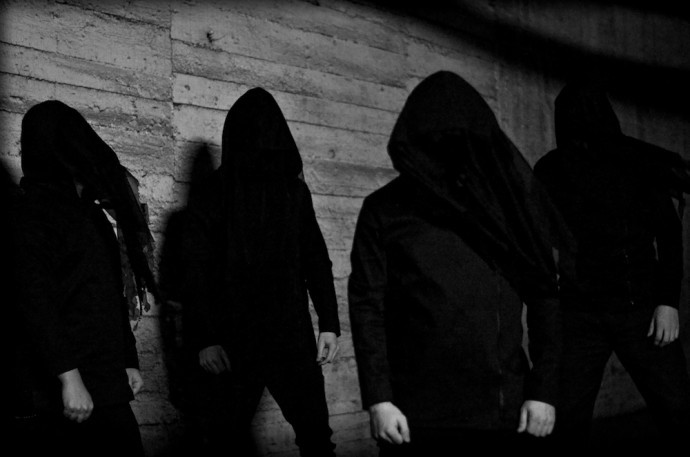 The music is an absolute torrent of vibrant, violent sound, a cyclonic storm of raging riffs and hammering rhythms that almost submerges the vocalist’s scarring howls. But while the sheer malignant intensity of the song threatens to overpower the senses, it maintains a firm grip on the listener’s interest, with the band segmenting the storm with massive, pile-driving blows and infiltrating the savagery with bleak melodic motifs that have a way of getting stuck in the head (like spikes).

Ultimately, the surging barbarism subsides, only to be replaced by something perhaps even more grim and catastrophic — a dirge of massively distorted guitars and ritualistic drum beats, figuratively dragging your staggering body down into an abyss of despair.

NIHL promises to be a stand-out offering of soul-reaping black/death obliteration. Iron Bonehead will release the album on February 26, while Doomentia Records will handle the CD version and Sol y Nieve Records and Sentient Ruin will release it on cassette.

Previously, Iron Bonehead disclosed another track from NIHL — “Womborous” — and in case you missed it, we’re including that stream below along with the advent of  “Batherex”.