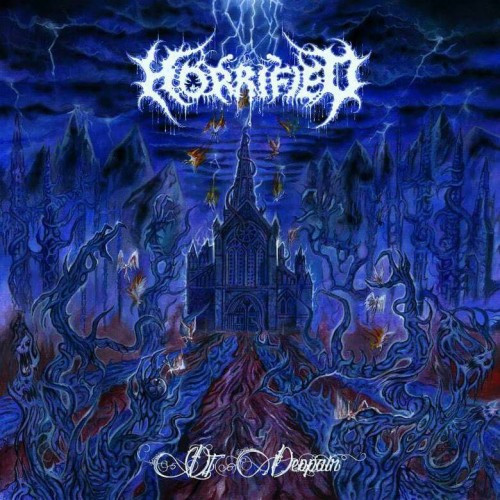 The UK quartet Horrified released an impressive debut album in 2014 by the name of Descent Into Putridity. As the album’s name implies, the music was the kind of nasty, primal death metal that paid its respects to the likes of Autopsy and Pestilence. They’ve now completed work on a second full-length entitled Of Despair, which was mastered by Damian Herring (Horrendous) at Subterranean Watchtower Studios and will be released by Stormspell Records on March 25.

As you’re about to hear (and as you might even guess from the style of the album’s eye-catching cover art by Raul Gonzales), the band have broadened their musical horizons since their debut, taking inspiration from such Scandinavian greats as Dissection, Unanimated, and Sacramentum.

The band’s vocalist/guitarist Dan Alderson described the band’s musical approach for the new album in this way:

“When composing the music for Of Despair, I wanted to write music that could be just as emotionally involving as well as outright savage. I’ve always thought black and death metal can be something more than what it appears on the surface. I hope this album resonates with people and hopefully moves them, just like my influences have done for me through so many years and difficult times.”

What we have for you today is a new song called “Amidst the Darkest Depths“, and it’s compelling evidence of Horrified’s expanded musical horizons. While the song has certainly not completely shed the rough trappings of death metal brutality that characterized Horrified’s debut, the music is undoubtedly more multifaceted and complex. It casts a bleak but memorable melodic aura thanks in part to a piercing guitar solo and a moody instrumental finish, and it also includes searing tremolo chords as well pile-driving grooves and the mad snapping of a snare drum to go along with a lot of agile bass work.

It’s an intriguing teaser for Of Despair and the sign of a band who haven’t been standing still since they first appeared on the scene just a few years ago — and if you like what you hear, check out another track from the album that premiered last month: “Infernal Lands”.

11 Responses to “AN NCS PREMIERE: HORRIFIED — “AMIDST THE DARKEST DEPTHS””