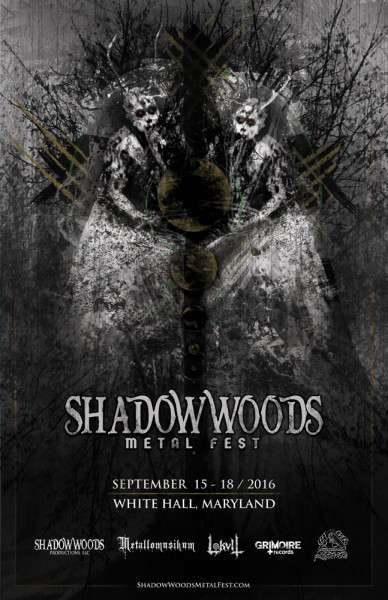 This has turned out to be an exciting day for U.S. festival announcements. In addition to the news that Panopticon will be one of the headliners at the Migration Fest on the west coast, the Shadow Woods Metal Festival also made some announcements about the second edition of their cool event, coming this fall on the other side of the country.

As was true last year, Shadow Woods will be an open-air camping metal party that will run for three days in central Maryland: from Thursday, September 15th through Sunday, September 18th at Camp Hidden Valley, in White Hall, Maryland, the same location where the first edition of the fest was held last year.

Organizer Mary Spiro and her team (who are joined by Baltimore’s Grimoire Records as co-producers this year) have been announcing performers since January, and six more bands were named today. So far, 21 bands are confirmed to perform, and more are still yet to come. Here’s what it looks like as of today:

I wasn’t able to make it to last year’s Shadow Woods, but our friend Kaptain Carbon was there, and based on his comments and photos (posted here), it looks like it was just as great as it seemed that it would be. This year may be even better….

Ticket sales begin on February 12 at noon Eastern, and you can go here for details about that: