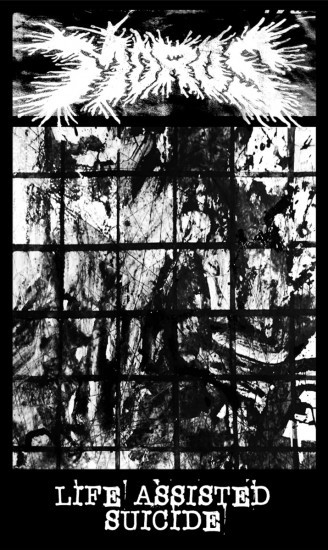 I’m VERY late in writing about this EP — it was released last August. I had started scribbling some typically half-formed thoughts, as one might expect from a half-formed brain, and then got distracted by… something… I can’t remember what. I hope it was an important distraction, because Life Assisted Suicide is deserving of attention. Which is why, six months later, I feel compelled to finish what I started.

The EP is the first release by Philadelphia’s Moros, a triumvirate whose members have spent time in such other fine bands as Krieg and Occult 45. What you’re reading now isn’t the first attention given to the EP at this site. It appeared on the year-end list of Krieg’s Neill Jameson that we posted here in December, where he had this to say about it:

“Debut demo from this Philadelphia three-piece would have impressed me even if I weren’t personally biased since Krieg’s drummer is the guitarist/vocalist. This is a bleak demo that I’m sure fans of Eyehategod, 13, Grief, etc., would find indulges their sensibilities, and a good taste of what’s to come. Definitely one of the best live acts I’ve seen this year as well. Sludge really isn’t my thing since I’m old and I’ve seen so many bands give it a try and just bore the ball hair off of me, so for me to be excited by a project like this hopefully says something.”

Life Assisted Suicide may not be quite as ugly or as heartless as a few other sludge/doom releases I can think of, but your outlook on the future still won’t improve much after you hear it. Most of the time it’s as cold and primitive as a python and as grim as a sucking chest wound. But it will rattle your skull hard, and if you’re like me, you’ll find its poisonous melodies still stuck in your head well after the music stops.

Most of the time, Moros live in the slow lane, or maybe more accurately, over in the deep trench along the roadside where you and your car will end in a smoldering ruin if you take your eyes off the center line for too long. The band’s weapons of choice are enormously sludgy, low-end riffs that will make your teeth vibrate, meat-grinding bass notes, hard-hitting drum progressions, and the judicious application of feedback. On the other end of the sonic range, the vocals are a spray of throat-abrading shrieks caustic enough to eat through skin like lye.

A brutally unforgiving aura surrounds most of the songs, especially in the early tracks where the heaving riffs and staggering pace are only briefly segmented by moments of acceleration or animated drum beats that will put a bit of adrenaline in the flow — though not enough speed to make you think life is being born instead of snuffed out. Yet even there, the moaning chords exert a dismal kind of attraction.

The title track adds a toxic haze of guitars over a rumbling bass line and a catchy melody over a rocking beat, but the track that turns out to be the most infectious is the closer, “Super Void”. It’s still a huge meat-grinder of a song, but a magnetic bass line and equally head-grabbing riffs push it like the drive train of an assaulting tank.

All in all, I’m in complete agreement with Mr. Jameson: This is a very bleak but very impressive first outing, and Moros are a band worth watching. As icing on the cake, Life Assisted Suicide is a name-your-price download on Bandcamp.

P.S. In March, Moros will be on tour along the Atlantic seaboard. The schedule is down below the music player. For more details, go here.