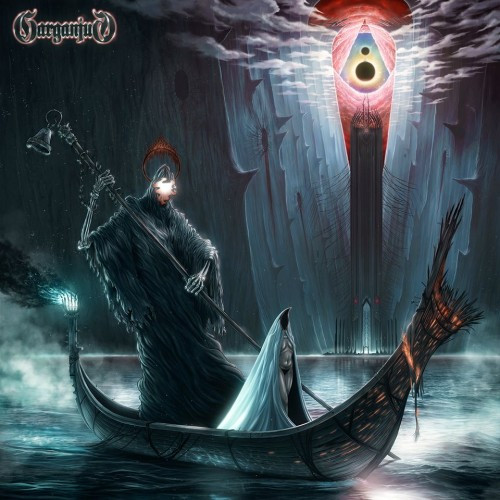 One of the best things about writing for NoCleanSinging – apart from the fame, the drugs, the fast cars, the easy women – is just how much freedom we get here to write about whatever we feel like (within reason), with no-one dictating to us what we have to cover, or when. Instead we’re largely left to our own devices, free to follow our passions or simply see where our listening takes us.

As a result we often stumble across stuff unexpectedly, so it’s almost impossible to predict, week-in and week-out, precisely what we might be writing about, with any reasonable degree of accuracy.

Today’s review is a case in point, as I discovered the doomy delights of Garganjua purely by accident over the weekend, drawn-in by the eye-catching artwork which adorns the cover of this, their self-titled debut album. 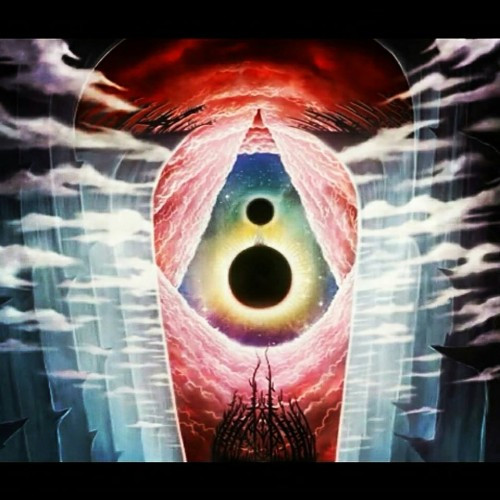 Now, funnily enough, when I first told Islander I was going to be reviewing this album his initial response was “huh, I didn’t know you were into that sort of thing”, which makes it sound like he’s suddenly discovered that I have a penchant for some sort of particularly illicit sexual practice (I do, but that’s beside the point…).

Granted, this sort of Stoner/Doom leaning stuff is something I only occasionally dabble in, although there’s definitely a few bands of the style that have pride of place in my collection. However, the very fact that I’ve decided to jump on the Garganjua train, despite not being a part of their usual scene, should give you some indication as to just how good A Voyage in Solitude is.

As long and drawn-out as the song is, though, it never starts to drag, with the Leicestershire three-piece making ample use of their extensive run-time by periodically switching up the tempo and delivery to keep things snappy and varied throughout.

Whether they do this by occasionally speeding things up to a rumbling, pseudo-thrash gallop or by pulling things back in order to inject a welcome dash of clean-sung melody (curiously reminiscent of Undertow-era Tool) into the proceedings, the final result is a song that’s utterly saturated with thick and juicy hooks designed to get your head moving to the booming beat.

“Isolation” is clearly more overtly melodic than its predecessor, with the clean vocals taking on the lead role this time around, though it still carries all the necessary weight and heft that you’d expect from a band plying their wares in the narcotic-fuelled Stoner/Doom scene.

As a matter of fact this balancing of gut-rumbling heaviness with an undercurrent of sweet (but never saccharine) melody is perhaps the song’s biggest selling point, as the crisp, clean vocal lines and subtle lead guitar embellishments somehow weave a nimble waltz in harmony with the track’s dense, thrumming distortion and burly, lumbering percussion, in a perfect study of creative contrast and control.

The title-track “A Voyage in Solitude” seamlessly blends a sensation of intense, driving urgency with some truly mellow, blissed out grooves, the low, throbbing hum of its mammoth guitar work ably balanced out by the slow-motion drift of the song’s clean-sung verses.

Around about the 3-minute mark the band introduce what must be one of their absolute finest riffs – brashly infectious and utterly irresistible in its simple, yet undeniably effective, form and function – and then proceed to ride it straight into the throat of the song’s drastically doomier second half, where ominous waves of looming, glacially-paced riffs bear down upon the listener with grim, merciless intent.

This cathartic, crush-syndrome atmosphere eventually gives way to the song’s beautifully evocative outro, which practically weeps melody and emotion from every pore even as the guitar and drum work continues to rumble and grumble with primal power.

For a band/album often tagged with the “Stoner” sobriquet, final track “Extinction” has a surprisingly solemn and despondent vibe, particularly during its sombre opening bars, where echoing clean guitars pick out a bleak and haunting melody over a slim and listless drum beat, which eventually transitions into a mournful funeral march of thickly-sinewed riffs and aching melodic vocals.

The mid-section of the track takes a darker turn with the reintroduction of those brutish, wounded death-vocals from the start of the album, with the guitar work also taking a doomier, gloomier turn to match. Roiling and boiling and churning like burning molasses, it eventually dissolves into a teasing, clean-picked interlude which serves as a necessary respite before the final build towards the album’s suitably gargantuan, melancholy conclusion.

Ultimately, while A Voyage in Solitude certainly doesn’t reinvent the wheel (nor is it trying to do so), it’s still a damn good ride, taking the listener on an impressively dynamic journey through the soaring mountains and brooding valleys of the group’s distinctive brand of Stoner/Doom delights.

Fans of bands like Yob, Ahab, and Sleep would certainly do well to check out this band of colossal riff-mongers post-haste.

9 Responses to “GARGANJUA: “A VOYAGE IN SOLITUDE””