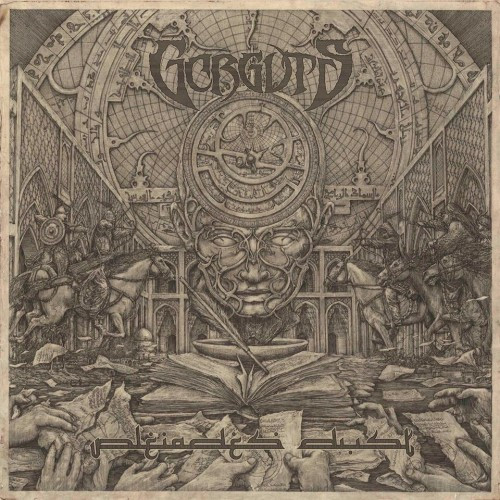 That comment has now jokingly been repeated in our comment section so many times in the subsequent years that I can almost recite it from memory. I shudder to think how often it will appear this December, when there actually IS a new Gorguts release in the year-end running — as it surely will be. 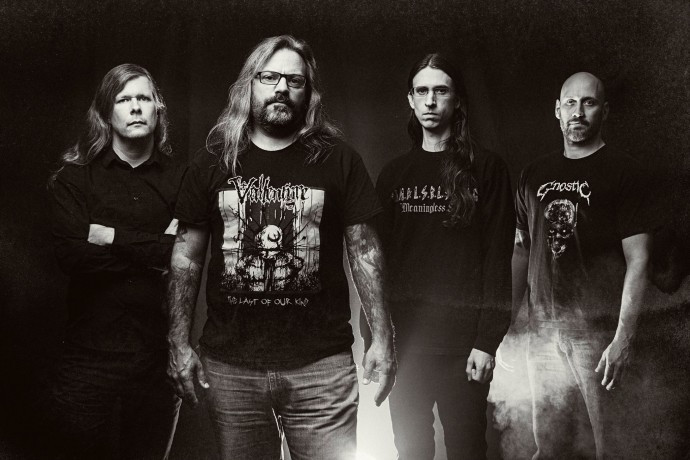 The new 33-minute EP is named Pleiades’ Dust, and Season of Mist will release it on May 13. For this album, main man Luc Lemay is again joined by guitarist Kevin Hufnagel (Dysrhythmia, Vaura, Sabbath Assembly) and bassist Colin Marston (Dysrhythmia, Krallice, Behold…The Arctopus), with drummer Patrice Hamelin replacing John Longstreth. The album is a single long composition, and yesterday an excerpt premiered at Stereogum. I think it’s worth quoting what Luc Lemay said about it:

“As our EP Pleiades’ Dust consists out of a single long narrative composition, it was not written with the intention of being edited in segments. As the storyline proceeds in chapters though, I was able to isolated this part called ‘Wandering Times’ which will give the listener a good idea of the composition aesthetics which are present throughout the whole piece. The lyrics tell the story of the ‘House of Wisdom’, which is referring to a library that was based in Baghdad sometime between the 8th and the 13th century. There much of the intellectual activity of the Middle Age took place while Europe was stuck in the Dark ages after the fall of Rome. Many scientific discoveries were made at the time such as algebra, optics, astronomy and many more… Without the translation movement that brought this library to life, we would have never had the Renaissance that we know. It is a story about curiosity, beautiful minds and sadly, about how man destroys great discoveries and achievements.”

Pleiades’ Dust features cover art by the amazing Zbigniew M. Bielak, and his comments on the artwork are also worth reading:

“As a child I was fascinated by the Middle East. My uncle used to work on civil engineering contracts in Libya and Iraq, so we kept receiving exotic, mosque-graced postcards throughout the otherwise lacklustre eighties behind the Iron Curtain. I have a genuine affection towards the region’s architecture, climate and aesthetics, therefore it was a pleasure to illustrate Luc Lemay’s new concept, which is a tribute to the scientific heritage of the Islamic Golden Age.

“Although the pun of the album title was not intended – as much as NASA supercomputer Pleiades today, Baghdad’s Bayt al-Hikma – The House of Wisdom, epitomized the Middle East’s scientific sophistication. Boasting the largest library of the medieval world, this vibrant multicultural research and educational centre, drew in learned scholars including those of Jewish, Christian or Buddhist origin to translate, preserve and further develop important works of scholarship from across Europe and the Middle East whilst the Occident regressed into Dark Ages.

“Spanning from the 8th century of our calendar to its symbolic ending with Genghis Khan’s grandson’s bloody Siege of Baghdad in 1258, resulting in obliteration of the House of Wisdom, The Golden Age of Islam left the world much indebted also to its numerous original contributions in diverse fields. From astronomy and medicine, to humanities and mathematics, Islam’s heritage helped pave the way for the rise of the West to its present prominence.

“The mind-bending intricacy of GORGUTS’ aural landscapes portrayed in this single, over thirty minutes long piece of almost classically structured music, lends an aptly dramatic narrative to the story of a leading civilisation abruptly returned to dust.”

And with that, you should go over to Stereogum and listen to the excerpt of music:

We will of course welcome your thoughts in our comment section after you’ve heard the music. I agree with what Doug Moore wrote in his introduction at Stereogum: “it’s a thrilling experience”. It’s heavy and jarring, dissonant and intricate, dense and dramatic, eerie and meditative, with a sinuous Eastern melody that surfaces in the midst of all the head-spinning instrumental complexity. Can’t wait to hear what follows these first six minutes of Pleiades’ Dust. 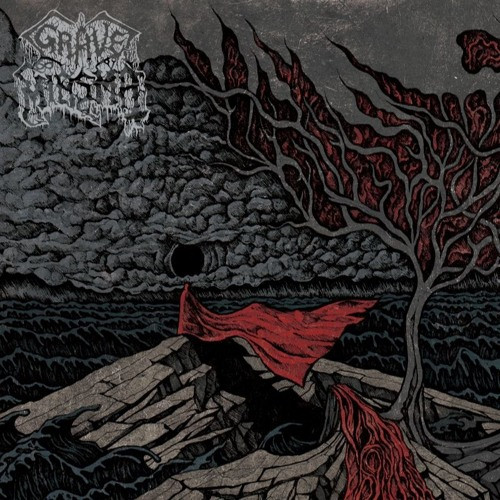 When I reviewed the debut album by London’s Grave Miasma in 2013, I wrote:

“Odori Sepulcrorum is easily one of the best blackened/death/doom albums of the year. Although it is very difficult to compare albums across all the manifold sub-genres of death metal, it surely must also be considered among the best death metal albums of 2013 regardless of category.”

And so, you can imagine how excited I was to read yesterday that the band have completed work on a new EP named Endless Pilgrimage, which will be co-released on CD/LP by Sepulchral Voice Records and Profound Lore Records. It features cover art by Costin Chioreanu and includes a re-recording of the 2002 demo track ‘Glorification Of The Impure’ plus four new songs. Here’s the track list:

Yesterday, the band put the third track on Soundcloud. “Purgative Circumvolution” jumps forward from the start, with the drums driving like pistons and deep, savage riffs spilling a morbid miasma like blood from an open vein. The song also includes scintillating solo work and vocals that are superheated with bestial passion, along with a satisfying degree of creativity in the drumming and lead guitar machinations. 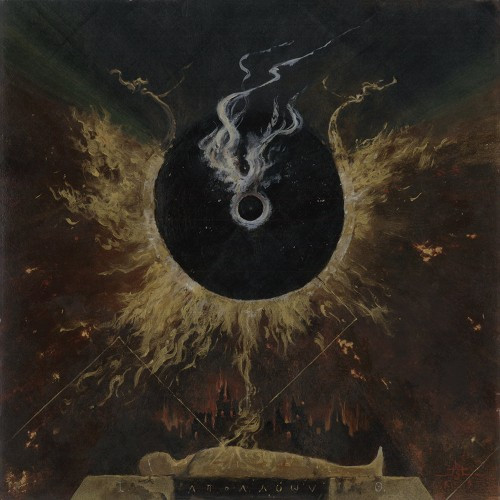 Here’s the third song in a row from a new release that features cover artwork by an exceptional talent, in this case David Herrerias. The band is awfully damned good, too.

Sweden’s Irkallian Oracle made a big positive impression with their 2013 album Grave Ekstasis and now they have a new full-length named Apollyon that was released on February 22 by Nuclear War Now! Productions. I haven’t yet listened to the new album in its entirety, only a song that appeared on YouTube not long ago. It’s excellent.

“Elemental Crucifixion” begins in disturbing fashion, with a collection of ghastly croaks, gurgles, and screams — and then it begins to rumble and thrum, with equally gruesome, gravel-throated vocals and near-atonal, vibrating riffs that generate an abysmal atmosphere. Soon the drums take off in a paroxysm of blasting, and the guitar chords begin writhing like a frenzied snake, punctured by the crash of cymbals and the snap of a snare drum.

The music is grisly and grotesque, atmospherically morbid and depraved, but instrumentally interesting, a song in which the bass and drum really play the starring roles. Near the end, there’s a pause in which the listener is enveloped by deep droning tones and another cacophony of deranged, inflamed voices, followed by a final tank-like assault.

The album is available as a digital download on Bandcamp for $5, though the songs aren’t currently streaming there. It’s available on CD here.