I wasn’t able to compile a round-up of new things for yesterday, which means that I’m now up to my eyebrows in news and music that I’d like to share, or I would be if I had a head. But figuratively speaking, I do have more items worth spreading around than I have time or space to compile. Therefore, I’ve chosen somewhat randomly. But the first two choices were compelled not only because I’m a big fan of both bands but also because the artwork for both is stupendous.

Today Sweden’s In Mourning revealed details about their new album, including the magnificent cover art that you see above, which was created by the magnificent Kristian “Necrolord” Wåhlin. The name of the album is Afterglow and it will be released by Agonia Records on May 20. 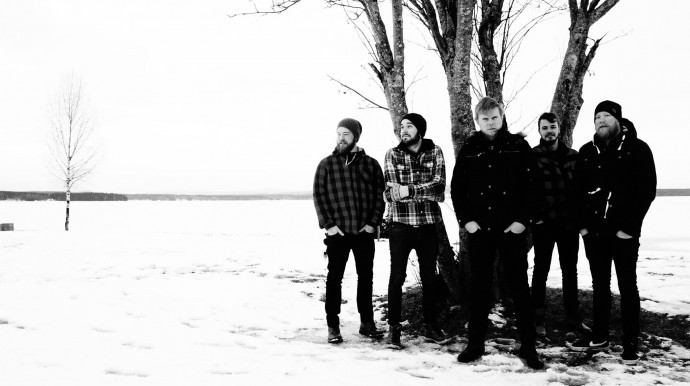 About the album, the band commented:

“The new album is called Afterglow and its story takes off from where The Weight Of Oceans ends. It’s a bit more complex than our previous albums and it has got a bit of a different sound than the older ones, a bit more alive like a band and maybe not always as studio corrected as our earlier material. However, the foundation of the music is still what we’ve always done and the key elements are pretty much the same but with some new additions and a few new twists and turns of course”.

This will be the first album featuring new drummer, Daniel Liljekvist (ex- Katatonia). Here’s the track list, for what that’s worth:

The next piece of eye-catching cover art was created by the marvelous Italian artist Agostino Arrivabene (originally under the title “Theoin II”), and it adorns a new album by the idiosyncratic Howls of Ebb entitled Cursus Impasse: The Pendlomic Vows. The album will be released by I, Voidhanger in a jewel-case CD edition with a 16-page booklet on April 15 (vinyl and cassette editions will come later via Nuclear War Now! Productions and Caligari Records, respectively).

I have the track list for the album, but in this case I also have one of the songs to stream. First, here’s the list:

It is extremely difficult in this day and age to create extreme metal that is truly distinctive; and in many instances when artists try for “truly distinctive”, they wind up with “borderline unlistenable”. Not so in the case of Howls of Ebb.

Take this new song, for example. Its name is “Cabals Of Molder”. It pulses with arcane energy and bursts of wild echoing howls and growled incantations. Guitar solos rise up in shrieking exclamations of derangement. The pacing turns from a thundering gallop to a disorienting stomp-and-stagger laced with discordant notes and alien moans and screams. I found the song transfixing and, in its own strange way, very catchy. 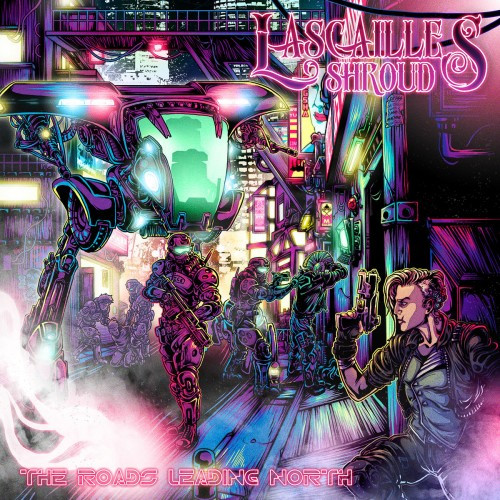 For the next item I’ve selected new songs from the next album by Florida-based Lascaille’s Shroud, which is the alter ego of multi-instrumentalist Brett Windnagle. The new album (the third from this project) is named The Roads Leading North, and it features clean vocals by Patrick Parris (Project: Roenwolfe) and harsh vocals (as well as additional clean ones) by John Yelland (Judicator).

The album carries forward a science-fictional narrative arc in which the protagonist Elizabeth North is hunted by a company known as the ‘Diaspora Initiative’, which is bent on finding a way to clone and replicate the sentient colony of nanomachines inside her for their own sinister purposes — despite the machines’ world-destroying powers.

So far I’ve found two songs from the album, and you can hear both of them below via lyric videos. “Unspeakably Defiled” (with exclusively harsh vocals) is perhaps the more grimly aggressive of the two, “What Dwells Beneath Her Flesh” the more generally slower-paced. Both interweave fluid synthesizer and guitar melodies into the hard-edged music in a way that sets hooks in your head while the dynamic rhythms and riffs get the blood racing. Fascinating progressive death metal that really does sound like the unfolding of a dramatic story. 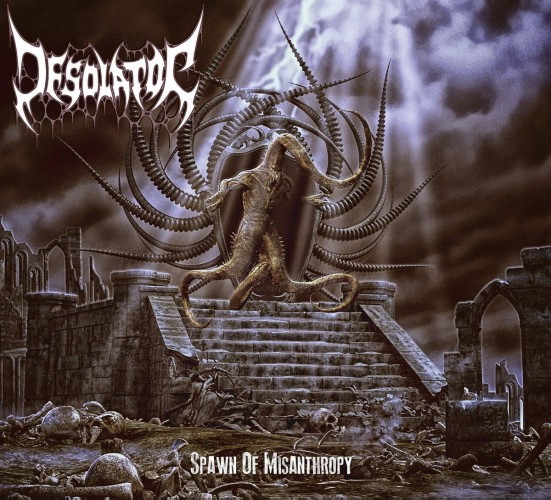 I learned of Desolator via a Facebook recommendation by Professor D. Grover the XIIIth. They’re a Swedish death metal band formed in 2009 whose music the Professor likened to Immolation, which was all I needed to know before deciding to leap headfirst into their new EP, Spawn of Misanthropy. The fact that Teddy Möller contributed a guitar solo on “Illusions of Grandeur”, as well as backing vocals, was icing on the cake.

I was hooked immediately by the massive (and massively headbangable) start to that very song, which launches the EP, and was caught in the iron grip of the music from then straight through to the end of the EP. The band effectively combine earthquake grooves, flensing riff swarms, a titanic rhythm section,  satisfyingly bestial growls, and seductive tendrils of melody that snake through the music (and your head) like some alien life form that feeds on your heat.

The well-written songs are also arranged in a way that creates a dynamic flow and makes this a good release to hear straight through — though each of the individual songs will make for pleasing surprises when they pop up in a shuffle on your music player, too. A huge surprise, and a gleaming black gem unearthed here in the new year’s first quarter. (Thank you Professor!)

6 Responses to “SEEN AND HEARD: IN MOURNING, HOWLS OF EBB, LASCAILLE’S SHROUD, DESOLATOR”