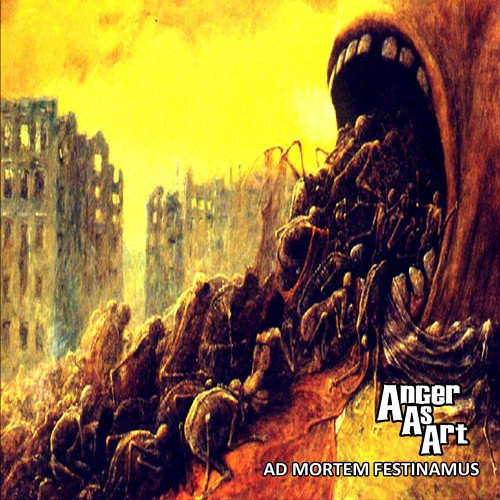 Anger as Art’s new album Ad Mortem Festinamus (“We Hurry Into Death”) is a non-stop thrill ride, and today we’re giving you the chance to experience it for yourselves one week before the official release date through our premiere of a full album stream.

This is the fifth full-length released by a veteran group of musicians who’ve paid dues in other bands, and it’s the sort of album that fully displays the experience, the song-writing talents, and the top-shelf performance skills of people with a deep knowledge and love of heavy metal. But it’s also full of fire and fury, as you would expect from a band named Anger As Art. 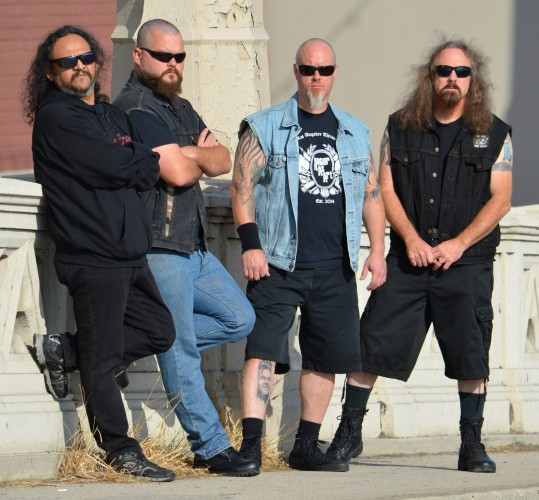 The backbone of the album is thrash, and the band have packed it with a gold mine of flying riffs, full-throttle drumming, and hook-filled melodies — in other words, sure-fire mosh meat and high-octane headbang fuel. But a big part of what makes the album such a thrill ride is that it’s far from a one-note musical experience.

In fact, there’s really no song on the album that stays in the same gear all the way through. Anger As Art are a hell of a thrash band, but when they hit the afterburners and kick their musical muscle car into overdrive, they rocket into speed-metal territory. To mix metaphors, when they really crank up the speed, it’s like being caught in a wildfire propelled by gale force Santa Ana winds barreling out of a SoCal mountain pass.

The band also back off the red-zone pacing with sinister forays into the outskirts of death metal territory, and you’ll get hints of power metal in places as well. Beyond that, they deliver an emotionally powerful, classic heavy metal anthem in “Praise of the Firehead”, which features a surprising acoustic intro and gritty clean vocals, and they also deliver moments (as in the closer “Dim Carcosa”) that bring Lamb of God to mind).

The album also features considerable variety in the vocals (and there’s more than one vocalist in this band), ranging from throaty snarls, to the kind of high screams that sound like a pissed-off panther about to pounce, to venomous death growls and inflamed gang shouts.

And then there are the scintillating guitar solos — which are worth the price of admission all by themselves. Whether delivering a flamethrower blast of fiery shred or fluid melodic numbers, the soloing is constructed and performed at a really high level. If you want a good example of what I mean, check out “Tombward”, which is also a good example of the band’s stylistic and rhythmic dynamism.

There are 11 songs on the album, and I think you’ll find, as I did, that each one has its own character and that the album as a whole stands up well to a straight run-through.

Ad Mortem Festinamus will be released by Old School Metal Records on March 11, 2016. To pre-order the album, go HERE.