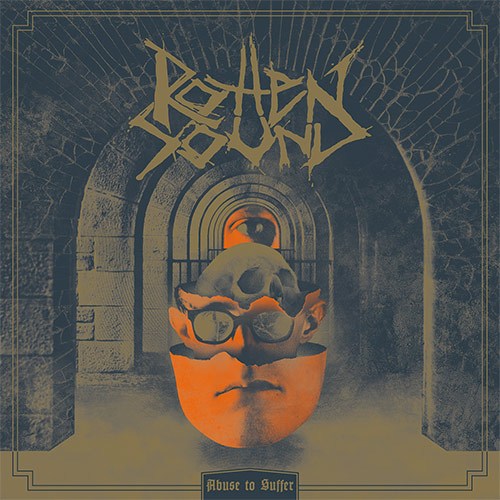 The life expectancy of most metal bands is not much more than that of a child born in a gutter as the Black Plague was sweeping Europe. Those that have survived to see their 20s are often crippled, exhausted, and only going through the motions. And then there’s Rotten Sound.

Born in 1993, they’ve now marked the start of their third decade with a new album named Abuse To Suffer, which will be released by Season of Mist on March 25. If we could harness the energy on these 16 tracks, we could kiss fossil fuels good-by and power our cities and gas-guzzlers on nothing but… rotten sound. Countless grindcore bands (and combatants in other genres as well) have been influenced by this one’s combination of incendiary speed and skull-cleaving heaviness. Maybe it’s like being chased by your children (if they were cannibals wielding knives), because Rotten Sound just seem to run faster, harder, and angrier than ever.

What we have for you today is the debut of a full stream of Abuse To Suffer — but that’s not all. We’ve also got a track-by-track commentary below the stream from the members of the band: Keijo Niinimaa (vocals), Mika Aalto (guitar), Sami Latva (drums), and Kristian Toivainen (bass). Read that, so you can find out about the song with a rap influence, the one built on a riff received from Tommy Iommi in a dream, and what kind of music you make after two bottles of Czech Bozkov Tuzemsky Rum.

As for the music itself, we’re including it on two streaming platforms, but either way you’ll get the full dose of electrification (and electrocution). To pre-order the album on CD, LP, and cassette, go HERE. 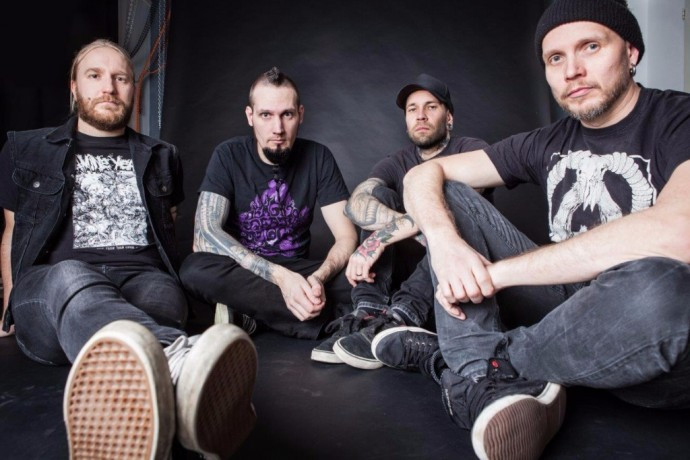 “Our first track starts with an intro by our friend Heikki Järvi, who also did the samples for ‘Exit’ in 2004. We did not ask for anything specific, but somehow the disturbing sounds he created are setting the exactly right mood for this song, which is one of the most aggressive tracks on our new album. Even by our standards, ‘Lazy Asses’ kicks in pretty explosively: fast guitars, blasting drums and an opening grunt, which was strongly influenced by the beginning of the ‘Brain Corrosion’ album by Dead Infection. It is Sami’s song, who openly admits that the idea for this grunting stems from our Polish friends, and I recall that he used their scream on the original demo. Everything about ‘Lazy Asses’ revolves around grind and that is the reason why we placed it at the start although there are other ingredients on this album. The title is pointing a finger at the ultimate waste of money and time: free-riders in the politics. I am sure everyone can easily name a few of them.”

“We listened to a lot of progressive rock while we were touring in Europe with Coughdust, bunch of ‘too perfect bands’ like Toto and Thin Lizzy. I guess that’s how I came up with an “odd time” riff in the center of the song. The rest is matching d-beat and grind, but the core is the main part where the lyrics are about the insanity of selling the prime time of our lives, nine to five.”

“When Bongripper released their latest album Miserable some time ago, I noticed that I had been listening to that album for two weeks straight. My hard drive was as full of these sludgy riffs, which made me go to sauna and drink a few beers. After the sauna I decided to listen to all of those riffs and find out if there’s anything useful. I ended-up deleting all but one of the riffs and built the whole song around it with d-beat, grind and a mosh-part.”

“When we toured last time with Trap Them, Chris Maggio was still playing drums with them. After watching his creative playing he became one of our favorite drummers in the world. The drums on the main riff of this song are heavily inspired by his drumming and the rest came together really fast after that. Keijo must have had a boozing-time of his life when writing the lyrics because he mentioned something about unhealthy eating from trash.”

“There was a week or two in the summer of 2014 when I was mainly listening to Big Ls ‘Lifestyle Ov Da Poor & Dangerous’ and Repulsion’s ‘Horrified’. We had a scheduled instrumental practice to finalize some song ideas, but I knew that Mika and Sami would be pissed if I didn’t have any. I sat down with my guitar and quickly came-up with this idea of lazy beat with HM-2 guitar on top of it. Then I added a Repulsion-style riff and voilà, I had a song. It didn’t really sound like I had thought originally, but now we finally have some rap-influences on the album.”

Time for the Fix (Sami)

“I had a dream where Tony Iommi was playing in my house. I asked if he could give us some riffs for the new album. He looked at me and said that he had tons of crappy ones which could be thrown away. He played a couple of those, but in the middle of the 2nd song my dog woke me up and I had to go and take him out to take a shit. I picked up my guitar after the walk and tried to memorize the riffs. That’s how this song got started.”

Slave to the Rats (Keijo)

“This was one of the coolest songs to do lyrics and vocals because the main riff and chorus are pretty damn catchy, but still dissonant and aggressive. The story is about female drug-lab worker, who is being exploited by the small time criminals watching over the work. It’s an aggressive mid-tempo-fast track, which I really wait forward to play live.”

“This song became an instant favorite with all band members on hearing the demos and drumming at the studio. Sami had paid a lot of attention to the riffs, fills, hooks, and flow to keep the song interesting. The track starts at mid-pace, but goes full speed in the middle part, which also guided my singing. The vocal arrangements are a little bit unconventional as I wanted to avoid having a chorus, but I still aimed for some repetition in the fastest part to grind some more. This massive track shows variety and it has already proved to be extreme fun for us live. The lyrics are pretty graphic and revolve around the topic of brainwashing people to become soldiers for some ‘important’ cause. The words ‘brainwashed to murder’ at the end are underlining the fact that nobody is born to kill.” 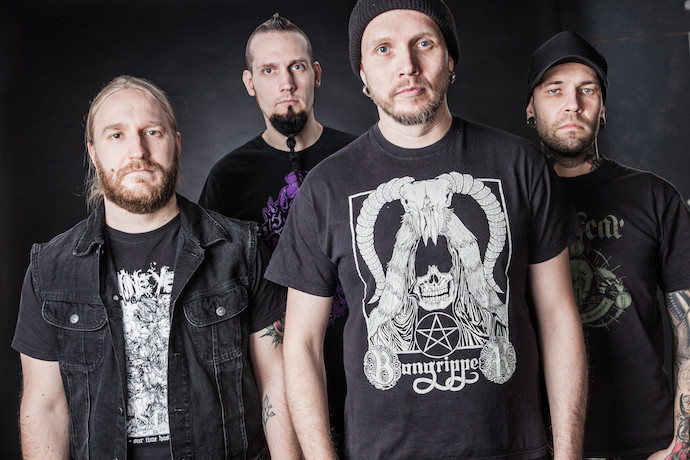 “The song starts with Napalm Death-style mid-tempo groovy riff, which made me think that the vocals must begin immediately with low Barney style of grunting. The rest of the song is probably more Rotten Sound with dissonant riffs by Sami, up-tempo blasting and a heavy mid-part. Somehow this song stood out to me with the extreme tempo-changes and stop’n’go-style when it really gets going. Lyrics are pretty straight-forward text about soldiers, who are forced to do whatever is being ordered from above.”

“This one was inspired after some heavy drinking after a hard week of work. I had had some really bad Finnish fake-whiskey, which made me pass out and I woke-up in the morning with a terrible head-ache some piss in my pants. Thus the song title ‘Yellow Pain’, which Keijo turned into a story about the misery inside the sulfite mines.”

“I was on holiday in Vaasa and went to Mika’s rehearsal place. Mika started to jam some stupid ‘Megadeth‘-riff with his V-Jackson tuned in E-standard. I took his guitar and smashed to the wall. Mika got really pissed about that, but when I played a demo of ‘Machine’ and showed him the riffs with my drop A-tuned SG he calmed down. We played ‘Machine’ a couple of times and decided that it had to go in the new album.”

“We went to jam with Kristian one time. I had this sick bass-intro riff and Kristian had a bottle of Czech Bozkov Tuzemsky Rum. Next morning we woke up with a terrible hang-over and had just the intro-riff, but with 2 bottles of rum we managed to create the entire song just fine. Keijo is apparently singing about some corner-store clerk in poor neighborhood, whose work is being terrorized by robberies and violence around.”

“‘Caged’ is a mid-temp song, which was almost by another verse-bridge-chorus-structure. We were jamming the song with Mika and Sami and I didn’t really know what to do with it, so we simply decided to stop playing after the slow part. You can always listen to the song again if it feels too short, so why stretch it? The shorter the better!”

“Sami had recorded the fastest drums ever played by a human being into this song. I remembered that he broke my V-Jackson and decided to delete everything else besides the hi-hat and vocals from that part when the other guys went out to have beers after a long day in the studio. The next day Sami was having a head-ache and didn’t want to play the fast drums again, which turned ‘Retaliation’ into what it is now.”

“As I did not plan ‘Inhumane Treatment’ to become a Rotten Sound track, it was easily done without any stressing. I was just playing around with some riffs and thought about writing a slow death metal song in the style of Bolt Thrower and Dismember. It had quite many riffs, but after I while I got bored with all that slowness, added grind and d-beat parts and turned it into our tune. Keijo is using the classic ENT-Doom-UK-crust-grandpa-vocal-style in the chorus, which works like a charm on top of the d-beat.”

“I blackmailed the other guys to write a long song for the end of the album, but they simply could not do it. That’s why I decided to keep on playing the end of the song as long as it is now, and Keijo wrote some lyrics about some drug-dealer, who owes a lot of money and is being blackmailed to get them paid.”