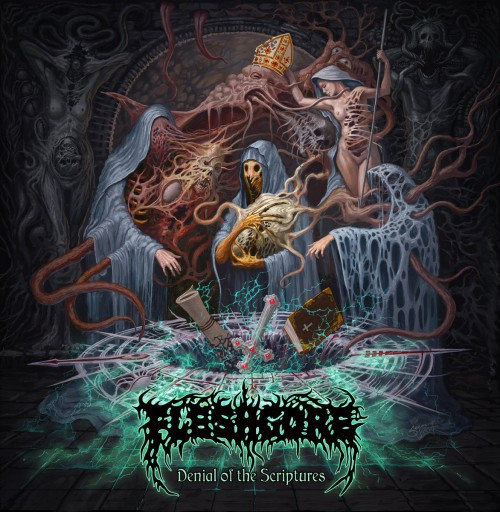 (DGR reviews the new album by the Ukrainian band Fleshgore.)

In the annals of death metal history, few names will likely be considered as “on the nose” as FLESHGORE (which is the type of name that screams that it must be typed in bold letters, all caps, at all times). There will be scant few people who will see the name, hit play, go through the opening few minutes of Denial Of The Scriptures, and then stand there slack-jawed and wide-eyed and declare, “I have no idea what I was expecting”. If not by name alone, then certainly the tentacle-filled artwork should at least tip you off that the music contained within is heavy.

But rather than turn this into a lecture on the effectiveness of death metal group naming conventions, we really need to drill down into the core of this music. FLESHGORE are a three-piece brutal death metal band hailing from Ukraine consisting of a bassist/vocalist combo, a guitarist, and a drummer. Their new album, the aforementioned Denial Of The Scriptures, came out at the end of February. 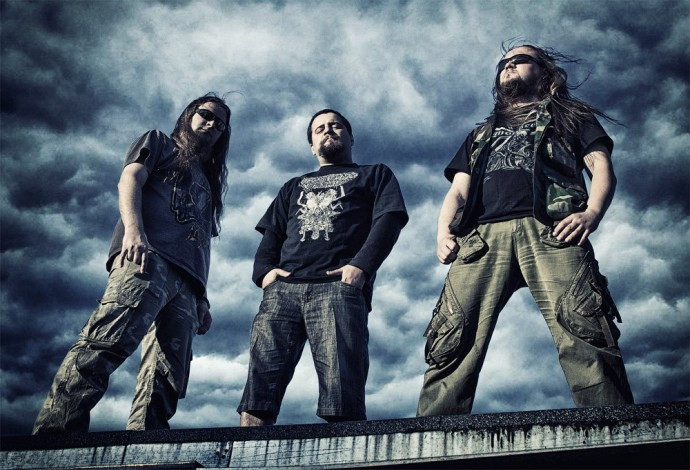 Denial Of The Scriptures comes from a very specific branch of the death metal tree, the type defined by its brutality and sheer head-smashing force. It is the type of music in which the rhythms appeal strictly to the reptilian part of the brain, slinking their way past all of our higher, more evolved, and intelligent features and dragging us all the way back to Cro-Magnon savagery where hitting someone in the face with a club was normal, something we’ve long since pretended to shed in our daily trevails — no matter how satisfying the crunch sound remains. FLESHGORE play that style of brutal-death, where the focus is so singular and narrowminded that you can’t miss the mark, because there really is only one thing they are aiming at. When the band names an album Denial Of The Scriptures and the opening song is cheekily named, “Talk To Me About God”, then all bets are off, you know exactly what you’re in for.

What makes a release like Denial Of The Scriptures absolutely lethal is that it is a very well put-together combination of the two elements that define FLESHGORE’s sound.

One is the most familiar; FLESHGORE’s corner of the world seems to have become one of those places that consistently spawns gore-obsessed brutal death and goregrind bands.

FLESHGORE live up to that reputation with a bludgeoning sound that should be very familiar to death metal listeners, with the sort of production that leads to a guitar being eaten alive by the fat, low-end of rumbling bass — because how else do you beat a man to death using sound? — and a snare drum so diffuse that it sounds like it was recorded underwater. On top of that, you have death metal vocals so low that they achieve inhuman status from the first note and every grunt after that could easily serve as a voice acting reel for anyone playing an Orc in an upcoming movie.

FLESHGORE have the slam and chug sound down pat, resulting in songs that sound like piles of meat (or gore, if you’ll have it) being thrown on the floor, as should be evidenced from the first notes of “Talk To Me About God”, but it also makes up a vast swath of material on this album. The group move effortlessly between hammering sections like clockwork, with the precision of piston-fired machinery. Each bass strum rumbles the Earth, and the band purse each note with a hefty amount of blasts and guitar-sawing.

The songs on Denial Of The Scriptures move quickly, too, with a variety of rhythms and grooves packed into each track. The album’s second song, “Inception of Incursion” moves from a Behemoth-esque percussive opening into a massive and canyon-wide dirge before becoming an apocalyptic deathstorm of notes and growls, all within its opening minute. The efficiency by which FLESHGORE deliver a lot of their brutality can actually become somewhat overwhelming at times. “Inception Of Incursion”, though, is actually one of the few times when the vocals aren’t as low as the Marianas Trench and you can actually understand them.

The second element that defines FLESHGORE sound is that they have something of a hidden taste for making their aforementioned grooves surprisingly melodic and sharp. “Talk To Me About God” has such a moment halfway through that makes it difficult to go past that song. It doesn’t start the album with a showstopper, but for a while, it was difficult to review Denial Of The Scriptures because tomes could have been written solely on how “Talk To Me About God” starts out as an angular blast-fest before dropping one of the heftiest and most neck-snapping grooves about halfway through, so successfully that it almost defines the song.

“Inception Of Incursion”, which I focused on previously, has a vocal line that also gets its hooks in you at a nightmarish level. “Stop The Possessor” tries to buck the trend a bit by being a hurricane up front, but it becomes another beefy groove-fest for a good chunk of its duration. FLESHGORE’s hidden calling card lies in that groove-and-hook sensibility, so much so that you actually kind of forget how up-front the group’s name is, and by the time “Killing Relapse” kicks in, you can’t help but be headbanging along.

A humongous chunk of Denial Of The Scriptures has bassist/vocalist Ruslan Drozd deploying a terrifying death growl and alternating between being so low as to sound like belching fire and the occasional squeal. When I mentioned how straightforward and narrow the band’s aims are, on the vocal front, that is a definite truth. You never go broke playing to the cheap seats, and if the low-as-all-hell vocals are part of the brutal death genre, then goddamnit, FLESHGORE have that in spades.

The last third of Denial Of The Scriptures feels more like the rhythm section gone absolutely mad. I don’t know what got into FLESHGORE during the writing for “New Ordeal Comes Into The World”, but after the opening groove section it sounds like the band just went absolutely apocalyptic on the blast beats, and that section is one of the best of the whole disc. Part melody/part world-ender and all fantastic.

“Numinosum” does something similar during its opening, and the old axe about death metal guitars sounding like buzzsaws comes into play big time during that opening, although I’m not sure if the guitar sounds like a saw so much as one might actually end up being sawed in half by the sheer speed at which it is being strummed by the end of that song. “Numinosum” is one of the more relentless and traditionally “brutal death” songs on Denial Of The Scriptures.

Denial Of The Scriptures is the sort of disc that will absolutely sap you of headbanging endurance by the end of it. It is by and large a brutal death metal disc with a bit of a gore obsession, but mostly a targeted hatred of religion. But it is a brutal death metal disc where FLESHGORE get up to some of the fattest groove work I have heard in some time, and each section that isn’t the sort of “end-of-world-warfare” style blast-beat death metal bit has some of the catchiest rhythms out there. It’s a huge slab of red meat for genre fans but also has a bunch of hooks (meathooks?) in it that could draw in new people, simply because once you get past the outer layer of the band it is insanely difficult not to find yourself subconciously giving in to the reptilian instinct to nod your head at each chugging section FLESHGORE dish out.

Just be aware that Denial Of The Scriptures is a dense disc, recorded as if this style of music would never be recorded again — so there is a TON of it packed into its slightly-sub-forty-minute runtime. All nine original tracks are hefty as hell and the one cover song is transformed into a massive track in its own right. By the end of the whole Denial Of The Scriptures spectacle you will likely walk away with a severe neck ache.

5 Responses to “FLESHGORE: “DENIAL OF THE SCRIPTURES””