Here we are, nearing the end of 2016’s first quarter, and an unheralded album by a Virginia band I previously knew nothing about turns out to be one of my favorite releases of the new year. The band is Helgamite, the album is Hypnagogia, and it’s brilliant.

Sometimes a short genre description tells you all you need to know about a band, but not here. Helgamite call their music “Dark psychedelic Appalachian stoner doom”, and I guess that’s fair enough as far as it goes, but it really doesn’t go nearly far enough.

That phrase might make you think you’re in for not much more than a dose of primitive fuzzy riffs shrouded in Sabbathian gloom and a scattering of trippy guitar solos — you know, the kind of thing that’s been done to death but never seems to die. And… you would be dead wrong. 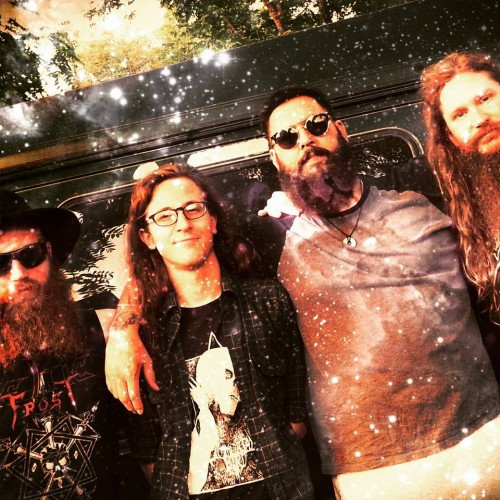 It’s not a completely misleading description. There’s certainly enough abrasion and meanness in William Breeden’s throaty, grit-caked yowls and crazed yells to make you think of a backwoods roadhouse after midnight, where the phlegm and blood mix with sawdust on the floor, and Helgamite do indeed have a knack for turning out primal grooves that any normal human is powerless to resist. But weed is incapable of doing to your mind what this music does, and there’s really nothing primitive about it at all.

When you upload an album to Bandcamp, it will play from the first track to the last one if you don’t mess with it, but you can configure the stream to start with any track if you want to. I’m sure you’ve seen albums where the first track set to stream isn’t the opening song. That’s what Helgamite did. They picked the sixth track on the album — “Shaman’s Veil” — as the first one to stream.

I’ve often wondered why a band would consciously put their songs in a certain order on their album but then set their Bandcamp stream to play in a different order. In Helgamite’s case, I’m fantasizing that it was an admissions test. Because the song they start with will weed out the less adventurous consumers of metal like a jumbo canister of Round-Up.

In “Shaman’s Veil”, the lead instruments are the bass and a tenor saxophone; the squalling guitar is there mainly to add an extra layer of derangement. The bass gets pretty funky at times, but also surges like an animated pulse, and after blurting in bursts, the sax takes off like a jet plane. As I listened, I could feel my neurons coming un-stuck, and the raw ends being spliced in different configurations. The song is also an introduction to Jonah Butler’s drumming talents, which just become all the more phenomenal through the balance of the album.

It’s a risky maneuver putting this song first in the stream, because it’s the most “challenging” song on the album — the one where the band’s jazzier elements are most up-front. At the same time, if you’re intrigued by this start, you’re going to eat up the rest of the songs like a hog at the trough.

If you just keep going with the Bandcamp stream, you’ll become immersed in the 14-minute closing track, “The Secret”, which happens to be my favorite part of this stunning album. Launched by a wobbly guitar arpeggio, a thudding bass line, and electronically altered vocals, it erupts in a spirited burst of tumbling drums, a whirlwind of tremolo’d guitar, and bounding bass. At about the 4:00 mark, the song moves into a punchy riff that will get heads moving, joined by a psychoactive guitar lead.

About mid-way through, the pace slows and the song turns into a doom lurch with a squalling guitar over the top, and more great drum work. And from there to the end, it’s a long, trippy jam, with the guitar (and maybe the sax?) creating a non-stop wave of searing acid over a repeating loop of drum, bass, and a heavy, head-nodding riff, punctured by some crazed growls. I promise, this back half of the song will get stuck in your head at the same time as it tries to take it apart.

“The Secret” really gives you the secret to Helgamite’s magic. It reveals the impressive technical talents and inventiveness of all the performers — with bassist Matthew Beahm and drummer Jonah Butler shining again — and it reveals the real star among stars, Casey Firkin.

If you loop back to the beginning of the album and keep going straight through to “Shaman’s Veil”, you’ll see that while Beahm and Butler‘s rhythm partnership is always seizing your attention, they will eventually lock into a groove, putting an asphalt-splitting spike into the ground to provide an anchor point for what Casey Firkin does with his guitar and sax.

Yeah, he can deal out the fuzzy stoner riffs, but the real magic he gives this album is in his Pink Floydian lead-guitar machinations and the cosmic contortions he generates through his sax. If you had a dollar for all the electronic effects he uses with his guitar, you’d be a wealthy metalhead — and they’re all so ingeniously employed (on top of his extravagant technical skill) that if this music makes any connection with you at all, there is absolutely no chance of you drifting away, even during the longest jams on this album.

I’ll admit that as much as I love Hypnagogia, it’s not going to appeal to everyone. But it mixes lumbering stomps, dizzying acrobatics, and bouts of hallucinatory derangement with amazing flair. It strides the earth like a titan, but its head really is way up in the stars.

Hypnagogia was recorded by Trey Richards at Summit Sound Studio in Eagle Rock, VA, and it was released earlier this month by Lost Apparitions Records. It’s available on CD here or for digital download on Bandcamp.