With their 2014 debut album Deprived, Montréal’s Phobocosm demonstrated a dawning talent for generating a poisonous, pitch-black atmosphere of dread, pain, and imminent destruction. With their new album, Bringer of Doubt, they have honed that talent, creating music that if anything is even more thoroughly and oppressively saturated with darkness and doom, yet is also even more memorable.

As before, the band have created death metal that’s leavened with elements of doom and dissonant black metal, and the resulting music is unerringly and unceasingly bleak and predatory. The opening track, “Engulfing Dust”, exemplifies the new album’s more prominent use of horrifying doom. It’s a staggering funereal lament that’s cold, desolate, and crushing. The song begins and ends with the sound of wind, rain, and finally distant thunder, and the melody first heard in the slow, sad chords at the start becomes a paean to pain. 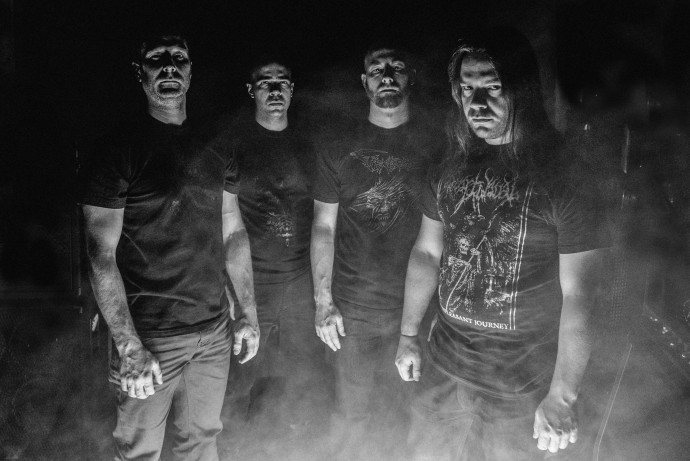 The album reflects a balanced production. There’s a coating of distortion in the sludgy riffs and the bass, but more clarity than murkiness in the overall sound. Yet as this first song proves, Phobocosm don’t need a lot of murk and mud to deliver thoroughly crushing and malign music. There are bursts of tremolo whirring and double-bass munitions, but “Engulfing Dust” is more devoted to generating an atmosphere of soul-destroying darkness and despair — an objective that’s helped immensely by Etienne Bayard’s terrifyingly chasmic roars.

“Tidal Scourge” is a more ferocious affair, with the drummer breaking out the blast-beats and the guitarists relying to a great extent on the writhing, morbid sound of tremolo vibrations. The music builds to a frenzy that’s heartless and cruel, with Bayard’s voice also rising up from its usual abyssal timbre to something that resembles a Johan Hegg battle howl. But even during this mounting ferocity, huge groaning chords segment the assault, and eventually the frenzy subsides, giving way to a slow, sinuous guitar melody that’s menacing and ghoulish, accompanied by huge, booming drumbeats and earth-shaking riffs.

The third of the album’s four songs, “Ordeal”, is the shortest at between 5 1/2 and 6 minutes. It alternately rips and tears like a beast and methodically pounds its listeners into dust, with a dissonant lead guitar melody that moans like a wraith — and then vibrates like a bone saw. It’s a chilling and unearthly song, and like all four of these tracks, it also gets its hooks into your head.

For the final track, “Fallen”, Phobocosm deliver a nearly 12-minute monster. The song’s opening segment is a mounting paroxysm of violence, a storm of grinding riffs and double-bass thunder pierced by a shrill, deranged lead guitar and more of those anguished howls. There are breaks in the storming, filled by pitiless hammering and grinding bass tones, as well the demented burbling of the guitar over a pulsing rhythm. Eventually, the band move all the way into staggering, stomping doom territory, with a dismal, moaning guitar melody that flows like congealing blood across a sub-zero tundra.

Phobocosm continue to chart a course that’s off a lot of the more well-beaten death metal paths. Though the musicians are obviously quite capable, they’re not interested in trying to drop jaws with a lot of technical acrobatics. Though their music includes explosions of barbarity, they pick those moments carefully and really don’t have the usual tornado-in-a-sewer sound of most blackened death metal bands when they do cut loose. You can hear the Incantation in their sound, but you can’t call this Incantation worship music. You’ll be tempted to brand parts of these songs death/doom, but it’s not in the same neighborhood as an Autopsy or an Esoteric.

Though it may be difficult to put a signpost on the winding path that Phobocosm have charted through and around the great beacons of slaughter mentioned above, one thing that’s easy to do is to proclaim this an excellent album that all fans of malignant, staggering, ultra-dark death metal owe it to themselves to hear.

As was true of Deprived, Bringer of Drought was mixed and mastered by the formidable Colin Marston. It will be released on May 13 by the formidable Dark Descent Records, on vinyl, CD, and as a digital download.

This is a rare occasion when we have no music from the album to accompany our review. But Phobocosm will be embarking on their first US tour in May (details here) along with fellow stunning Canadian death-bringers Mitochondrion and Auroch, which will culminate with their appearance at Maryland Deathfest 2016. I trust that between now and then, we will have an opportunity to share some of the music with you.

5 Responses to “PHOBOCOSM: “BRINGER OF DROUGHT””