Tons of metal bands have mined the works of J.R.R. Tolkien for everything from band names to album and song titles and lyrics. Few have excavated his writing as extensively as Austria’s Summoning, in part because the band have been plying their trade for such a long time. Since their formation in 1993, Summoning have produced seven albums (the last of which was 2013’s Old Mornings Dawn), three EPs, and an assortment of early demos and splits.

Summoning are probably best known for creating an epic, atmospheric, synth-heavy sound that captures the mythic, heroic sagas that have often inspired them and that have been reflected in their lyrics. But the album I’ve chosen for this Sunday’s look back at metal’s past — 1999’s Stronghold — is the first one in which the lyrics were not all derived from Tolkien (according to this source), and it’s often referred to as one that marked a change in the band’s sound, one that even Summoning have described (here) as “much more guitar orientated with more compact keyboard-melodies”. And this further statement about Stronghold appears on the band’s official site: 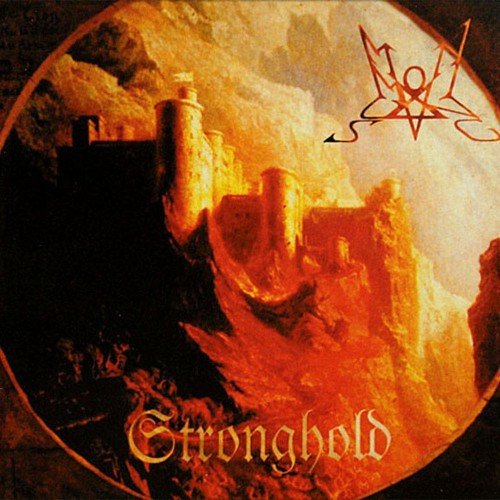 “So Stronghold maybe could be seen as the most ‘commercial’ album of the band. For the first time female vocals have been used (done by ‘Tania B‘ from ‘Die Verbannten Kinder Evas‘). On this release Summoning went on to experiment with spoken word samples; in this case from the movie Braveheart again and Legend.

“What many people didn’t recognize is that the intro melodie is the same one as the outro, but pitched down a few notes and manipulated a bit.”

Speaking of the intro, the first track “Rhûn” (the Elvish word for “east”) is what motivated me to select this album for today’s Rearview Mirror installment. A friend of mine from overseas remarked to me on Facebook yesterday about this track: “Whenever I hear an intro of a black metal band, I always think of this one, can it get better?” And it is indeed a great beginning — followed by a real grabber in “Long Lost To Where No Pathway Goes”. But this whole, dark, more riff-centric album is wonderful. Here’s the track list with time counts for the album stream below:

4 Responses to “THE REARVIEW MIRROR (SUMMONING)”