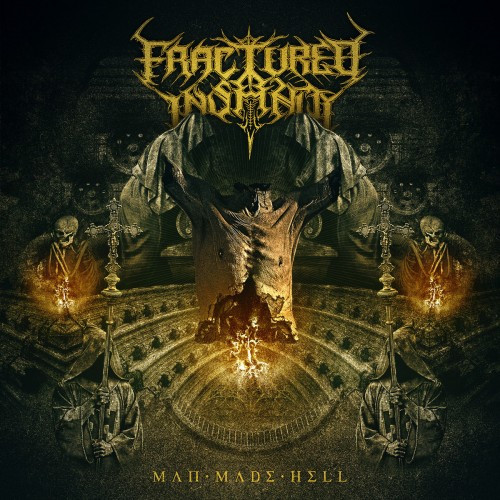 Have you ever wanted to strap yourself to the nose of a jet fighter and then have the pilot fly you into a hurricane? How about wanting to crawl under a pile-driving machine and let it punch your body into a fragmented pile of goo and bone? Or wishing that you could dive right into a school of frenzied, feeding piranha and commune with them in their single-minded bloodlust? Yeah, of course, everyone would love to do these things. But how often do we get the chance?

Well, if you don’t know any fighter pilots or have ready access to a construction site or live near the Amazon, you can still very easily listen to Man Made Hell, the new album by Belgium’s Fractured Insanity. In fact you can listen to it right now because we’re premiering a full stream. 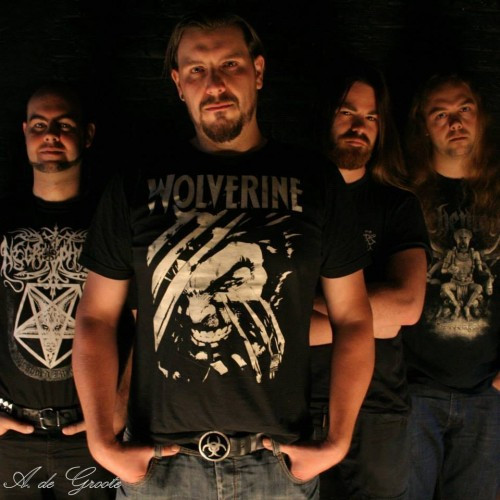 Five and a half years have passed since these barbarians last released an album, but holy hell, whatever happened to them during those years was all to the good, because Man Made Hell kicks massive amounts of ass. It’s a well-oiled, machine-precise amalgam of merciless death metal brutality, eye-watering technical flash, and seductive, sinuous melody. When the band are flying in the red zone, you get an electrifying torrent of swarming riffs and machine-gun percussion shrouded in an atmosphere of ominous, predatory menace. But the music is dynamic, and the band are just as adept at easing off the throttle and inflicting the kind of decimating, heavy-grooved punishment that brings to mind a demolition zone.

Despite the fact that Fractured Insanity’s style of music leans hard toward the brutal end of the death metal scale, they haven’t forgotten the importance of melody and memorability in their songcraft and they are obviously quite aware of the potential for non-stop speed and explosive technical munitions to become exhausting, because they do vary the speed and volume, as well as threading the songs with traceries of melody that catch in your head. The title track itself is a fine example of what I’m trying to describe, but it’s not the only one.

And on top of all this ear-pleasing musical extremity, the vocals are beastly — as in the growls, howls, and savagery of a large, pissed-off carnivorous animal who’s just escaped a cage.

Man Made Hell will be released tomorrow — April 15 — by Dave Rotten’s Xtreem Music. The label describes the music with reference to such bands as Kronos, Hour of Penance, Nile, Immolation, and early Decapitation, and those are useful comparisons. If you’re a fan of any of those bands, you definitely need to hear Man Made Hell. Do that next.

To pre-order the album in digital form, go here: