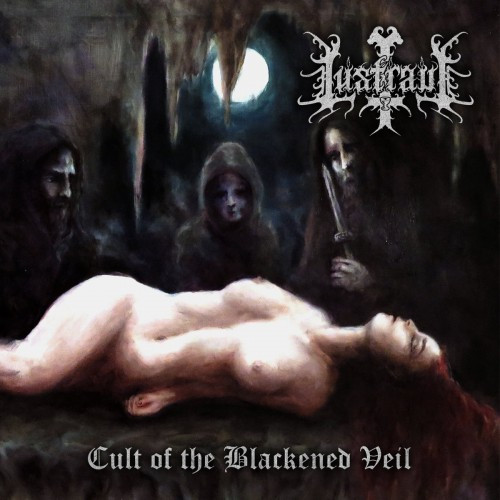 The sun-drenched shores of Panama City in Florida’s Bible-thumping panhandle may seem like an unlikely spawning ground for a knife-wielding black metal band like the one menacing that prostrate nude up there, but that’s the place Lustravi call home. Their debut album, due for release by Obscure Musick in early May, is named Cult of the Blackened Veil, and we bring you a taste of what it holds in store through our premiere of “Evil Incarnate“.

The song certainly claims kinship with a particular flavor of black, satanic Scandinavian savagery, but the path it carves draws upon other other musical traditions as well.

“Evil Incarnate” begins with a kind of prelude — a heavy, mid-paced march that buzzes with poisonous threat while the vocalist shrieks her proclamations in a voice like boiling acid. The bleak, heavy undercurrent of the opening persists as the music intensifies and introduces a rising and falling radioactive melody that surfaces again and again as the song evolves.

The band spin out variations on the theme, while varying the pace and incorporating bursts of pummeling ferocity, yet that very appealing melodic riff, like a serenade to a den of cobras, is what really gets stuck in the head. And so while the band do indeed convey a sense of grim and malignant barbarity, there is also (at least to these ears) a kind of forlorn and entrancing beauty in that melody, and it makes for an interesting contrast.

Cult of the Blackened Veil will be released on May 6. You can pre-order it from Obscure Musick HERE, or on Bandcamp via the link below. After our stream of the new song, you can also partake of another, previously released, track from the album named “O, Sanctifier”.