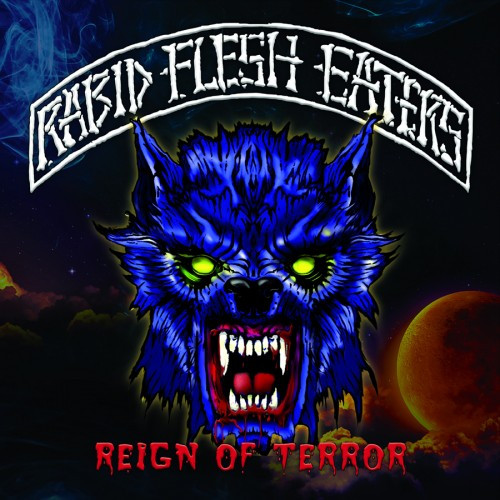 Reign of Terror is the kind of classic barrage of electrifying sound that ought to put a big goofy smile on the faces of all heavy metal fans. And although it’s the debut release by Rabid Flesh Eaters (from Arlington, Texas), it’s clearly the product of people who’ve got metal in their veins instead of blood and a deep knowledge, experience, and affection for full-throttle mayhem. You’ll have a chance to hear what I mean through our premiere stream of the whole album — which is being released today.

On this date five years ago, the late Mike Scaccia (of Rigor Mortis and Ministry fame) agreed to record the album, and he also contributed a scintillating solo on its opening track, “Lycanthrope”. The production quality will be one of the first things you notice about the album — the sound is so powerful, so sharp, and so immediate that it’s as if you’re right inside a room with the band — a room whose walls are being blasted outward by the explosiveness of the sound. And although Scaccia‘s solo is a thing of beauty, there are white-hot solos salted all the way through the album that will make you want to raise your clawed hands to the sky (check out the one in “B.T.K.”, for example, if you want to really get bug-eyed by the shred). 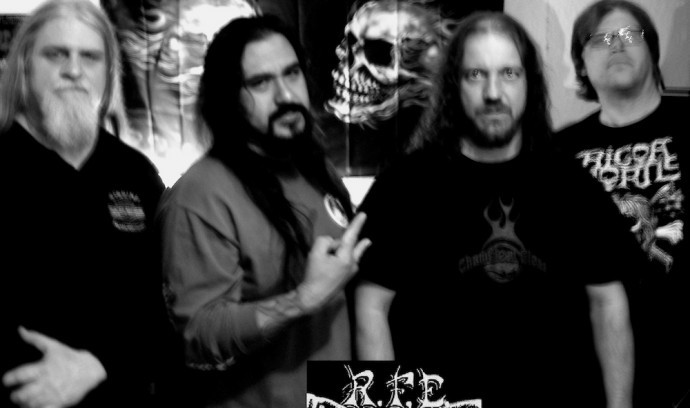 Reign of Terror is a fleet, furious, high-voltage charge of thrash and speed metal, with venom coursing through its blood-stream and plenty of viciously barbed hooks in every song. But the music also includes skull-smashing grooves, along with some punk and industrial flavors as well. It’s a non-stop thrill ride through a demolition zone that will batter you black and blue but leave your bruised face grinning and your heart beating like it’s just been punctured with a needle full of adrenaline.

Part super-heated frenzy and part pile-driving groove monster, it’s Grade A headbang fuel. And to go along with a lot of obvious instrumental skill, the vocals are also hell on wheels, displaying a lot of variety and passion — from raw yells to hair-raising screams, from lycanthropic growls and howls to punk snarls. And the vocalist can turn on a dime (check out the high yells that rise up immediately from the throaty growls in “Industry Killers” as an example).

I’m afraid I’m in a state of ignorance about the musical pedigrees of the dudes in this band, but this clearly isn’t their first rodeo. You could figure that out even without seeing band photo up there — the skill and experience show, both in the quality of the songwriting and in the assurance of the performances. This is loads of evil fun, and I hope you dig it as much as I have.

Reign Of Terror will be self-released today. Look for it on Amazon and iTunes.

5 Responses to “AN NCS PREMIERE (AND A REVIEW): RABID FLESH EATERS — “REIGN OF TERROR””