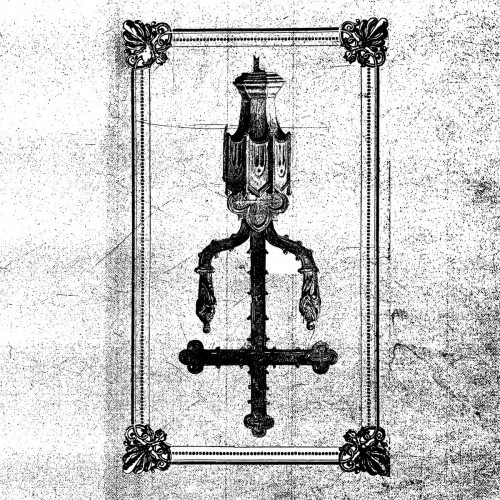 I think you’ll be forgiven if you get confused about the titles, because the songs on Form are “Forn” and “Fórn”. According to an Icelandic-English dictionary I consulted, “Forn” seems to mean “old”, while “fórn” appears to mean a “sacrifice” or “offering”.

The first of these tracks combines big, sludgy riffing and a high trilling melody, moving from slow hammering to frenzied rampaging, with agonized, throat-shredding vocals that hold nothing back (the drummer doesn’t seem to be holding anything back either). When Hauksson launches into power-metal-styled vocals near the end, the band take a sharp stylistic turn as well for a surprising but electrifying finish

After a brief sample, “Fórn” explodes right away in a tornado of riffs and machine-gun drumming, the truly intense vocals amplifying the surging urgency of the music. As the pace slows briefly, the band use the occasion to just dig their hooks harder into your head before kicking the intensity of the music into the red zone with a riveting, racing lead-guitar flurry.

Form is being released on tape, and a 7″ should be released by Psychedelic Lotus Order/goatowarex later this year — but you can have it for a price you name at Bandcamp right now: 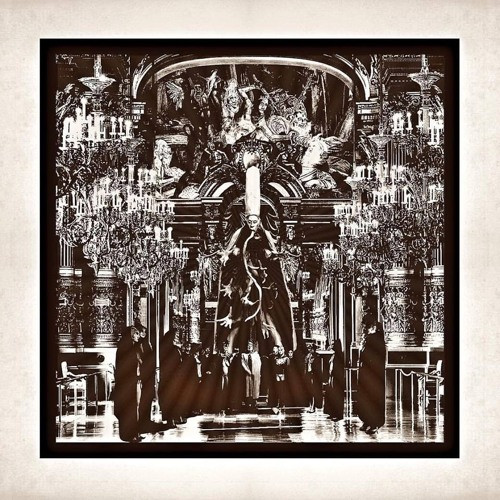 The second of the Icelandic bands with which I’ve started this collection is Svartidauði. I presume they need no introduction to lurkers at our site. Within the last week Terratur Possessions released a 7″ EP by the band named Hideous Silhouettes of Lynched Gods. Although the release is new, the two songs on it — “Hellish Visions” and “Deathtrip” — were recorded in 2010.

In one sense, this is an interesting historical artifact from this band’s earlier days, but make no mistake, the music in no way feels like novice work. “Deathtrip” is intensely gripping, both violent and entrancing, with a mystical serpentine melody moving slowly through the barrage of attacking drums and the deep thrum of the bass. The song’s eerie, haunting conclusion is also a perfect ending to this storm of anguish and rage.

“Hellish Visions” is, if anything, even more unearthly in its atmosphere, even more perilous and bestial in its alien emanations. But for all its buzzing and battering, the song is also mind-bending and hallucinatory — an intricate, creative, and disturbing excursion into foreign dimensions.  (Extremely cool drum performance, too.)

Below you can check out a Soundcloud stream of “Deathtrip”. The only streaming version of “Hellish Visions” I could find is a live video posted in 2010. 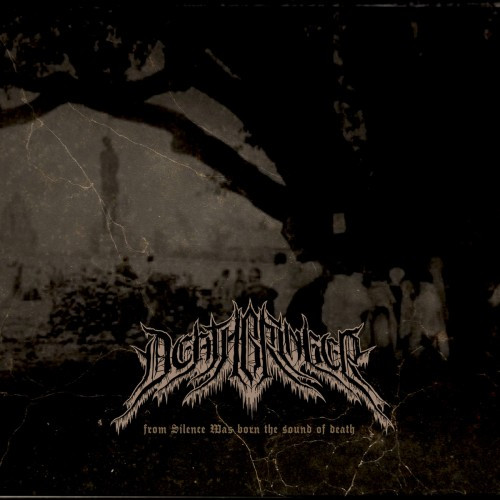 I thank my friend “M” for linking me to this next song, and to the balance of the music in this post as well (among many other recent suggestions). “Bourreau des Martyrs” is a single released on Bandcamp by a new band from Montreal, Quebec, named Deathbringer. The artwork for the single bears the legend, “from Silence Was Born the sound of death“, but I don’t know if that’s the title to an EP or album that will include this single or is simply the band’s statement of philosophy. I haven’t discovered any other info about the band, but “Bourreau des Martyrs” is a very promising debut.

The music is murky, morbid, and malevolent, with vocals that span the range from horrifically cavernous roars to excruciating shrieks, and the band interweave passages of torrential turmoil with slow, cataclysmic doom detonations — while anchoring this dynamic piece with the kind of lethal riffs that will get your head moving. 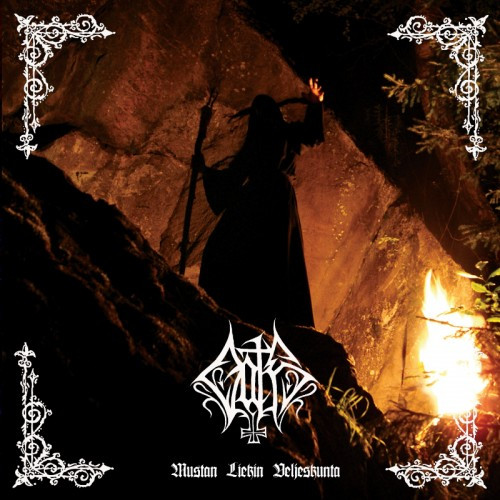 The next song, “Amen Apollymi”, was released about 10 days ago and it comes from the forthcoming second album, Mustan Liekin Veljeskunta, by the Finnish band Oath.

This is my first encounter with Oath’s music, and I got sold on it very damned quickly — as in the first seconds. The song has a stately, mid-paced tempo, even when the drummer launches bursts of double-bass, and the combination of sweeping, tidal melodic passages with burly, head-punching riffs works really well. There’s an epic, mythic quality to the anthemic portions of the song, and the parts that sound like a march to battle are just as gripping. 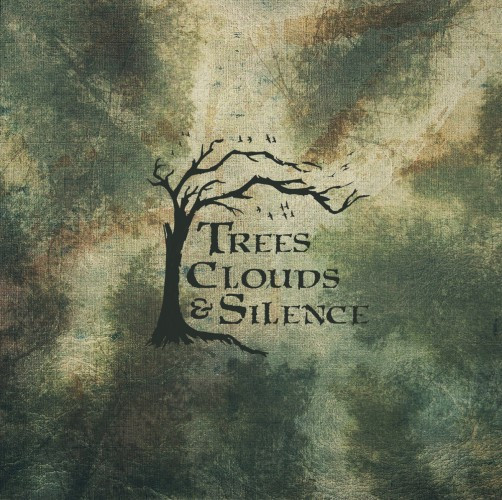 The next item in this collection is the self-titled debut album by a one-man band from Málaga, Spain, named Trees, Clouds & Silence. The creator, Ocram, says he is inspired by “the contemplation and admiration for the forest and mountains of the south of Spain, Andalusia,” his homeland.

The songs are a mix of beautiful, vibrant melodies that range in their emotional aura from the melancholy and wistful to the anguished and triumphant. It’s definitely a guitar-centric album, but Ocram also makes effective use of keyboards and high, clean, wordless vocals to intensify the soulful, mystical quality of the music created by the shimmering chords and reverberating arpeggios. While the music is often dreamlike and designed to evoke mental images of beautiful natural vistas, it also often surges and swirls with blood-pumping passion.

It’s rare to find a one-man band who is as capable on the bass and drums as on guitar, but you’ll find this is one of those rare occasions, and the clarity of the production allows you to appreciate all of Ocram‘s talents. The vocals on the album (which do include paint-stripping shrieks and wretched howls) are few and far between, but if you’re like me, it will keep you in thrall nonetheless. Especially for a debut recording, this is a very impressive and thoroughly engrossing blend of atmospheric black metal and post-rock.

The album is available digitally on Bandcamp, but a physical release is forthcoming this summer from Throats Productions. 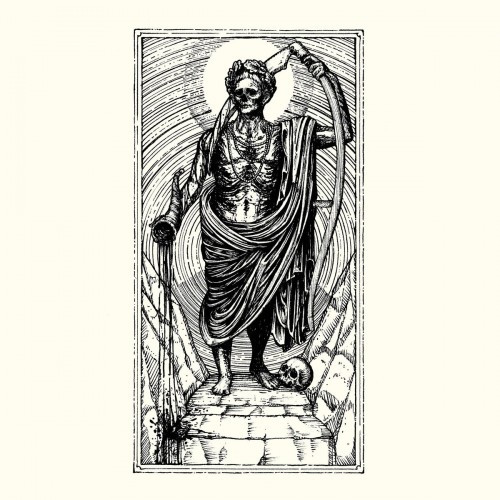 A few days ago this Dutch sludge/stoner band — which features current or former members of such groups as Dr Doom, Rush N Attack, Aborted, Omission, Urfaust, and The Devil’s Blood — posted two songs on Bandcamp from a forthcoming album (their third) named Fergean.

“All Is Lost” pretty much tells you what you need to know right in the title. It’s the kind of fuzz-bombed stomp that does its level best to hammer listeners to smithereens. The song is as grim as a suppurating corpse and as eerie as a risen wraith, with equally unnerving vocals, but it’s so infectious that you’ll have a hard time getting it out of your head.

“Grand Precipitations” is faster and more animated, but though it’s more of a rocker than “All Is Lost”, it does an effective job of ratcheting the tension with a needling, discordant riff and more of those deranged vocal excretions. It also lays the heavy lumber up-side your head. And yeah, it’s pretty fuckin’ catchy, too.

Fergean is being released on CD and LP by Reflections Records. Below is the Bandcamp stream as well as a video for “All Is Lost”.