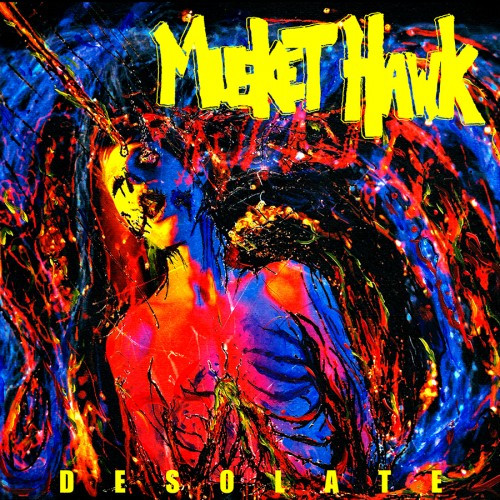 Every now and then, this question may cross the minds of metalheads with a certain bent in their listening (it even crosses what’s left of my mind on occasion): Why are we drawn to music that’s near-catastrophic in its ugliness and seems to revel in the abandonment of hope and the exaltation of violence? When music vividly catapults us into a war zone where everything is falling apart, why don’t we want to leave?

Well, don’t look at me for answers. I’ve only got questions. I’m thinking about those questions because I’ve been listening to Desolate, the aptly named new album by Baltimore’s Musket Hawk. It includes eight tracks from which mercy, remorse, and all vestiges of human kindness have been banished. Sanity doesn’t seem to be welcome either. But you travel these mean streets, and you’ll also perversely feel vibrantly alive.

This may not make sense, but maybe you’ll soon see what I mean, because a full stream of Desolate waits for you at the end of this post. 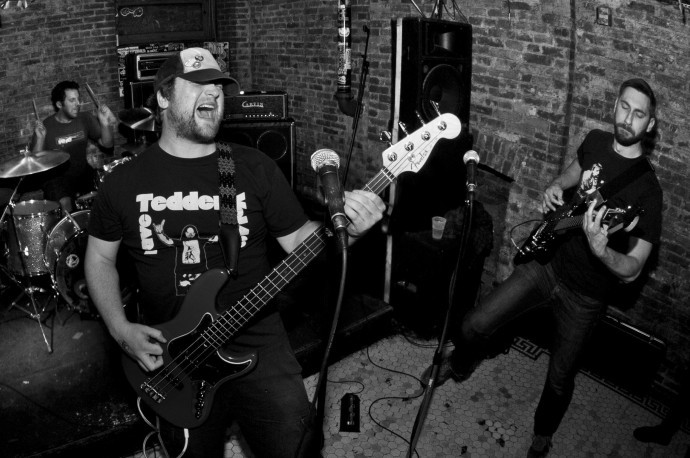 Musket Hawk are a trio, but that’s all the manpower they need to wreck havoc with abandon. From the first seconds of squalling feedback and unhinged barbarity that launches “Pollute Your Throat” straight through to the staggering grimness and romping gallop that share time in “Candidate For the Knife”, Desolate will batter your head senseless and keep you so off-balance that hugging the floor may be your best option.

Sometimes it feels like someone slipped a narcotic in your beer. Sometimes it feels like someone just jammed a spike in your heart and gave you a big bolus of adrenaline. Sometimes, you get the sense that you’re being hit in the neck with a crowbar. It’s a hell of a genre-bending ride — part sludge, part grind, part stoner, part wrecking ball, part homemade explosive device filled with nails that’s just gone off in your face. I think you’ll like it.

Desolate was produced by the band and mastered by Dan Randall (Ghoul, Annihilation Time, Impaled). It will be released on May 6th by Baltimore-based Unholy Anarchy Records in cooperation with Australia’s Goodtimes Records.

Beginning later this month, Musket Hawk will spend a week and a half destroying these cities along with their comrades in Australia’s Disparo! (with whom they’ll be releasing a split later this year) in the appropriately named Desolate Road Spring 2016 Tour:

For more info about Musket Hawk and how to snag this album, visit these links: