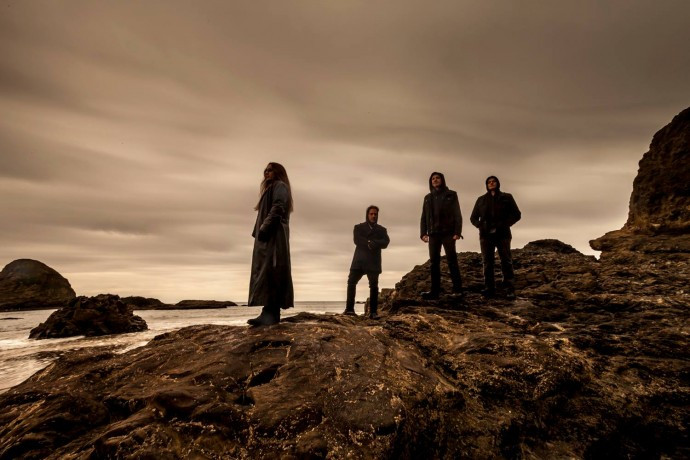 As if I didn’t have enough to be depressed about, my friend Joseph Schafer from Invisible Oranges just alerted me to the thoroughly depressing news that Agalloch has broken up. Here’s the message that just appeared on their Facebook page:

Following 20 years, 5 full length albums, many tours around the world, and numerous other recordings, John Haughm and the rest of the band (Don Anderson, Jason Walton, and Aesop Dekker) have parted ways. What the future holds for the separate parties remains undetermined. We collectively thank all of our fans across the world. There are also way too many other people to thank who made this band possible. You know who you are.

I have immensely enjoyed this band’s albums, and the four live Agalloch shows I’ve witnessed have stunned me — every one of them. Of course, they don’t owe us fans any obligation to continue recording and performing, but it’s still a sad day.

They leave behind a legacy of music that not only made a deep and lasting impression in its own right but that also proved to be tremendously influential on the evolution of black metal in the U.S. and around the world.

We don’t need a crystal ball to know that these four talented people will continue to make music on their own or with other projects (as they have already done), and perhaps Haughm himself or Anderson, Walton, and Dekker together will forge ahead in some new incarnation of the band, but none of that lessens the impact of realizing that Agalloch as it was is no more.

After being inundated by a barrage of responses, I feel that I should clarify some things. I take full responsibility for the decision to part ways with the other guys. It was difficult, well thought-out, and something that had been culminating over the past couple of years. I simply could not continue any further with the band as it was. I had to make a change as my motivation and inspiration had started to completely deteriorate. Whether this is the permanent end of Agalloch altogether or a possible fresh start, I don’t know. I probably won’t know for awhile. The band has simply been reduced back to its founding, visionary member for the first time in 20 years. Beyond that, the future is unknown.

Usually statements like these open with expressions of gratitude for the fans, friends, colleagues, and people we’ve worked with. There is a sort of form to the break-up letter that long-running bands produce: “thanks everyone that has supported us over the years, bought our records, came to our shows,” and so forth. Then the apologies arrive from fans, friends, and family members: “we’re so sorry to hear this. We hope you are ok.” But, I can’t start like that—it seems too mechanical. I can’t start that way because it is I who should apologize to all of you.

I am sorry you won’t ever hear new music from Agalloch. I am sorry our fans in Latin America, China, Russia, Japan, Australia, will never see us play. I’m sorry I won’t personally meet many of you after a show and talk about music, movies, school, and share a shot of bourbon. I’m really, really sorry because I had every intention of continuing.

This was not my decision.
I did not want this.
I still maintain it was not necessary.

I’m sorry it had to be this way. I am personally devastated and have not felt this level of grief since my father passed away ten years ago. So, if you are sad, upset, pissed, or bitter—I share these feelings with you. I know Agalloch deeply touched a lot of people. And I honor that by grieving in solidarity with all of you. Agalloch was an incalculable part of my identity and I’ll be walking as half a man for some time now.

I want to thank many people. I am terrified of forgetting anyone as my mind isn’t all that clear today. So, for now, I really want to thank the fans from the bottom of my heart. My favorite activity was meeting all of you after a gig, or before a gig. The spiritual connection you and I shared during a show was the closest I, an atheist, have ever felt to God. Thank you, thank you, thank you.

You might think our music helped you through the dark times in your lives, but all along you were helping me avoid the darkness.

And Jason Walton also  left this message on his FB page:

I have been flooded with messages. I appreciate it and apologize for my short responses. I am simply overwhelmed by the love and the situation at hand. 20 years.

I did not want this. This was not my decision.

26 Responses to “THE END OF AGALLOCH”