Over the last couple of months one of the musicians in the excellent Dutch black metal band Kaeck has been turning me on to underground releases from the distant past that I’d never heard (or heard of) before. His own roots in the black metal scene go back decades — far longer than my own — and I’ve realized how much I still have to learn. I’ve already devoted several of these Rearview Mirror posts to bands he has recommended, and this is another one.

The focus of this post is a Swedish band named Niden Div. 187, and specifically the only full-length album they ever released, 1997’s Impergium. 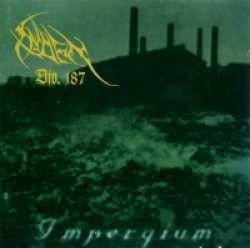 According to this interview of Forss, the number 187 in the band’s name refers to the American police code for murder, while Niden was “just a name, like my name or your name”, that he intended to remove from the band’s name in the future — except the band never recorded anything else after Impergium (and only one EP before releasing that lone album).

Much of the time, Impergium is raw, rancid, and as warlike as the lyrical themes. When operating at full speed, it’s ridiculously fast. Petersson’s drumming (mainly a scathing blast-beat attack, punctuated by booming progressions or bursts of double-bass) is jaw-dropping. The guitars are a racing haze of high-pitched tremolo riffs and head-spinning leads. The vocals of Forss are high, vile, and wrenchingly abrasive. There’s an audible bass in the mix, nimbly bounding about like a crazy man in the shadows.

Yet even when moving in the red zone, bleak and even despairing melodies move seductively through the chaos. And every now and then, the band pull their feet from the accelerator and lurch into a funereal slog that underlines the pervasive presence of death in this frenzied musical pageant.

To me, this is far more than a historical artifact. As a product of 1997, it seems it was ahead of its time. In the context of 2016, it’s still a riveting listen. The songs are short (close to grindcore length); the whole album is only about 26 minutes long; give it a few minutes and find out if you’ll be pulled into the whirlpool as I was.