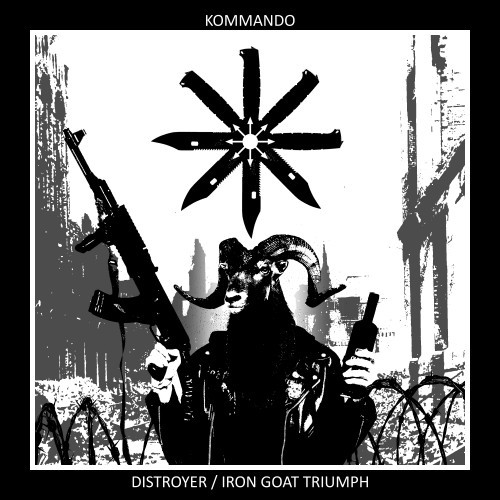 I imagine that when I discovered the existence of this album it was like being a wolf with an intriguing scent in his nostrils. I saw this new band name, and then I saw the pedigree of its members. It made my ears go up, figuratively speaking (if only humans could actually raise their ears like spikes to the sky!). And then the music made me feel like a wolf on the hunt, too.

This band, Kommando, includes members of the German black metal juggernauts Dysangelium and Endstille, but spinning their talents in a very different direction — one that makes you lope after them in a rabid gallop, tongue out and eyes wide and red.

I’m not sure I can name all the buttons this album pushes in my head, but I can damned well try. It’s the least I can do, because it’s one of the best things I’ve heard this year. 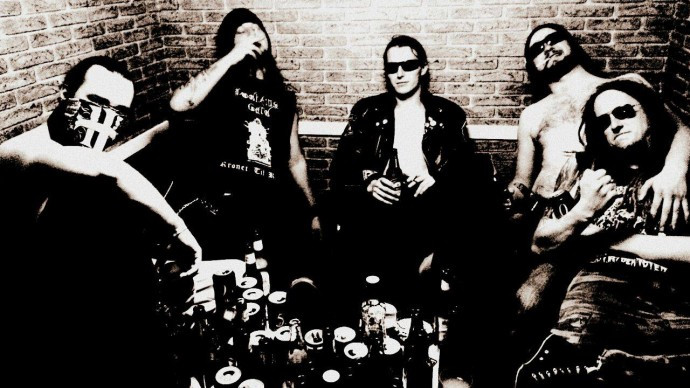 It won’t be for everyone. If you recoil at punk in your metal, you’ll shy away, like a horse in the path of a viper. If you embrace the connection (and really, you should), this will be a main-line adrenaline rush. Distroyer/Iron Goat Triumph hits like an iron fist and kicks ass with steel-toed boots. It would just as soon head-butt you as look at you.

So let me try to describe some of the other buttons this pushes.

There’s a raw, natural sound to this barrage, about as close to live mayhem as you can get in a recording without it being pulled from a soundboard at a club. When these songs are played live, I’d expect to see bodies flying as if being shelled in a mortar bombardment.

It’s absolutely vicious and virally infectious, moving between d-beat crust and hail-storming black chaos. It’s rabid and ripping, one turbocharged brawl after another, a boiling concoction of testosterone, alcohol, and blood-lusting fury.

The distorted riffs move like a short-throw shifter in a muscle car, punching up and down from slashing chords to whiplash barrages to head-stomping jackhammers. Half the time the guitarist(s) rake so fast the chords sound like they’re pulsating, or like high-speed, high-caliber anti-aircraft fire, with enough decimating power to turn concrete slabs into Swiss cheese. The wicked drumming and bubbling bass amplify the spleen-rupturing effect of the discharges.

And man, Sektarist 0’s vocals are a real trip — like roars from a throat filled with clotted blood and malignant tumors, something resembling a first cousin of both LG Petrov and Rob the Baron. You can make out the tyrannical lyrics, which makes it easier to lose your mind and howl along with them.

There’s no stopping this blitzkrieg. It’s a series of mainly short, sharp shocks delivered straight to the solar plexus, but with bursts of scalding heat and an overarching air of grim, remorselessly destructive violence.

The whole thing kills, but if you insist on just dipping your toes in these turbulent waters before diving all the way in, I’d recommend “IndoctriNation” and “Kommandojugend”. The first of these two is an explosive combine of whiplash riffs, swarming leads, stomping rhythms, and berserker vocals (including gang roars). The second may be the darkest and heaviest song on the album, and one of the most brutally ferocious. The melody is so grim it feels like a mortal wound.

One last piece of button-pushing: The song titles. They’re constructed with tongue in cheek, which is an idiom I hope can be understood beyond U.S. borders:

The name of the album is Distroyer/Iron Goat Triumph. It will be released on June 13, 2016. You can pre-order it via the first link below.

And, to get to the main point, you can also listen to a complete album stream after the links.

One Response to “AN NCS PREMIERE (AND A REVIEW): KOMMANDO — “DISTROYER / IRON GOAT TRIUMPH””