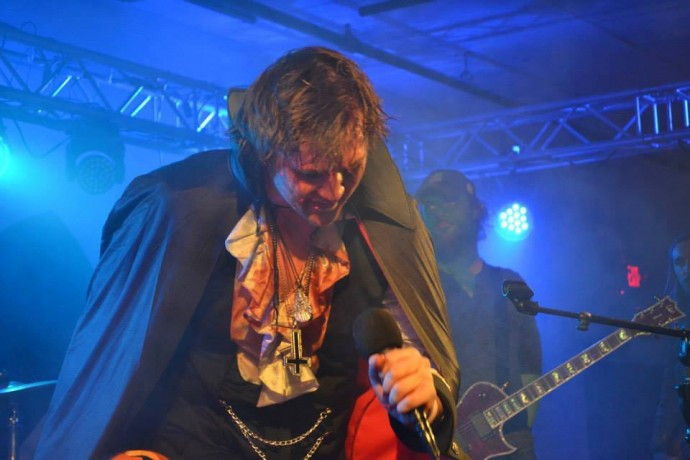 Merlin is alive despite all efforts of that shameless woman to get rid of him… He travels in time and is tightly hooked to the psychedelic era of the ‘70s. Now he has taken the form of a heavy psych-doom band and just manipulates four talented gents, inspiring them with hallucinogenic visions of madness and sin.

Merlin has existed in the form of a quartet since 2012 and works well – their third album Electric Children was released about two months ago and it shows a new verge of their skills. Who are they? What are they? The man who introduced himself as Merlin’s vocalist Jordan appeared in coils of smoke and gave a séance of psycho doom witchery. Jordan, show thyself!

Hi Jordan! How are you? What’s Merlin’s status now?

Hi, I am good. We just got done playing an amazing set with Dead Meadow in Kansas City, and are preparing for plenty of shows coming up this year. We welcomed a new bassist at the beginning of this year, Chase Thayer, who has been completely killing it with us… 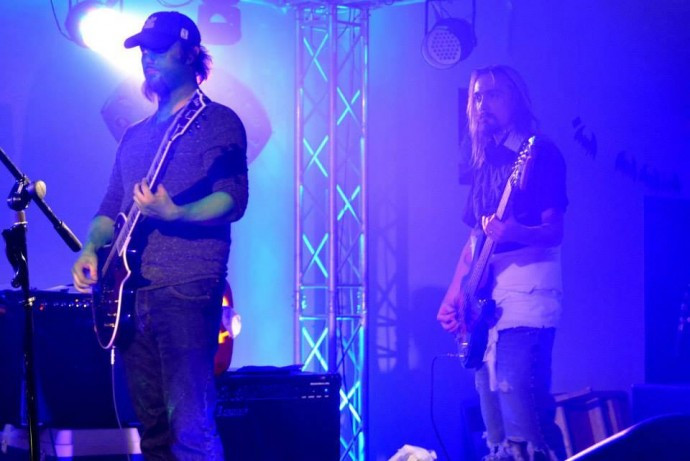 Does such a replacement affect the chemistry within the band?

Well Chase is our fourth bassist since 2012… With each bassist we encourage them to take our songs in their own way. For instance, Evan, our first, loved to jam, and our self-titled album and Christ Killer shows it, especially on our “Forever My Queen” cover. He loved playing fast and sporadically, and it certainly influenced how we all played.

Then we had Hughes, who added a very low, spacey bass tone to our songs as featured on Void. Joey then came in, and he provided seriously heavy, doomy grooves for all our songs… which I think is what made Electric Children a very different sounding record for us. He really did make us a much heavier band.

And now Chase’s era is upon us, and three shows in this year, it’s clear to us that he’s a very different but perfect fit for the future of Merlin.

There are four musicians in the band, how do you share roles? Do you have a genius mastermind in Merlin?

Carter tends to write the backbones for almost all of our songs with Caleb and I sculpting them along. Usually starting with a riff he came up with, and then Caleb and him work it out with jamming on it for a while, giving each of us time to brainstorm how to make it better. Lyrics start coming when we twist the jam into an actual song… Sometimes we discuss what kind of song we’re gonna play, and it just comes naturally. Other times we think we got a really good song, and the finished product is completely changed. We’re all the masterminds. 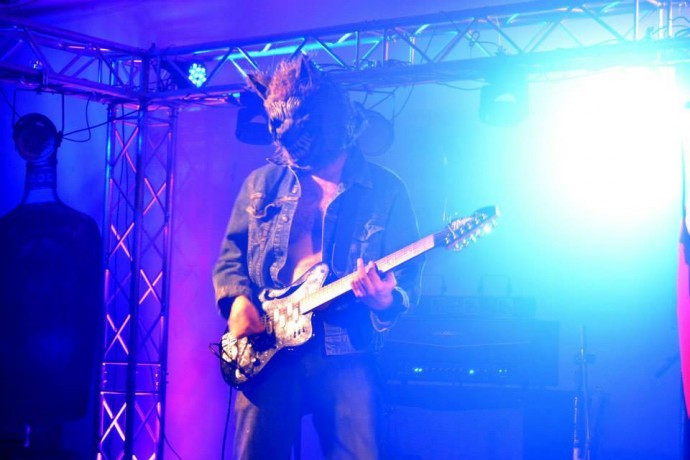 Your debut self-titled album was released in 2013, and the band has changed a lot in its core sound. How would you evaluate this evolution?

Getting bored… we never like staying in one genre or mindset too long.

We had been playing songs featured on the self-titled for about a year before it was recorded and at the time we thought they were the best songs we’d write; they all had this noisey, free-form hypnotic psychedelic vibe to them that we loved. It was fun music to play. And then we decided to change it up once it was released. We wanted to go heavier. So we added Ben as second guitar and proceeded to tackle a conceptual-type album, that became Christ Killer. Then we wanted to get away from the story albums, so we made Electric Children. Now we’re ready for something new.

Your second album is named Christ Killer – the title sounds pretty pretentious, what did you put into it?

The title stems from Nick Cave’s screenplay, “Gladiator II: Christ Killer”, which never was made into a movie, but we wanted to write an album based on it anyway.

What did you take from the original plot? And why didn’t you put the brutal head of Russell Crowe on the album?

In Caves’ screenplay, Maximus goes down to hell after the events of Gladiator and makes a deal with the Old Gods to kill Christ, who is causing them all to die in Heaven due to His rising popularity on Earth, and in exchange would get his freedom back.

In our version we have a man executed in the 1900s for killing his girlfriend and makes a deal with the Devil to go up to heaven and kill Christ and God so the Devil can take over heaven. But in the end he is tricked into oblivion. 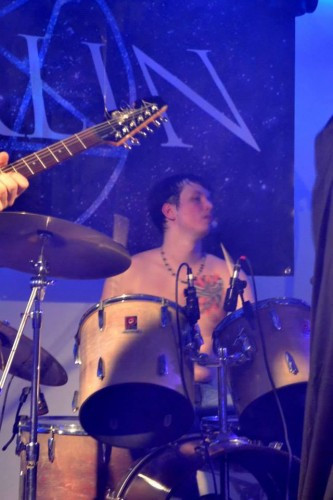 Drugs and Satan are common friends of a great number of psychedelic doom bands. What role do these things play in Merlin’s creative process?

Drugs are cool with us and Satan is cool, too.

Can Merlin exist without drugs or Satan?!

Yes. I think a lot of bands rely on using Satan and Satanic imagery to sell their product for being evil, and sell themselves short by calling their music “Stoner Rock”. Throw a Pentagram or a Baphomet on your images and you must be an evil and heavy band. Don’t get me wrong, I think the imagery is cool. But it doesn’t keep us afloat. Hail the Void.

I was listening to your new album Electric Children and some of your songs have great atmospheric arrangements which remind me of Goblin’s music to Argento movies or soundtracks for Carpenter films. What drove you when you poured out that psychedelic madness filling Merlin’s tracks? I guess that Electric Children is one of the most psychedelic records in your discography.

“Interlude”, a more Carpenter-inspired track, was made to be an intro for “Night Creep”, a song about a serial killer. It was a total skeezy VHS worship track. As for the other track, “A Reprisal For Julia”, we reprised a “Merlin Rising” song from 2012 and soaked it with Philip Glass worship. 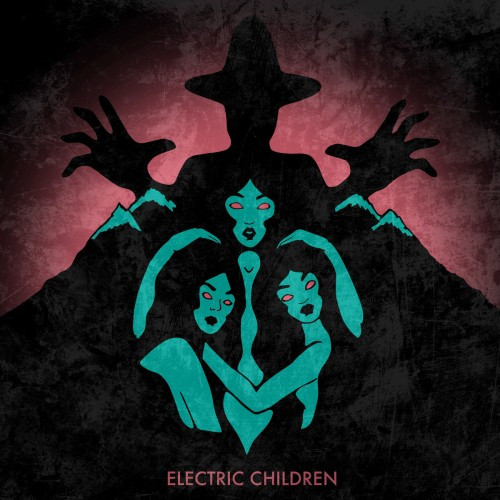 By the way, what is the story behind the “Electric Children” song? What’s it about?

Metaphorical Android Children brainwashed by the Cult of the Electric Children to believe the only way to salvation is by killing everyone they used to love.

Merlin were planning to compose a soundtrack for some movie. How does it go? Can you already tell us the movie’s title?

Still are. But we can’t tell you any more. All we can say is it will be monolithic and bigger than anything we’ve ever done.

But at least tell us if it will be a classic soundtrack theme or a collection of rock tracks united with one idea?

Think “More” or “Obscured by Clouds” and you’re close.

I heard that you planned to release Electric Children as a double album. What was the reason why you didn’t fulfill that plan?

The album itself was never a double album but we did want to have two LPs, mostly because we wanted to have “Tales of the Wasteland” occupy one whole side. Poisoned Mind Records wanted to do it too. Really badly. But it wasn’t in the cards just yet. Instead we went back into the studio and mixed it to be a special single LP version of the album, which will be the only way to hear this special mix. A vinyl exclusive mix. But don’t worry. We will put out the Zack Synder Ultimate Directors Cut version soon enough.

At least Megan Fox on vocals. And with the Black Freighter cut in between the album.

One part of the Electric Children songs is united with some conception — what is it about?

There’s the “Tales of the Wasteland” song, which is a 23-minute-long hazy trip. How did you grow it so huge?

We wanted it to be that big. It was always going to be our “Echoes”. We didn’t know how it was going to sound like or what we were going to call it. But we wanted to end the album with a 20-minute, four-part song. It turned out pretty well.

Do you play it at gigs? What kind of set list do you prefer?

We’ve only played it once in its entirety live and it was at KC Psych Fest last year, at like midnight, and everyone went to smoke on the Patio during it. But the sound guy thought it was cool.

We love having all kinds of set lists. As I shared above, with each bassist our sound changes and we always love revisiting really early tracks with a different approach and throwing a cover in there. Here’s the most recent set we played:

How often do you play and how many States have you already visited with Merlin?

About twice a month. So far we’ve played Oklahoma, Missouri, and Kansas. But we are playing a show in Indiana for Doomed and Stoned’s first festival.

You’re from Kansas City, Missouri; how do your surroundings influence you?

Three albums is a good count. Can you say that you have finally found the proper sound of Merlin on Electric Children?

No. I don’t think we ever will. Just enjoy the ride(trip).

The old and good Merlin was ruined by a woman. What roles do women play in your songs?

They give us the best Lake swords.