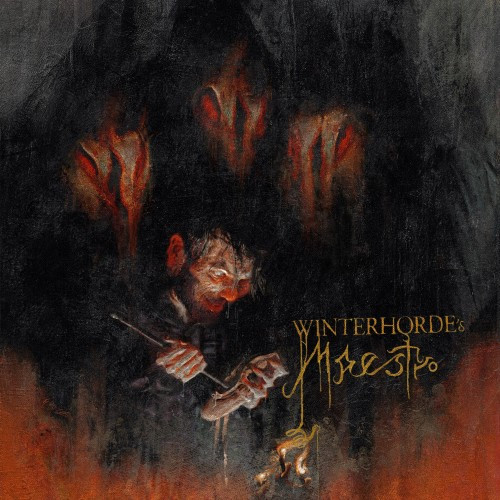 (DGR reviews the new album by the Israeli band Winterhorde.)

In what has become a calling card, Winterhorde are a band for whom significant time has passed between the last two releases. Three years plus tends to be the point at which questions start arising about the band’s status, and when you start coming up on the front-end of six years as in the case of Winterhorde, you start to worry whether the band even still exist. The gap between the releases prior to the six-year breather was closer to four, so even by their standards the length of time between discs was reaching an extreme.

Maestro, the group’s most recent release, follows the group’s 2010 album Underwatermoon — a densely packed album that, while it had some faults in terms of running a little long in the tooth, had its fair share of interesting ideas and regional melodies that gave the whole album an air of maddening ritual. 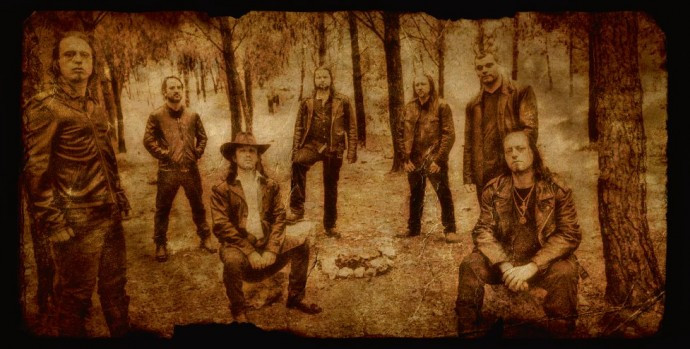 Underwatermoon was also the disc that came to represent much of Winterhorde’s sound: a light fusion of the theatrics of black metal and the melodic leanings of death metal’s grooves, packed in with enough anachronistic folk metal influence that a Winterhorde song often became a three-pronged assault, leaping from death metal to a blackened blast-fest to a soaring power chorus in the span of a minute.

In the gap of time between albums, it seems Winterhorde took a step back — often the type of introspection you see when you have lineups shifting somewhat — and decided to discover what elements were really working for them and what they could then take and contort enough to make work in service of the new disc.

In this situation Winterhorde return as a literal horde, an army of talented musicians unleashing a symphony of insanity. Maestro plays with maddening themes, this time containing its own special bits of drama of an individual raging against god, madness, and a sprinkling of references to Satan. To be fair, although Winterhorde may have toned down the black metal element of their sound a bit between releases, there’s still enough here that Satan has to find himself involved in the hour-long opera about the corruption of another individual, right?

The amount of singing present on Maestro is one of the things that immediately presents itself as different from the band’s prior release — there’s a ton of it on Maestro. Winterhorde are aware that they have some very capable vocalists this time around the block, in the form of returning Nebula-era vocalist Z. Winter and guitar/vocalist Ig Kun, and they manage to get every ounce out of them that they can.

Despite the sudden shift to a hefty amount of operatic cleans in their sound, Winterhorde make it feel natural. Part of this derives from the album’s overall theme, but also from the fact that Winterhorde really play into it — with songs like opener “Antipath” soaring on a massive chorus that recalls Keep Of Kalessin’s more recent power-prog blastfest adventures. 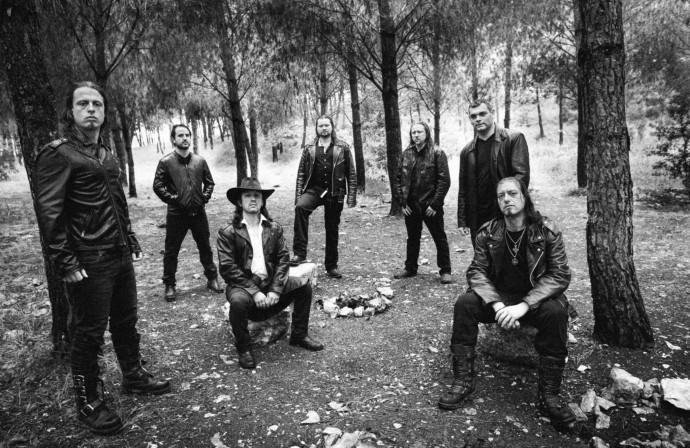 There’s a fair share of growling as well, because the swath of genres that Winterhorde pull from is wide, so songs on Maestro gain a lot of their dynamics from the push-and-pull act, as vocals can be soaring higher than a plane one instant and the next find themselves being snarled with ruthless efficiency.

“Antipath”, as Maestro’s lead-off track, helps build the foundation for what will define much of the album: sudden shifts during songs, a hefty symphonic element slowly weaving its way through every song, and as many vocal styles as possible — resulting in an album that is just as packed to the gills as the group’s previous efforts, but one where that massive amount of matter feels organic to the music.

The song “Chronic Death” actually feels a bit like an identical twin to “Antipath”. Though a bit later in the disc and a bit more dour in terms of mood, the song is still built upon a hefty clean sung + death metal acrobatics formula and humongous melody — the outstretched “Chronic deeeeaaaaaaaaaaaaaaaaaaaaaaaaaaaaaaaaaath” providing its fair share of pyrotechnics on the vocal front.

While “Antipath” is the “power metal by way of grandoise symphonic death champion” opener, follower “Worms of Soul” is the more straightforward headbanger song. NoCleanSinging readers will likely recognize this song as the one we helped premiere a couple weeks back, accompanied by an article where I wrote for the first time many of the same points that I make in this review — so don’t worry if you experience a sense of deja-vu, you’re not going nuts. I’m a hack.

“Worms Of Soul” starts with a snappy opening section, with a vocal line that finds itself either matching or being propelled forward by a blasting drummer who keeps the tempo high during the song’s verses. “Worms of Soul” expands upon the foundation laid by “Antipath”, though, with a clean-sung backing track sidling up alongside a choir element and a horror-movie-worthy theramin bit that, in spite of its warbling nature, somehow manages to still be one of the defining bits of the song, which can be recalled just by thinking about the more punctually delivered “Worms. Of. Soul” chorus that’s rasped out.

The theramin adds a small camp element to Winterhorde’s play, but “Worms Of Soul” is one of Winterhorde’s more traditionally densely packed songs, so it wasn’t too shocking to hear one make an appearance. That they make it work within the confines of the song is the more impressive feat.

After the one-two punch of “Antipath” spilling into “Worms Of Soul”, listeners should be acquainted with Winterhorde’s penchant for sweeping dramaticism, but what makes Maestro such an interesting experience is that the band consistently reach the highs set by those two songs throughout the album’s hour-plus run. At times, Winterhorde go for the head-on approach of trying to top themselves with sheer bombast, and at other times they add another instrument — so that it seems like each song on Maestro could be partially described by the gimmick that runs through it, like describing one of the latter tracks as the one that opens on a saxophone bit.

When you hear the album you’ll know exactly what song I was talking about just then. Each trick pulled from Winterhorde’s hat that isn’t part of the group’s main repetoire gets one usage — often to add more flavor to a song that was already “pretty good”.

With Maestro already bolstered by an excellent group of songs, this is one of the reasons why it’s difficult to divorce yourself from a Maestro listening session. The album plays out like a serialized TV show, where part of your listening is spent wanting to see what the band do next and the direction in which they’re headed — though a closing song being titled “Dancing In Flames” can at least keep that interest tempered somewhere around the level of “foreboding”. (Fire is itself a pretty big recurring theme throughout Maestro, as one of the album’s more narratively involved tracks is a symphonic black metal work called “They Came With Eyes Of Fire”.)

There are a couple of epics in Maestro’s arsenal as well, with “The Heart Of Coryphee” clocking in at eleven-and-a-half minutes (and dead center on the disc, too, an actual centerpiece song on an album). As the epic centerpiece, “Heart Of Coryphee” is easily the most guitar-heavy and dynamic song on Maestro. It sets the pace for the rest of the disc; while the opening tracks are huge and sweeping, things turn dramatically after “Heart”.

Several of Maestro’s longer-running songs come after this one as well, with the title song, “Cold”, and the closer “Dancing In Flames” all sailing in pretty clean around the seven-minute mark. Only the ambient track “A Dying Swan” and “Through The Broken Mirror” (which feels like a bombastic send-up of the first few songs on this album) come in shorter at under three minutes and four-a-half respectively. Surprisingly enough, “Maestro”, with all of the heavy and theatrical songs surrounding it, proves to be something of a power ballad — albeit one that has a backing track of another vocalist black-metal shrieking each line.

Part of me wants to spend this whole writeup breathlessly describing each song on this disc, because each track — save for one or two twin pairings — feels so dramatically different from the others that it’s hard not remain entraptured by Maestro for its whole run — but I fear that this review would then be about as densely packed as Maestro is. Maestro is one of those albums where there is so much packed away in it, so much to discover, that each successive spin has revealed one new thing after another.

Maestro has proven to be a pleasant surprise, as the album has shifted on my radar from a “Oh hey, Winterhorde are playing again” to a “Oh wow, these guys are actually on to something with this album”. Songs that were initially enjoyable interstitials on the way to my highlight songs have since become highlights in their own right, and Maestro has now become one of those dreaded albums where if I cross paths with it on shuffle, I wind up just going down the rabbit hole of letting the whole album go on for a few rotations.

It’s a long and dense album, but one that changes up the play enough in each song that Winterhorde are able to keep a listener locked in with them for the entire run, through the drumming bombing runs to the multiple fiery guitar leads to the slithering bass lines that just seem to sneak up and strangle you when you least expect it. Winterhorde easily live up to the second half of their name, with the army of musicians present on the album, but each one manages to slot in at just the right spot to add to the masterwork which is Maestro.

Maestro was released on May 20 by ViciSolum Productions and is available here: