Inert is the name of a two-man band whose debut EP Obliteration of the Self will be released on June 17. Both members (guitarist Xavier Aguilar and vocalist/drummer Gustavo Garcia) knew each other for many years from the metal scene in Barcelona, Spain, but didn’t join forces in Inert until Xavi moved to Stockholm, Sweden. These days, distance isn’t the impediment to creative collaboration that it used to be — and in the case of Inert that’s a very good thing.

We’re happy to bring you the premiere of the title track to this new EP. It accomplishes an impressive feat: It pulls heavily from some distinct death metal bloodlines, most of them venerable and some more modern, and integrates the stylistic influences in a way that sounds natural and also completely killer. 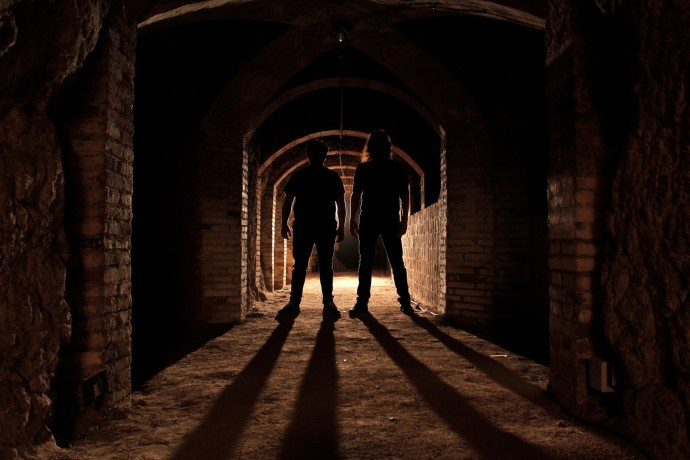 “Obliteration of the Self” is anchored by the kind of vibrating, buzz-saw riffs and d-beat rhythms that bring to mind the likes of Dismember, Grave, and Entombed.  But the song also inspires thoughts of such bands as Morbid Angel, Death, and Bloodbath. It’s also a dynamic track, shifting gears between grim, grisly corpse-crawling and murderous rampaging, with high-octane riffs and electrifying drumwork pushing the pace in a way that will get the blood pumping. And the song also includes a sinuous guitar solo that may come as a stylistic surprise.

It’s obvious from this song that Inert have an impressive level of technical skill as musicians and a talent for songwriting (the track is as catchy as it is morbid and maniacal), but the vocals turn out to be just as compelling — the kind of throaty, mid-range death growls that sound like gargling with blood and gravel, coupled with venomous shrieks and deranged yells.

In a nutshell, this is an eye-opening song that hit us like a bolt from the blue — and there are two more winners on this EP that you’ll be able to hear a week before its release if you come back here in 7 days, because we’ll have a full stream for you on June 10.

Obliteration of the Self will be released on June 17 via Bandcamp. Here’s the track list:

1 Servant of God
2 Obliteration of the Self
3 Son of Certain Death
Running time: 10:16 minutes