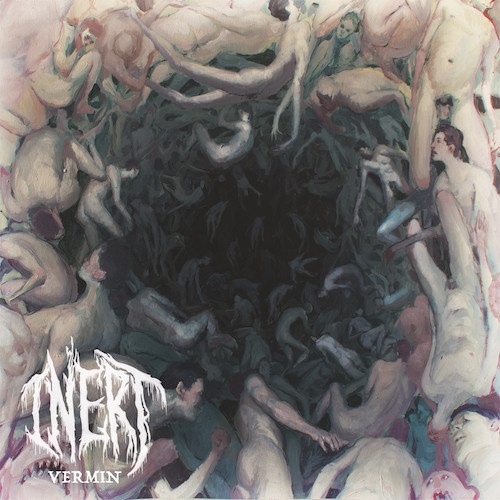 You’re about to witness one of those lyric videos (less common than we might hope for) that provides enjoyment for the eyes as well as the ears. Like many such videos, it’s based upon the album art, and in this case the cover artist Enric Sant has provided some great material to work with, but Scott Ruud did his usual masterful job and turned that wonderfully realized art into a film that grips the eyes, as the vividly rendered words flash by.

Of course, as good as the video is, it is mainly a well-crafted stage-set, and what really counts is what the performers give us. Here, the performers are the Spanish band Inert, whose members are split between Stockholm and Barcelona, and the music is the title track to their debut album, Vermin.

Despite the band’s name, the new album represents change — Inert have expanded from the original duo to a quartet, and the style of the music has shifted as well, and the results are powerful, and exciting, as you will soon discover. END_OF_DOCUMENT_TOKEN_TO_BE_REPLACED

Last June we had the pleasure of premiering Obliteration of the Self, an extremely impressive debut EP by an insurgent death metal duo originally from Spain and now in Sweden who call themselves Inert. Although the EP was originally self-released, Germany’s Neckbreaker Records knew a good thing when they heard it and are now releasing a vinyl edition of the EP, and will also be releasing the band’s debut album either late this year or early in 2018.

The vinyl reissue of Obliteration of the Self is now set to happen on April 14th. In addition to capturing the sounds in multi-colored physical format (remastered for this release), the vinyl edition will also include a bonus track specially written for this release. The name of the new track is “Trading Death“, and today we’re bringing you a lyric video for the song, created by “The Core Inside”. END_OF_DOCUMENT_TOKEN_TO_BE_REPLACED

One week ago we premiered the title track from Obliteration of the Self, the debut EP by an insurgent death metal duo who call themselves Inert, and today we deliver a full stream of the entire EP, which the band are making available as a free download for a limited time.

For those who missed our earlier premiere, I’ll repeat the band’s origin story: Both members (guitarist Xavier Aguilar and vocalist/drummer Gustavo Garcia) knew each other for many years from the metal scene in Barcelona, Spain, but didn’t join forces in Inert until Xavi moved to Stockholm, Sweden. Perhaps something in the Swedish water infiltrated Xavi’s creative juices, but whatever caused this duo to join forces only after considerable distance separated them, we should be thankful for it. END_OF_DOCUMENT_TOKEN_TO_BE_REPLACED

Inert is the name of a two-man band whose debut EP Obliteration of the Self will be released on June 17. Both members (guitarist Xavier Aguilar and vocalist/drummer Gustavo Garcia) knew each other for many years from the metal scene in Barcelona, Spain, but didn’t join forces in Inert until Xavi moved to Stockholm, Sweden. These days, distance isn’t the impediment to creative collaboration that it used to be — and in the case of Inert that’s a very good thing.

We’re happy to bring you the premiere of the title track to this new EP. It accomplishes an impressive feat: It pulls heavily from some distinct death metal bloodlines, most of them venerable and some more modern, and integrates the stylistic influences in a way that sounds natural and also completely killer. END_OF_DOCUMENT_TOKEN_TO_BE_REPLACED