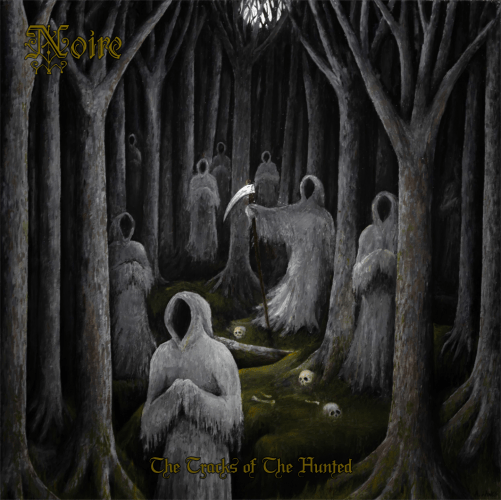 With a 2011 demo and a 2013 debut album (Dark Reverence) behind them, the Canadian band Noire have completed work on a new six-track EP named The Tracks of the Hunted, which they will release on July 8. Today we bring you a premiere of the title track.

While the EP was constructed on a scaffolding of black metal, the completed edifice incorporates diverse materials ranging from ambient-styled sounds to piano and acoustic guitar. The track you’re about to hear is itself a wide-ranging journey, though the softer sounds of acoustic instrumentation were put aside for this dynamic trip. 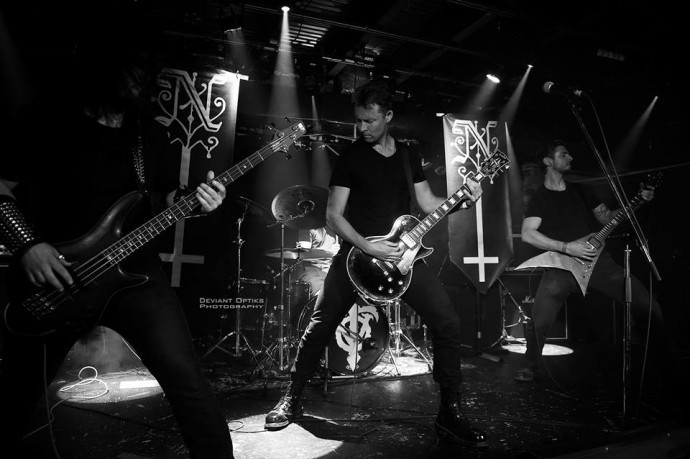 The song unfolds in three “movements”, the first one a galvanizing gallop of dissonant, jabbing riffs, rumbling drums and bass, and swirling arpeggios accompanied by sliding notes and gritty, snarling vocals. In the middle section, the galloping subsides, the music transitioning to a slow cascade of chords with a tension-building melody, as the bass bubbles like a slow-boiling cauldron and clean vocals replace the growls. As the pace and intensity begin to increase, the atmosphere becomes dark and ghostly.

In the song’s final movement, the band give full rein to the progressive tendencies already apparent in the music in a roller-coaster ride of instrumental extravagance loaded with head-spinning dual guitar interplay and acrobatic turns from the rhythm section. The song has a narrative quality, and in good narrative fashion the music builds to a memorable climax.

Noire have identified such bands as Dissection, Enslaved, and Opeth as important influences, and they are evident in the ambitions of this title track — which proves to be a very tempting teaser for the new EP.

As noted above, Noire will release The Tracks of the Hunted on July 8, and it will be available in both CD and digital formats (to help spread the music, the digital version will be available for the modest sum of $1). The album can be pre-ordered here:

In July Noire will also be embarking on a two-week tour of Western Canada leading up to their appearance at the Armstrong Metal Festival and beyond. All dates can be found below.

6 Responses to “AN NCS PREMIERE: NOIRE — “THE TRACKS OF THE HUNTED””