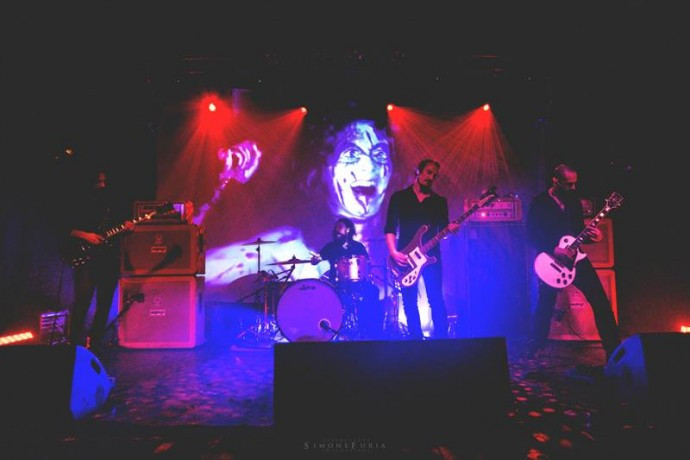 (Comrade Aleks provides NCS readers an introduction to Italy’s Arcana 13 and their album Danza Macabra, with excerpts from Aleks‘ interview of the band at Doom-Metal.com.)

Here’s the short guide for Italian horror cinematograph-with-doom outfit Arcana 13 who dedicated the entire album Danza Macabra to this outstanding genre. Let the horror in!

Arcana 13’s original lineup is a bunch of talented musicians who know what they want and know how to reach their goals. Andrea Burdisso is on guitar and main vocals, Simone Bertozzi plays guitar and sings as well, and then there is Filippo Petrini as bass guitarist and Luigi Taroni on the drums. They’ve all been in the music scene since the ’90s, and they are long-time friends too.

Once, they decided to have some fun and started a Black Sabbath tribute band, just for the pleasure of jamming together without any pressure, and it went on like that for some time. But they all love to compose original riffs and music, so they decided to move further. Luigi adds:

“The chemistry between us is and has always been incredible, so we just couldn’t help starting to compose our own stuff, and it sounded so damn good… this is how the Arcana 13 project saw the light in the dark, and this is exactly what we wanted to do”.

When the  guys were searching for a band name they wanted to keep it simple, short, recognizable, and preferably an Italian one. So after throwing some ideas on the table, they came up with Arcana 13, the thirteenth tarot, Death itself. Its meaning is not necessarily negative or creepy, as it also represents the end of a cycle and the beginning of a brand new one. Add that the band was born in 2013 and the work was done!

The Danza Macabra album was recorded at Studio 73 in band’s hometown, Ravenna. Luigi continues the story:

“The boss that managed to put together our doom vibes and the wall of analogue synthesizers was our good buddy Riccardo Pasini, master of analogue sounds and vintage attitude with a modern feeling. He also produces some boutique pedals and made special fuzz for this record, which we recorded with and will also be using live!

“The songs were created in a unique composition process, playing and jamming along with the visuals on screen, in our rehearsal place, and it took more or less 2 years, not being in a hurry, and then we just recorded it in about 2 weeks. We are fans of the vintage sound from the seventies, so we decided to use old amps and instruments, which are the same we will use in the live shows. We need to say that the record features several original ’70s and ’80s organs and synths arranged and recorded for us by our friend Steve (Stefano Scanu) of the band Hierophant”. 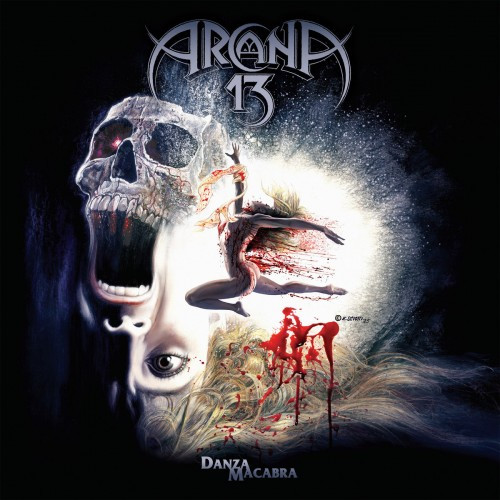 As doom rock with a dark or “occult” vibe is a trendy genre now, with Danza Macabra the band tried to create something new: Eight legendary movies were meticulously chosen for their specific atmospheres and, around each flick, eight songs took shape. Arcana 13 adopted a unique composition process where music and movie edits were conceived together along with the visuals post-production, with the intention of creating an exclusive horror-themed live show to be brought to fruition in the coming weeks. That’s the way they try to stand out.

There are also speech samples from the original movies in the Italian language in the songs; certainly, it helps to create the necessary atmosphere. Melodic and mysterious, Danza Macabra has a lot of excellent tunes to offer. The keyboard parties inspired by the masters of horror movie soundtracks, Goblin, bring the suspense alive in some songs. This good and old hard-rocking doom material could be a pure example of the ideal balance of sound and heaviness; it is something catchy and appealing — just like evil!

Arcana 13 – Hell Behind You

Here’s the list of movies Arcana 13 accompanied through their music. La Maschera del Demonio aka Black Sunday by Mario Bava for the song “Dread Ritual”; L’Arcano Incantatore aka The Mysterious Enchanter by Pupi Avati for “Arcane Xlll”; I Quattro dell’Apocalisse aka Four of the Apocalypse, a western/horror movie by Lucio Fulci, for “Land of Revenge”; Holy Mountain which is the only non-Italian movie, by Alexandre Jodorowsky, for the song “Oblivion Mushroom”; Suspiria from maestro Dario Argento for the homonymous song, inspired by the main theme written by the mighty Italian prog band Goblin; then we have The Beyond aka …E tu vivrai nel terrore! L’aldilà by Lucio Fulci for the song “Blackmaster”; City of the Living Dead aka Paura nella città dei morti viventi for the song “The holy cult of suicide”; and the last one, Inferno by Dario Argento for the song “Hell behind you”.

“If you have ever wondered how Pentagram would sound over a Lucio Fulci movie, give Arcana 13 a try. Hail Horror!”