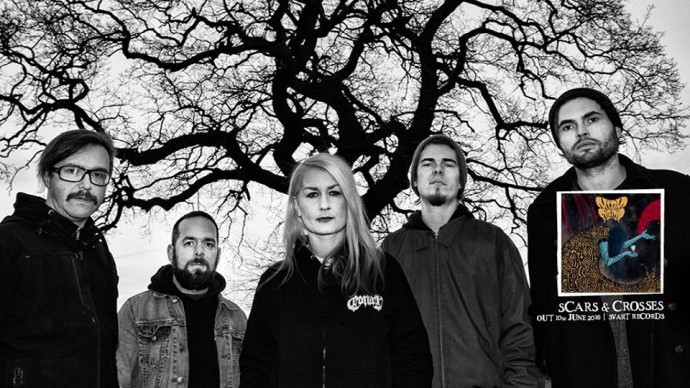 (In this post Comrade Aleks combines excerpts from his interview with the German band High Fighter and thoughts about their debut album Scars & Crosses, due for release on June 10 by Svart Records.)

Mona Miluski (vocals) and Christian Pappas (guitars) started together in the heavy stoner band A Million Miles, but the band split up in early 2013, only a couple of days right after they released a first full-length album and after they had been together for more than 5 years.

It took Christian and Mona almost a year to get back on their feet in music. In the beginning of 2014, they started to look into founding a new project, when Ingwer Boysen joined ’em as the lead guitarist. His current band at that time, Buffalo Hump, had no singer at that point, so there was a bassist and a drummer left — all they needed to complete a new band line-up. So it was Ingwer who came up with the idea of bringing Constantin (bass) and Thomas (drums) into the new project that later would become High Fighter.

Mona tells us about the first phase of the band’s life:

“We started jamming heavily and we don’t follow any strict rules when it comes to our songwriting or band performance. We don’t try to fit into any specific genre, we just let it happen. Our style and personal tastes have their roots in desert rock, blues, sludge, metal, and doom, while always staying very open-minded to more influences.

“And since goats simply rule, and stand for a lot of themes we cover in our riffs and lyrics, the combination of this band line-up, our first and also very dark EP The Goat Ritual (self-released in 2014), as well as its artwork, totally fit together”.

High Fighter prepared for this record a dirty, quite sludgy sort of doom metal with an absolutely heavy blues vibe. They recorded these five songs live and on one weekend in their rehearsal room with a good friend Benjamin Kapidzic (Skythen), who also mixed and mastered this EP. No studio, no editing, no high-class, over-polished production — just High Fighter united with the righteous idea of loud and heavy doom-laden music.

It has been important for them right from the beginning to present their true live sound. The demo is rough, with many various styles and vibes that you will find on it, very melodic and catchy but so dark, mean, and heavy on the other side. 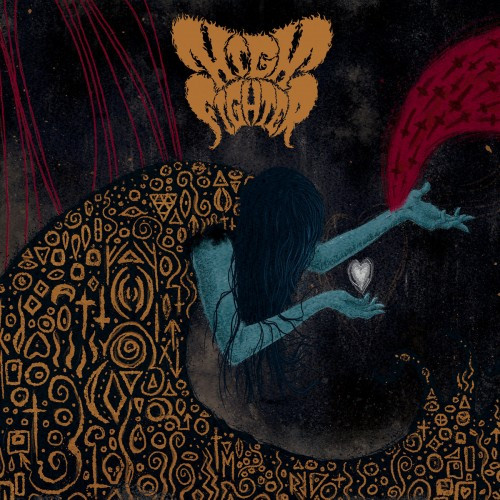 Two years passed after The Goat Ritual was released, two years of cool gigs and composing. High Fighter has now returned with new forces and full of energy. The full-length album Scars & Crosses is a higher level for the band, which has already gained a proper reputation amongst their peers. The new album probably has a hint of more doom on it, yet it combines various styles, from blues through sludge and desert rock to doom and stoner metal trips. Its musical palette is fuzzy, heavy, mean, and straightforward.

Scars & Crosses was recorded by Jens Siefert in Rama Studio (he previously worked with Ahab), and Toshi Kasai mixed and mastered the album. Since High Fighter recorded the instrumentals on the album live, they had all 8 tracks written before they entered the studio. They had also played most of the album’s songs live on stage before, so they were in a quite well-prepared mood for the studio from the beginning.

“Scars & Crosses deals with a dark past, about the wounds and scars of your soul that life may have given you. It’s about your inner demons, a life between heaven and hell; this is why I also chose the cross as a symbol or metaphor as the roots of all evil.

“But it’s also about learning to live with those scars. Even people in society or in any relationships will find your scars as a bad attitude, a bad character. On this album we say, no, it’s not. Learn to also love those who have their scars, we all have them… these darkest days, moments and demons in life, your entire history, our scars engrave us, they belong to you as much as the good sides”.

To stream the new album in its entirety, go HERE.