As I’ve mentioned before, I wasn’t listening to extreme metal in the late ’80s or the ’90s. With the help of some knowledgable guides, I’ve spent time over the last decade trying to catch up on what I missed. It’s a deep history, and the process of exploration isn’t nearly finished. Today’s Rearview Mirror focuses on my most recent discovery (with thanks to Jan K. once again for turning me on to the album you’re about to hear).

Obtained Enslavement was a black metal band formed in Stord, Norway, in about 1989. The band’s founding members included Pest (who went on to become the frontman for Gorgoroth both before and after Gaahl), guitarist Døden, and drummer Torquemada, and they were soon  joined by a phenomenal keyboardist who used the name Heks. Together they recorded two demos and four albums before disbanding (though additional musicians also participated on some of the albums). 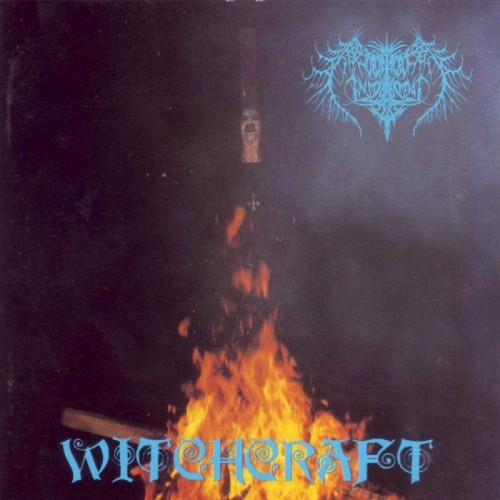 I’ve only heard one of the albums so far, 1997’s Witchcraft, which was the band’s second full-length. The music is easily labeled “symphonic black metal”, but it merits the label in ways that are far more significant and meaningful than the music of most bands who have been so classified. The songs are tremendously intricate and sophisticated, such a rich and detailed tapestry of sound that although the album is immensely impressive from the very first listen, there’s really too much happening to fully comprehend and appreciate without multiple sessions.

The interplay of the metal instruments and the orchestral voices is complex, with the instruments often playing off against each other and with different classical instruments playing lead roles (including the booming sound of timpani). You really do get the feeling that there was a metal band performing in the studio with a live symphony orchestra, joined in bringing to life a singular kaleidoscopic vision. And although the symphonic arrangements play an enormous role in the album, the riffs and tremolo leads aren’t overshadowed — they’re just as good and just as vital to the album’s power and appeal. And Pest’s acid snarl is in fine form, too.

This album doesn’t just burn, it blazes. I’m having trouble thinking of any other album of symphonic metal, regardless of genre, that climbs higher than this one in integrating the two forms and exploring the possibilities that such a union might produce. Oy maybe I’m just so carried away by what I’ve heard that I’m forgetting something. Perhaps it will carry you away, too.