The album includes one EP-length track by Ævangelist named “Threshold of the Miraculous” and four tracks by Blut Aus Nord, which are themselves parts of a unified work called “Spectral Subsonic Waves (The Sound is an Organic Matter)”. Each piece stands alone, yet they achieve the ideal for a split release of any kind: They complement each other in ways that enable them, together, to magnify the impact that each produces separately.

Both of these two long pieces, in different ways, reach for new ways of expression, new ways of manifesting not only the nightmarish incantations of black metal and death metal, respectively, but also the pain, peril, and potentials of isolation as the wellspring of new realities .

Both of these musical works confound expectations and twist together divergent strands of musical expression that aren’t usually found together, braiding them into songs that are hallucinatory, poisonous, chaotic, despairing, and defiant. Predictably, they will leave some fans of each band stalking away in frustration. For others, they will open new doors, either into personal hells from which escape seems foreclosed or into a world beyond those hells in which agony becomes a source of strength, like night-blooming orchids rooted in poisoned earth.

You can think of “Spectral Subsonic Waves” as a suite in four interconnected parts.

The sound flows into “Resonnance(s)”, which is even more dissonant, dark, and disturbing. The crack of drums and the chasmic, rolling thrum of bass tones provides the pulse, while incandescent, tension-ratcheting notes and ritualistic chants magnify the sense of spiraling down into a drug-induced dementia.

That sense of falling into a zone of paranoid psychosis persists in “The Parallel Echöes”, with waves of dense, multi-layered, dissonant noise clawing at your stability as the persistent rhythmic beat that propels all four songs continues to hammer away, and bestial growls accompany pulsating, schizophrenic chords.

By the time the fourth part arrives, you may have become intensely curious about how this very strange trip will end. And “Infra-Voices Ensemble” draws the suite to a close with a potent industrial/techno beat and a psychoactive haze of withering discordance and the sonic violence and detritus of minds tearing themselves apart. It’s both spell-binding and vertiginous.

Perhaps more than most music, “Spectral Subsonic Waves” is subject to varying interpretations. It will resonate in different ways depending upon what each listener brings to the experience. For many, if not most, it may be the nourishment for nightmares. 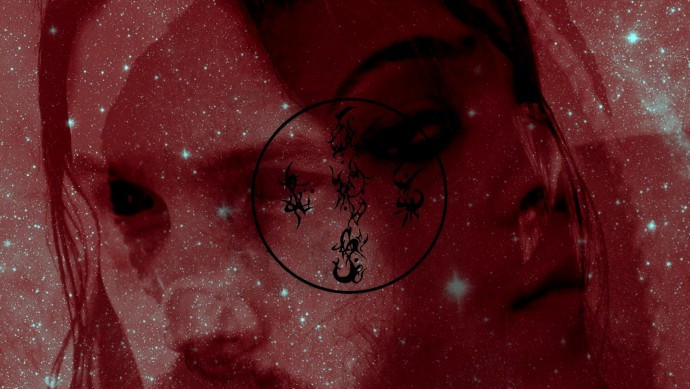 ÆVANGELIST: “THRESHOLD OF THE MIRACULOUS”

In May we premiered an excerpt of Ævangelist’s song, and I’ll crib here from what I wrote then about the piece as a whole.

I’ll crawl out on a limb and say that for all the remarkable and terrifying music that Ævangelist have produced to date, here they have scaled their Everest; this is their best work yet. It is a vast and dappled canvas of imagination. Listening transports the mind, sinking it in an ink-black sea, yet buoyant and lit by the glimmer of phosphorescence. It is horrific, yet resilient, and paradoxically the spark of indomitable life in this enveloping chasm of death is a large part of what makes the song so striking.

It’s mercurial and marvelous, intense and gripping, stabbing toward a new creative style. There is massive distortion, a dense layering of notes and tones, clanging noises, like a mixture of dragging chains and dismal moans, like the sensation of being tied down and wrenching to be free.

There are blasting drums and demented chords, discordant notes and shrieking voices, dismantling melodies and mind-melting hallucinations. You become a participant in the throes of a mental breakdown, almost obscenely intimate but emotionally gripping in a way that’s unavoidable.

Pulsing rhythms mix with eerie melodic emanations; morose spoken words mix with abyssal growls. The music is craggy and tumultuous; it generates the searing heat of volcanic floes; and it’s doomed and dragging, a black horror rent with the pain of scars and the urgent need to express that pain.

And, as was true of Blut Aus Nord’s suite, the song also includes a cacophony of industrial beats and deranged electronic noise — along with funky bass notes and spectral rap cadences, the heartbeat rhythm of spoken words against a chiming cosmic ambience.

But as catchy and primal as those segments are, the music soon veers away from the natural pulse of blood and plunges into a sea of chaos and disease, accompanied by grim, serrated roars and demented shrieks that are acidic enough to boil the skin.

Yet in the end, there’s a balance in the music. At least to these ears there’s a timbre of hope pulling hard against the gaping chasm of death. The funky rhythms and neck-snapping drumbeats are like a life raft in a merciless storm, the sparkling notes glimmering like shooting stars or the cascading waves of aurora borealis in a pitch-black sky.

Both of the works on this split seem like invitations to let go — let go of expectations about what extreme metal is supposed to sound like, surrender presumptions about what kind of music each of these bands is supposed to create, and cut the chords of thought and emotion that tie you to your assigned place in the world around you. I can’t promise you’ll get what’s going on here. It may take more than one listen for the music to take hold in your mind — and I’m sure that for some listeners it never will. But if it does connect with you, I suspect you’ll find it one of the most interesting and powerful releases you’ll hear this year.

To repeat, Codex Obscura Nomina will be released on June 17 by Debemur Morti. It’s available for pre-order on digipack CD and as as a digital download through the link below. A vinyl edition will also be forthcoming. The artwork was created by Daniel Valencia from Fenomeno Design.

22 Responses to “AN NCS PREMIERE (AND A REVIEW): BLUT AUS NORD AND ÆVANGELIST — “CODEX OBSCURA NOMINA””