Terra Tenebrosa’s new album The Reverses is home to the kind of music that inspires metaphors and similes. Trying to describe it without resorting to the language of imagery, sensation, and emotion would be inadequate. Its effect is far greater than the sum of its musical parts — even though a multitude of interlocking (and discordant) parts have been joined together to produce what you hear.

The Reverses is as heavy, as dense, and as radioactive as a cache of transuranic elements. It’s a visit to a nightmare realm where the shadows have teeth, the surreal musical equivalent of a Hieronymus Bosch landscape, a vision of hell, or perhaps the exorcism of hellish visions. It sinks its talons into the twisted nightshades that grow in the darker corners of the human psyche and shakes them until they quiver with fearful and fearsome excitement.

The album’s seven tracks, which range in length from two minutes to 17, make use of similar musical ingredients. The songs are propelled by huge, hammering, quasi-industrial beats and teeth-rattling drum progressions, often doing their demolition work in extended loops, operating in conjunction with grinding bass lines deep and destructive enough to vibrate your spine. At times, those pile-driving beats and rumbling progressions seque into booming tribal rhythms that lend the music a ritualistic air.

Around those head-grabbing, body-moving rhythms swirls a cyclone of abrasive sound, a persistent gale of distortion that simulates the savagery of ravening monsters. Even the drum beats and shimmering cymbals seem to crack and sizzle with static. Riffs rake, slash, and pound like pile-drivers. Eerie keyboard excretions come and go like fleeting alien messages from a distant star; there’s a melody in “Where Shadows Have Teeth” that sounds like it’s being played on a set of chimes.

Deep, warbling tones and the sounds of phantasmagoric wailing surface and then subside. Ominous melodies heave and groan through the maelstrom like a storm surge. A vast array of paranormal sounds slither, swirl, and claw at your mind, ratcheting the tension to the breaking point. They sound like field recordings from purgatory.

Even when the compulsive beats go silent and the dense, multi-layered hurricane of sounds diminishes, usually near the end of these terrifying squalls, there is no reprieve. The spectral, sometimes trance-inducing ambient passages that arrive in those moments are no less disturbing; you are in the company of ghosts and goblins, and like the shadows, they also have teeth.

The array of distorted vocals in The Reverses is just as multi-layered and inhuman as the instrumental music. It’s a convocation of demons and lost souls, like a choir of voices from The Evil Dead. Ever-changing, the vocals range from acid whispers and strangled gasps to panther-like snarls, bestial growls, and horrific shrieks.

There is no peace in this album, but for all its persistently harrowing and horrifying atmosphere, it is undeniably fascinating and poisonously addictive. See for yourselves… just press Play below. 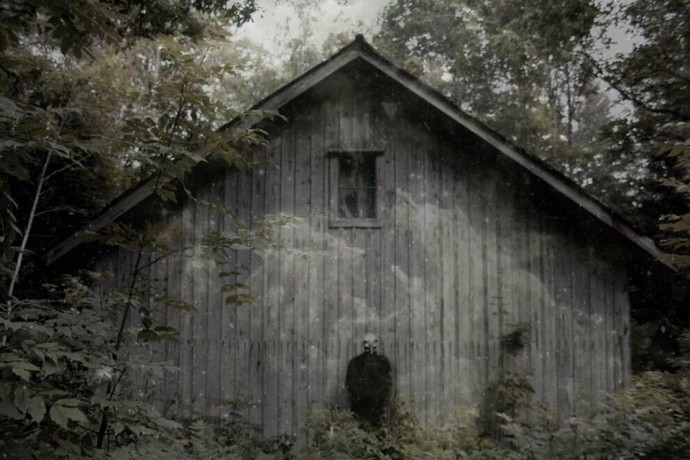 The man at the center of this nightmarish creation takes the name of The Cuckoo, a being that has persisted in his imagination since childhood. As he explained in an interview, “The Cuckoo is both a beacon of hope and an instrument of destruction. He is an outstretched hand and he welcomes you into his open arms but he will also whip you to shreds unless you move forward.”

In this new undertaking, The Cuckoo seems to have worked alone as the sole member of Terra Tenebrosa, but the album also features appearances by some notable guests: Jonas A Holmberg (This Gift Is A Curse), Alex Stjernfeldt (The Moth Gatherer), MkM (Antaeus, Aosoth), and Vindsval (Blut Aus Nord).

The Reverses will be released on June 17 (June 22 in North America) by Debemur Morti. It was recorded and mixed by Terra Tenebrosa and mastered by Karl-Daniel Lidén. The album art was created by Jonas A. Holmberg.

And now, enter the nightmare realm of The Reverses, as we bring you the premiere of a full album stream.

8 Responses to “AN NCS ALBUM PREMIERE (AND A REVIEW): TERRA TENEBROSA — “THE REVERSES””