There’s a chance that Thrawsunblat will always live, at least in part, in the long shadow cast by the much-beloved Woods of Ypres — or perhaps will always be buoyed by that band’s legacy, depending on how you look at it. Apart from the presence of Woods‘ guitarist Joel Violette, Thrawsunblat also drink from the dark, crystalline wellsprings of melancholy that fed Woods of Ypres’ sublime creations. Yet from the beginning Thrawsunblat have also sought sustenance, and given spiritual sustenance to their listeners, through other musical traditions. The evolution of the band’s sound continues — and reaches a high-water mark — in their new album Metachthonia, which it’s our great pleasure to premiere for you today, one day in advance of its official release.

We are told that “Metachthonia” is an ancient Greek word that means “the age after that of the Earth,” which can be understood as a reference to today’s modern world. In taking that word as the title of this new concept album, Thrawsunblat signify an effort to express a yearning for elements of the natural world, both physical and spiritual, that have been shoved aside by the encroachments of technology and the ant-like scrabbling of human industry. And the result is a wild, beautiful, and inspiring album.

(Take a good look at the album cover — it provides significant clues to what lies within.)

The six long songs that make up Metachthonia follow a narrative progression that begins with the beautiful, heart-aching strains of Weinroth-Browne’s cello at the opening of “Fires That Light the Earth” — a song that soon erupts in a bonfire of jolting rhythms and swirling, folk-influenced melody, with Violette’s guitar sometimes resembling the skirl of Highland pipes in union with the dizzying whirl of the cello. It’s a stirring and even heroic way to start the album, a hell-for-leather gallop with vocals that move from harsh, savage, warlike cries to soaring clean melody. Yet even in this pulse-pounding opener, there are moments of somber beauty voiced by acoustic guitar and the more reflective side of the cello.

The kaleidoscopic richness of “Fires” is reprised throughout the album. The track that follows immediately, “She Who Names the Stars”, should be familiar through its earlier premiere. The song has a pronounced rainy-day atmosphere, but when the vocals soar in the magnetic chorus you can feel your heart soar as well, and when the riffing starts to slash, the drums begin to blast, and the morose clean vocals turn to jagged snarls, your pulse will quicken again. There’s a heart-aching cello melody in the song and a lilting, layered guitar instrumental that help etch more fragments of forlorn beauty into your memory in a song that also carries its fair share of despair. (As elsewhere, the song also boasts a riveting performance by the rhythm section.)

With a name like “Dead of Winter”, you may be expecting something slow, chilled, and grief-stricken. What you’ll get instead is another powerhouse torrent of warlike, folk-influenced black metal, again laced with sublime cello melody (and racing bow-work) and featuring another heart-swelling and intensely memorable chorus melody. There are dark moods in the song, to be sure, as well as a lively duet of acoustic picking and bass thrumming, but in the main there is nothing dead or wintry in this surging, explosive outpouring of passion. (Yes, do look at the album cover again — a bonfire blazes in that dark forest.) 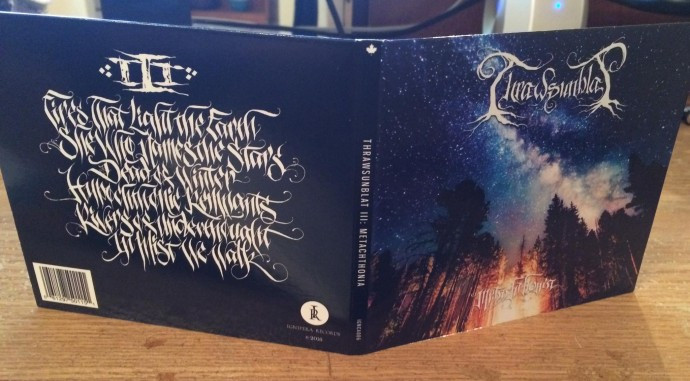 The ripping ride continues in “Hypochthonic Remnants”, which features a jittery, skittering central riff and gut-punching bursts of double-bass along with the tag-team of scarring acid snarls and folk-like clean vocals. At the halfway point, the song also  features perhaps the most electrifying guitar arpeggio on the album as the music kicks into overdrive — only to end with soft acoustic picking.

“Rivers of Underthought” at first bounces with life, the strings sounding like a fiddle at a woodland dance. And even when the metal instruments join in, the music continues to swirl and swing — and to jolt and thunder as well. The trilling guitar melody that surfaces again brings to mind the sound of pipes before transforming into a truly epic solo, as the song begins to take on the panoramic sweep and majesty of a pagan saga. Like all the songs on Metachthonia, this one is also a multifaceted creation that includes a softer, contrasting guitar instrumental in the second half, as a prelude to a blood-pumping finish.

Wild, fiery intensity remains at the core of the final track, “In Mist We Walk”, with the song whipped into a frenzy by the rapid swirling of the strings and bone-rattling gallop of the rhythm section, not to mention the combination of hard-jabbing riffs and grand, glorious melody. But this song is also the place in the album where the band perhaps most fully indulge their folk leanings, with a song within a song that aligns with the album’s overarching concept.

Metachthonia will be released June 17, both digitally and on CD, by Ignifera Records; a double-LP edition will later be released through NY label Broken Limbs Recordings. To order the album, visit this location:

7 Responses to “AN NCS ALBUM PREMIERE (AND A REVIEW): THRAWSUNBLAT — “METACHTHONIA””